Republicans are contending that the nearly won the Virginia Governor's race by emphasizing Obamacare in the closing weeks, but the evidence supporting that contention is far from clear. 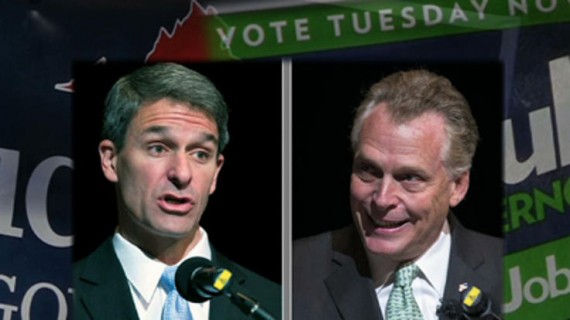 Despite having lost the Virginia Gubernatorial Election, Republicans are claiming something of a political victory in the race nonetheless. Essentially, they say, Terry McAuliffe nearly lost the election because of the Cuccinelli campaign’s decision to focus on the Affordable Care Act during the closing weeks of the campaign, especially in the wake of the failures that became apparent after the October 1st signup date:

The main news stories of the last two weeks of the race were about the botched rollout of the health exchanges and troubling revelations about people getting kicked off their health plans.

Cuccinelli called the off-year election a referendum on Obamacare at every stop during the final days.

“Despite being outspent by an unprecedented $15 million, this race came down to the wire because of Obamacare,” Cuccinelli said in his concession speech Tuesday night.

When President Barack Obama crossed the Potomac for McAuliffe on Sunday, he glaringly avoided even mentioning his signature accomplishment — trying instead to link Cuccinelli with the federal government shutdown.

Exit polls show a majority of voters — 53 percent — opposed the law. Among them, 81 percent voted for Cuccinelli and 8 percent voted for Libertarian candidate Robert Sarvis. McAuliffe won overwhelmingly among the 46 percent who support the health care overhaul.

Cuccinelli actually won independents by 9 percentage points, 47 percent to 38 percent, according to exit polls conducted for a group of media organizations. They made up about one-third of the electorate.

At first glance, it’s a compelling argument. For more than a month, the race in Virginia seemed to be slipping out of Ken Cuccinelli’s hands as poll after poll showed Terry McAuliffe riding a consistent and building lead while Cuccinell’s own numbers remained stubbornly stagnant. Things got worse for Cuccinelli when Congressional Republicans decided to engage in a foolish strategy involving a government shutdown and the pledge to defund Obamacare. As the shutdown dragged on, polling in the Commonwealth showed Cuccinelli being hurt by the shutdown even though he was clearly distancing himself from the entire strategy and from its chief architect, Ted Cruz. After the shutdown ended, though, and public attention began focusing on the problems with the Obamacare website, there was at least some evidence that the race was tightening in Cuccinelli’s favor. At the time, both I and other observers attributed this to the natural tightening you see in any political race. However, with the race now over and the final results far closer than nearly any poll was predicting, the idea that pushing the Obamacare theme as the Cuccinelli campaign emphasized that theme somehow helped close the gap seems like a natural conclusion to reach. Indeed, that theme was a Republican talking point by early this morning.

Greg Sargent was among the first to push back on the entire premise of this argument:

It’s hard to look at last night’s results as a definitive declaration of public opinion on Obamacare either way — whether for or against. The only conclusion I think you can begin to draw from the results is that an absolutist position against the law doesn’t command sufficient support to win statewide in Virginia, a state that is widely seen by observers as a key indicator of national demographic and political trends. The law is probably still on probation with many voters, but the law’s most ardent foes are wrong — they just don’t represent a majority or mainstream position.

According to the exit polls, only 27 percent of Virginia voters saw the health law as the top issue, and among them, only a bare plurality (49-45) supported Cuccinelli. Far more (45 percent) named the economy.

It’s certainly possible rollout problems shifted the outcome a bit; even some Virginia Dems believe this. But the unabashedly pro-Obamacare candidate still won the race. This, even though an unresolved Obamacare policy question — whether the state should opt in to the Medicaid expansion — was a key issue in yesterday’s election, one that McAuliffe frequently cited, and even though the voting occurred at precisely the moment when the crush of anti-Obamacare press was about as bad as it can get.

If we must draw a conclusion about Obamacare here, it probably should be that scorched earth opposition to it isn’t nearly as widespread or fervent as its foes claim. But many of its most ardent opponents are impervious to the realities of public opinion — inside their bubble, the American people supported the government shutdown.

In another post, Sargent posted that McAuliffe’s chief pollster claimed that Cuccinell’s stance on the PPACA actually cost him votes in the election, but that seems to be based more on their own internal polling than on the results of the election itself so it’s unclear how robust that pollster’s analysis actually is.

Even using exit polling, it’s hard to state for certain what motivated voters as they went to the polls. Indeed, exit polling itself is meant to be interpretive of election results and not definitive, so they should be taken with a grain of salt when trying to figure out the question of why voters went for one candidate or the other. In most cases, and with most voters, there are typically a number of motivating factors rather than just a single on. So, while it’s probable that the problems with the Affordable Care Act motivated some people to some degree, it’s hard to say that it was really a deciding issue. Moreover, the fact that McAuliffe explicitly said in the campaign that he favored expanding the law’s reach in Virginia by taking advantage of the Medicaid expansion provisions and still won, suggests strongly that the law didn’t play as big a role in the race as Jomblowski and others would like to believe As I said this morning, it’s more likely that what happened in Virginia is more a reflection of the fact that, even with two Obama victories, two Democratic Senators, and Democrats holding at least two of the three statewide Constitutional offices, Virginia is still a purple and competitive state. Had the Republicans nominated a candidate that didn’t alienate Independent and swing voters the way Cuccinelli did, they likely would’ve done much better than they did