Does Media Coverage of 2020 Distort Reality?

A Washington Post columnists tries to make the case. 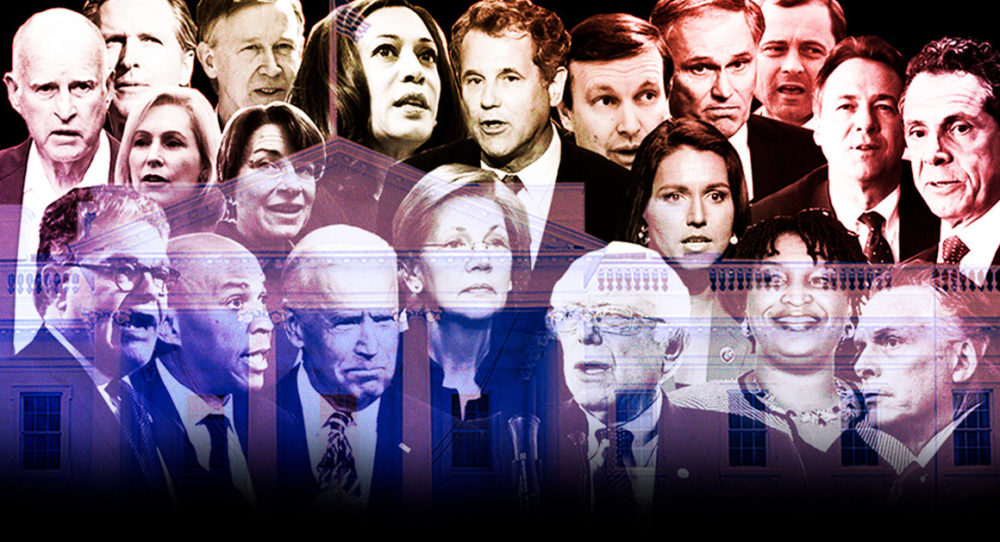 Jennifer Rubin‘s lament about “The media coverage vs. reality in the Democratic primary race” is rather bizarre.

If cable-news coverage matched reality, former representative Beto O’Rourke (Tex.) and Sen. Bernie Sanders (I-Vt.) would be leading the race for the Democratic presidential nomination. The latest Morning Consult poll tell us that, among all primary voters, former vice president Joe Biden (35 percent) maintains a big lead; Sanders is second at 25 percent; and Sen. Kamala D. Harris (Calif.), O’Rourke and Sen. Elizabeth Warren (Mass.) are bunched behind Sanders at 8 percent, 8 percent and 7 percent, respectively. If you believed the coverage of her management techniques, you might think Sen. Amy Klobuchar (D-Minn.) was kaput. Yet she’s tied with South Bend, Ind., Mayor Pete Buttigieg, who gets far more coverage, at 2 percent, just behind Sen. Cory Booker (N.J.) at 4 percent.

None of this is predictive of what will happen next February when votes start to be counted, but it certainly does not equate to the amount or tone of a lot of the coverage.

The gap between coverage and reality is even more pronounced in early states where the current results show: Biden (38 percent), Sanders (27 percent), Harris (8 percent), O’Rourke and Warren (7 percent).

If coverage matched not only these numbers but crowd size, the narrative of the race would go like this: Biden, who has yet to officially enter the race, remains the clear favorite despite all the talk about the energy on the left wing of the party. Sanders, with 100 percent name recognition and a previous presidential campaign under his belt, hasn’t moved even after entering the race and raising a ton of money.

Given the diffuse nature of the modern news media, I haven’t the foggiest how one would go about establishing how much coverage a given candidate is getting. Front page stories in the Washington Post? Minutes on network nightly newscasts nowadays watched mostly by geriatrics? Appearances on Stephen Colbert? Rubin seems to think “cable news coverage” is the metric but, again, there are multiple channels, none of which have particularly large viewership.

Still, it’s undeniable that Beto O’Rourke and Pete Buttigieg are engendering enthusiasm in media circles disproportionate to their showing in the national polling. But that’s hardly surprising. Both are young, interesting candidates who are unknown to the electorate. There’s really not that much new to write about Joe Biden, who’s been on the national scene for decades.

Warren, far from out of it, is matching Harris and O’Rourke stride for stride. While the media generally ignores much of what she actually says, her impressive list of policies all aimed at “unrigging” the system — e.g., ethics reform, a child-care plan, a wealth tax, an anti-monopoly bill aimed at Big Tech and a housing plan — puts her opponents to shame. Rather than obsess on her “likability” (voters like her so far just about as much as they like Harris and O’Rourke), they might cover what she says and start pressing other candidates for more specifics.

Warren is indeed interesting if something of a single issue candidate. But it’s weird to complain that O’Rourke is getting more coverage than his place in the polls warrants and then complain that Warren is getting insufficient coverage when she’s two points behind him in the RealClearPolitics aggregate. That someone who would have been considered a frontrunner in 2016 is behind an upstart strikes me as a real sign of trouble.

Of all the candidates, Harris has moved the most dramatically and held her place as a top-tier candidate. Her crowds number in the thousands. On a personal level, she is the warmest and most emotionally present when interacting with voters. Of all the candidates, she looks like she is having the most fun. She has rolled out two meaty plans (on taxes and raising teacher pay) which put her behind Warren in the wonkiness race — but ahead of most everyone else.

Okay. But, again, I don’t see what the trouble is. When has wonkiness been a path to the White House?

Sanders has his solid group of rabid defenders but shows no real sign of having expanded his reach since 2016. If a candidate can capture the 40 percent or so of Democrats who say they are moderates, or the majority (54 percent) who want the party to be more centrist plus a smattering of progressives, it would put Sanders at a severe disadvantage.

Okay. But he’s still polling just behind Biden nationally and at nearly two and a half times Harris’ third-place number.

O’Rourke got a ton of media coverage and raised a boatload of money. In regards to polling, he’s about where he was before he entered the race. He’s begun to provide more answers to policy questions but his entrance, so far, has not transformed the race to the degree that coverage suggests.

Again, O’Rourke is a new kid on the block. That he’s vastly outpolling Booker, Klobuchar, Castro, and Gillibrand—all of whom have been on the national scene far longer—is an indicator that coverage of him is well-placed.

You see, the reality of the race is more boring, less hyperactive and more issue-focused than what you get from watching cable news. Harris is under-covered given her success to date. Warren has been pigeonholed as a loser by the media, but still draws sizable crowds and is far and away the most substantive.

Rubin continually engages in the Pundit’s Fallacy here. In reality, very few people care about policy details. The fact that Warren is something of an afterthought in the polling right now despite Rubin’s perception of her as “far and away the most substantive” would seem an obvious indicator of that.

Beyond that, aside from those of us who are political junkies, most people just aren’t paying that much attention to the presidential campaign right now. Indeed, Rubin’s close seems to recognize that:

Well, sure. There’s not really a story right now. Candidates are either introducing or re-introducing themselves to the most politically active members of the society right now. And that decidedly includes political journalists.

It’s still over ten months until the first votes in 2020 are cast in the Iowa Caucuses. It’s almost a year until Super Tuesday, which will likely eliminate all but two or three candidates. Most of the people currently soaking up cable news coverage won’t make it that far.