With just over a week to go, the New Hampshire primary is being dominated by a bombastic New York celebrity and a septuagenarian Vermont socialist. 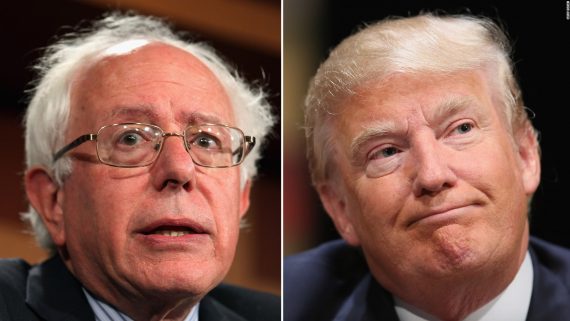 While the attention for today will be focused on the Iowa Caucuses, as soon as the results are announced tonight attention will shift to the Northeast and the New Hampshire Primary next Tuesday. Given the fact that meteorologists are forecasting a nasty snowstorm starting late tonight in parts of the Hawkeye State, it’s likely that all but the top candidates will end up leaving the state earlier than planned so they aren’t wasting time sitting around an airport of hotel room tomorrow, in fact, and the discussion tomorrow will switch to what impact the results in Iowa will have on the race going forward, and specifically on the race in New Hampshire. Before we get there, though, the polling right now continues to show that the Granite State is dominated by Donald Trump and Bernie Sanders.

First up, the last CNN/WMUR poll shows Trump and Sanders with solid leads in their respective races:

Bernie Sanders and Donald Trump maintain wide leads in their respective primary races in New Hampshire, according to a new CNN/WMUR poll conducted by the University of New Hampshire Survey Center.

On the Republican side, Trump continues to hold more than double the support of his nearest competitor, while the race for second and third place remains muddled: Just 6 points separate the second place candidate from the one in fifth place.

Still, the sense of Trump’s inevitability has grown, and two-thirds of likely GOP primary voters now say they expect the businessman to win the state’s primary. No other candidate hits double-digits.

That larger group of moderate and liberal likely primary voters is less settled in its choices (35% say they’ve definitely decided, compared with 42% of conservatives), and less likely to back either of the two national front-runners – Trump and Cruz.

A majority of conservative likely voters say they support either Trump or Cruz, while the same two candidates combine for less than 30% of moderate or liberal primary voters. John Kasich lands in second place among the moderate or liberal group with 15%, Rubio has 11%, Christie 10% and Bush 9%.

Trump continues to top the list of candidates likely Republican primary voters say they would never support, 35% say so, including 47% of those moderate or liberal voters. Bush follows, with 12% saying they would never vote for the former Florida governor, including 19% of those on the conservative side.

After Jeb Bush, the CNN poll shows Carly Fiorina at 4%, followed by Rand Paul and Ben Carson tied at 3%, and no other candidate above 1%. Trump has a larger lead of 25 points in the new poll from Franklin Pierce University and the Boston Herald, which gives him 38% compared to 13% for Ted Cruz, 10% for both Jeb Bush and Marco Rubio, 8% for John Kasich, Carly Fiorina, Chris Christie and Rand Paul knotted up at 5% each, Ben Carson at 3% each, and no other candidate above 1%. Trump’s lead in three others polls released by Suffolk University, Emerson, and ARG stands at 15 points, 17 points, and 14 points respectively, with the remaining candidates roughly in the same position as the other polls. All of this gives Trump a 20.2 point lead in the RealClearPolitics poll average that is largely consistent with where he’s been in the Granite State for at least the past five months now, and the Pollster average shows similar numbers.

What this suggests on the Republican side is that, at least for the moment, New Hampshire seems as though its a lock for Donald Trump. Obviously, past history has shown us that this can change very quickly, especially depending on what happens in Iowa tonight. If Trump ends up underperforming, which at this point would mean coming in third behind both Ted Cruz and Marco Rubio, it would be a significant blow to his claims of being a “winner” that have propelled his race forward from the beginning and also call into doubt other polling showing him in the lead. Similarly, a loss in Iowa by Ted Cruz is likely to blunt his progress going forward as Republicans look for the candidate who can be a viable alternative to to Trump. Additionally, a stronger than expected showing by a particular candidate, such as Marco Rubio, could raise their prospects in the Granite State. As things stand right now, though, a second or first place showing in Iowa should allow Trump to maintain his lead in New Hampshire, meaning that the focus there will shift to who might emerge as the “establishment” alternative to him and Cruz going forward. In that regard, Republicans still find themselves in a situation where there is no such clear candidate. Ohio Governor John Kasich is still in second place in the RealClearPolitics average, but his poll numbers have been all over the place lately so it’s unclear just how strong he really is. Meanwhile, there is less than a point separating Bush and Rubio and roughly four points separating Bush, Rubio, and Christie. Unless one of these candidates emerges as a clear favorite, it’s unclear if any of these “establishment” candidates will be able to mount an effective challenge as the race heads to states such as South Carolina, where Trump and Cruz are dominant.

Over on the Democratic side, the race in New Hampshire continues to be all about Bernie Sanders:

In the Democratic race, Sanders continues to lead Hillary Clinton by a wide margin, 57% to 34% in the new poll. Those likely to vote in the Democratic primary are more apt than those on the GOP side to say they have made up their minds about whom to support (58% of likely Democratic voters say their choice is locked in vs. 39% of Republican likely voters).

Sanders holds an edge across nearly all demographic groups measured in the poll, though Clinton fares better among women than men, and she splits voters age 65 or older with Sanders about evenly, while trailing Sanders by a significant margin among younger voters.

And although a December CNN/WMUR poll found expectations then tilted Clinton’s way, Sanders’ streak of strong poll results appears to have changed that, with 54% of likely Democratic voters now saying they think Sanders will win the state’s primary on Feb. 9, and just 31% now predicting a Clinton win.

The twenty-three point advantage that Sanders has in the CNN poll is mirrored in the Franklin Pierce/Boston Herald poll I linked to above, although it is significantly larger than the lead he has in polls released by Emerson and ARG, which give the Vermont Senator a lead of eight and seven percent respectively, although these polls may be outliers given the fact that they are inconsistent with pretty much every poll released over the past month. All of this gives Sanders a seemingly insurmountable lead of 15.4 points in the RealClearPolitics average for New Hampshire that leads one to wonder if there’s anything that Hillary Clinton can do to turn these numbers around even if she manages to win Iowa. Eight years ago, of course, Clinton was able to use New Hampshire to revive her campaign after a disappointing third place finish in Iowa, but it’s worth noting that the situation in New Hampshire was significantly different back then. Prior to the weeks immediately before Iowa, Clinton had a fairly strong lead over then-Senator Obama in the Granite State, and it was only in the final weeks that Obama closed the gap and took a small single digit lead over Clinton. Thanks to a strong organization and solid campaigning, Clinton was able to reverse her fortunes and effectively save her campaign. (Source) This time, even if Clinton wins Iowa she has a far bigger gap to overcome. Is it possible for Clinton to win New Hampshire? I suppose, but it would seem to require a strong finish in Iowa that tends to suggest that Sanders’ support is less substantial than it appears, along with a collapse in his support in New Hampshire. Quite honestly, that seems unlikely.

So, as things stand right now, it would appear that Donald Trump and Bernie Sanders are the most likely winners of the Republican and Democratic Primaries. Obviously, that could change significantly over the next week, but it would take political earthquakes in both parties for that to happen. Anyone who says that they saw that coming a year ago is blowing smoke.