Some people are saying that David Petraeus deserves promotion to a rank last held by Omar Bradley. 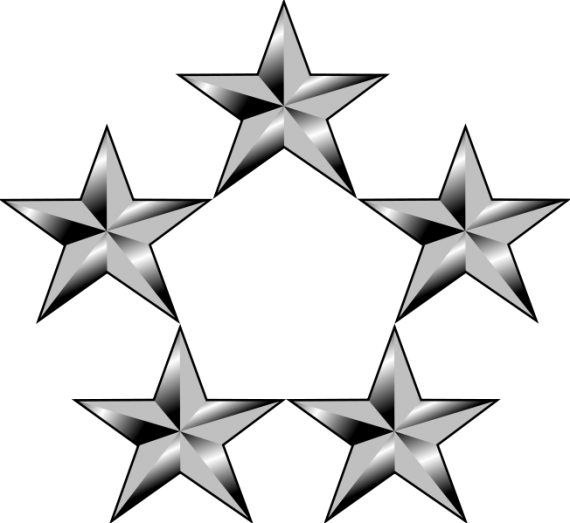 Over at The Atlantic, D.B. Grady, a former paratrooper and veteran of the Afghan War, argues that David Petraeus deserves a promotion:

It’s difficult to find a war in American history where so much depended on any one man. He is the face of this war, the spiritual commander in chief amongst presidencies deficient in military authority. He is the only man, general or civilian, who can stand before the American people, the American soldier, and military families, and discuss the conflict without being second-guessed or dismissed out of hand as a partisan hack. Long gone are the days of “General Betray Us.” Indeed, even MoveOn.org has scrubbed its website of the controversial advertisement. Petraeus is the Army. He is the war. The fate of the region is in his hands.

For that reason, and because President Obama has recommitted this nation to war in Afghanistan and the continued campaign in Iraq, General Petraeus should be promoted to General of the Army, and given a fifth star.

He would be the first man to hold that rank since the revered Omar Bradley in 1950. It would require authorization by the president and confirmation by the Senate. In practice it wouldn’t change the job of General Petraeus. But it would not only show that President Obama believes in Petraeus — that he’s not simply throwing America’s best general into the arena for political expediency — but would also reassure soldiers and civilians alike that this White House expects this man to win. This man’s plan to work.

War is hell. It’s hard for soldiers in the field, and it’s harder for families left behind. Soldiers humping 90-pound rucksacks in the most unforgiving terrain the world over, and asked to build a civilization in a place where it never existed, need to know that the president of the United States isn’t waging a war he “inherited.” That this isn’t a burden he’d rather do without. That it isn’t a distraction from domestic policy. They need a commitment.

General Petraeus embodies that commitment. And as General of the Army, he will be given an unambiguous mandate with the unfettered support of the president and the nation.

First of all, Woods is totally off the mark in his hypothesis that Petraeus is the indispensable man in Afghanistan. He has a certain degree of credibility based upon the apparent successes of his strategy in Iraq, yes, but the idea that only he is capable of leading America’s troops in Afghanistan is both absurd and an insult to every other General Officer in the United States Army, not the least being Stanley McChrystal whose dismissal had nothing to do with his competence as a military leader.

Moreover, as James noted last month, there is a certain danger in the Man On Horseback model that Woods so clearly believes in. Putting your faith in men is unwise as a general proposition. Putting your faith in a single man is even more foolhardy because, as I noted when Petraeus took over in Afghanistan, there’s no guarantee that he’ll be able to do in Kabul what he did in Baghdad.

But what of this proposal to give Petraeus a fifth star ?

Woods seems to believe doing so would be a sign of “commitment” to the war effort, but considering that we’ve sent tens of thousands of men and spent billions of dollars on the Afghan War, I don’t think there’s much doubt about the nation’s commitment and it’s hard to see how a promotion would add to that effort.

There hasn’t been a 5 star General since Omar Bradley retired in 1953, though, and while there was some talk of awarding the rank to Colin Powell when he served as Chairman of the Joint Chiefs of Staff, the rank has not been used since then although it technically still exists, as does the “six star” rank of General Of  The Armies, which was last held by John J. Pershing.

So, does David Petraeus deserve a fifth star ? Based on his military accomplishments, perhaps. However, if the sole reason for doing so is as a gesture of commitment  to the war effort as Woods suggests I would say the answer is no.

UPDATE (James Joyner): In addition to the points Doug makes above, while the proposal is interesting in theory, doing this would have some bizarre spin-off effects.

When we created the 5-star rank during WWII, we did so because the Brits had the Field Marshall rank, which was technically ahead of our four-star general/admiral rank.  So, we had a Supreme Allied Commander ranked by theoretical subordinates.

But, to make Petraeus a 5-star, we’d have to, at a minimum, do so for the new CENTCOM chief, who’s his boss.  And, while they’re not technically in the chain of command any more, it would be awkward to have the Army Chief of Staff and Chairman of the Joint Chiefs of Staff ranked by a battlefield commander.  Once those guys are promoted, it would be quite reasonable to wonder why the other Service Chiefs, Combatant Commanders, and Vice CJCS are outranked by peers and subordinates.   So, you’d have to promote a dozen or so people to 5-star rank to maintain protocol.

One could, I suppose, wait until after Petraeus is done in Afghanistan and give him the 5th star and the Chairman gig as a sendoff.   But I’m not sure what the point would be.