Florida has again scheduled its primary ahead of the deadlines set by the Republican and Democratic parties. 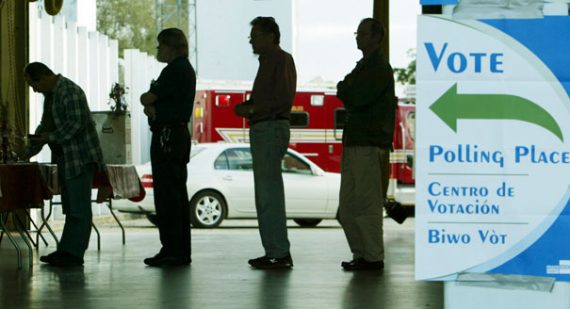 In 2008, Florida violated the agreements they had entered into with the Democratic Party and ran their primaries ahead of the authorized schedule, suffering penalties for so doing. The Sunshine State is doubling down in 2012.

A deepening standoff between national Republicans and top party leaders in Florida has the potential to blow up the 2012 presidential primary calendar — and do lasting damage to the GOP in the nation’s largest swing state.

At issue is the early date of Florida’s presidential primary election, currently set for Jan. 31, 2012. As of right now, it’s the first primary scheduled. That’s in blatant violation of Republican and Democratic National Committee rules, which say only four states — Iowa, New Hampshire, South Carolina and Nevada – can hold primary elections before the beginning of March.

But despite the pleas of GOP officials in Washington, the Republican leaders of Florida’s legislature say they have no intention of shifting the date in a way that could diminish the Sunshine State’s influence in 2012. Key officials signaled they would accept nothing less than going fifth on the primary calendar — not leapfrogging the four early states, but clearly marked off from the other 45.

“Florida’s the most important presidential state and we’d like to keep our current position as one of the early states,” said state Senate President Mike Haridopolos, who called Florida “the first so-called ‘megastate’ in the presidential race.” “We liked our position last time, following South Carolina,” he explained.

The quadrennial ritual of presidential primary calendar jockeying has become a familiar practice as states attempt to increase their influence over the nominating process — almost invariably in vain. But Florida is negotiating from an unusually strong position.

Thanks to the last round of census data, Florida is now by far the country’s largest swing state, with 29 electoral votes. The closest runners-up are Pennsylvania, with 20, and Ohio, with 18. That alone could make it dangerous for Republicans to penalize Florida for holding an out-of-order primary.

What’s more, national Republicans are holding their 2012 convention in Tampa, so any penalty on Florida’s convention delegation would be particularly embarrassing.

Florida House Speaker Dean Cannon said the risk of being penalized at the 2012 convention was “outweighed in my mind by the advantage of having Florida earlier in the cycle.”

The entire process is absurd. It’s laughable that tiny, unrepresentative states like Iowa and New Hampshire should have such outsized power simply out of deference to tradition. And South Carolina and Nevada have even less of a claim on a privileged spot at the head of the line.

Florida’s refusal to go along with the game not only puts the parties in an awkward position but invites other states to do the same, creating a race to the front.

My own preference would be to hold a national primary in, say, March followed by a run-off in, say, May or June for races in which no candidate got a majority. That’s expensive and advantages those with strong early name recognition but I’m not sure that’s such a bad thing. Alternatively, we could have a series of “Super Tuesday” style contests — perhaps five of them, with either equal numbers of states or equal populations — and rotate the order every four years. Either would be preferable to the current farce.