Thomas Friedman continues his quixotic quest for a third party. His candidate: a fantasy Barack Obama. 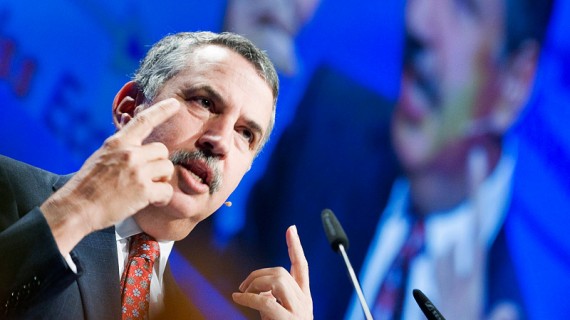 Thomas Friedman continues his quixotic quest for a third party.

Watching this campaign unfold reaffirms how much it would have benefitted from a serious, centrist third-party challenger. It would have been so clarifying to have an independent voice calling out Mitt Romney for running a campaign that consists of decrying the last three and a half years of the Obama presidency, while offering to reinstate the very same failed policies that made the eight years of George W. Bush a disaster that President Obama has spent most of his time cleaning up. And it would have been equally clarifying to have an independent challenger calling out Obama for failing to put a credible, specific economic plan on the table — at the scale of our problem — but relying instead on a campaign that amounts to a series of discrete appeals to each of the Democratic Party constituencies.

He’s got a good point here. Without a third-party challenger, who could possibly attack Obama’s failed policies or Romney’s lackluster counter proposals? I mean, aside from Romney and Obama and their surrogates in two existing parties?

But there will be no third-party candidate, so the only hope is getting Obama to raise his game.

The only hope for whom? I mean, he’s already been president three-and-a-half years. Might I suggest that this is his game? So, if you don’t like it, wouldn’t it make more sense to wish Romney would raise his game? Anyways,

To do that, the president needs to recognize just how badly he wasted Warren Buffett — using him for a two-week, wedge-issue sugar high.

Obama got Buffett to endorse the “Buffett Rule” — a minimum tax rate of 30 percent for any individual who makes more than $1 million a year so that all millionaires have to pay a higher tax rate than their secretaries. The plan had no chance of passing, would have made only a small dent in the deficit and was rightly decried by experts as a gimmick that only diverted attention from what we really need: comprehensive tax reform that can substantially raise revenue in a fairer manner. The Buffett Rule has largely faded away.

Buffett is a businessman out to make a profit. But he is respected by many as a straight-talking nonpartisan — someone who can “call the game.”

You know who thinks Warren Buffet is a “straight-talking nonpartisan”? Thomas Friedman, that’s who.  I like and respect Buffett but he’s a Democrat. He makes no bones about that. Indeed, he’s a Democrat who, unencumbered by a need to please voters, expresses views well to the left of most Democratic politicians. Which is just fine an dandy, of course, but it hardly makes him a “straight-talking nonpartisan.”

What the president should have done is follow the advice of the Princeton University economist and former Fed Vice Chairman Alan Blinder, namely lay out a specific “three-step rehab program for our nation’s fiscal policy.” Call it the Obama Plan; it should combine a near-term stimulus on job-creating infrastructure, a phase-in, as the economy improves, of “something that resembles the 10-year Simpson-Bowles deficit-reduction plan — which would pay for the stimulus 15-20 times over” and a specific plan to “bend the health care cost-curve downward.” Obama has already offered the first; he still has not risen to the second and the third would be an easy extension of his own health care plan.

Well, since Obama didn’t create or endorse it, perhaps we should call it the Blinder Plan. Obama commissioned Simpson-Bowles and promptly rejected it, apparently deciding that his embrace would kill it. And, I don’t want to call Thomas Friedman a moron or anything, but was he watching the health care debate? There was no “easy extension” to be had.

Obama needs a second look from independents who could determine this election. To attract that second look will require a credible, detailed recovery plan that gets voters to react in three ways: 1) “Now that sounds like it will address the problem, and both parties are going to feel the pain.” 2) “That plan seems fair: the rich pay more, but everyone pays something.” 3) “Wow, Obama did something hard and risky. He got out ahead of Congress and Romney. That’s leadership. I’m giving him a second look.”

Uh huh. Again, the main has held the job that Friedman wishes him re-elected to for almost four years. If “hard and risky” were his style, he’d have done it. Instead, he’s deferred to Congress and tried to build consensus at the final hour. It might work for a community organizer and, hell, it might work for a president in a different atmosphere. But let’s not expect Obama’s entire personality to change between now and November.

I’d bet anything that if the president staked out such an Obama Plan, Buffett and a lot of other business leaders would endorse it. It would give the G.O.P. a real problem. After all, what would help Obama more right now: Repeating over and over the Buffett Rule gimmick or campaigning from now to Election Day by starting every stump speech saying: “Folks, I have an economic plan for America’s future that Warren Buffett and other serious business leaders endorse — and Mitt Romney doesn’t.”

That’s a good point. Most Americans, after all, are looking to billionaires for their political queues. In fact, nobody’s more popular right now than wealthy investors. Oddly, however, this approach hasn’t worked for Mitt Romney, who seems to be the candidate favored by serious business leaders.

Obama loyalists often say: “Those Republicans are so bad. They’ve tried to block us at every turn.” Yes, the G.O.P. has tried to stymie Obama; it’s been highly destructive. But the people who keep pointing that out don’t have an answer for the simplest next question: Why have they gotten away with it?

My view: It’s because too many Americans in the center-left/center-right do not feel in their guts that Obama is leading — is offering an economic plan at the scale of the problem that has a chance for bipartisan support and that makes them want to get up out of their chairs and do battle. Our situation is different from four years ago; people want to know the president has a plan for getting out of this mess.

But there’s a small problem: he doesn’t. He’s had most of a presidential term to formulate and announce one and, well, he hasn’t.

When the Grand Bargain talks with John Boehner fell apart, Obama retreated to his base when he should have rallied the center by laying out — in detail — the Grand Bargain the country needs. That would have forced Romney to speak in detail about his plan — the Paul Ryan plan — and reveal it for what it is: a radical plan that few Americans would embrace if they understood it.

Then people would see a real choice: a tough-minded-but-centrist plan with real bipartisan support versus a radical plan to gut Medicare, give more tax cuts to the already wealthy and drastically shrink discretionary spending so eventually nothing is left for education, veterans, roads, research, the F.B.I. or the poor.

But, instead, they have a choice between the president they have now and something else.

And the morning after that happens — when Warren Buffett endorses the Obama Plan, not just the Buffett Gimmick — the president will have his mojo back.

Oddly, however, Buffett endorsed the Buffett Gimmick and very little mojo seemed to come with it.