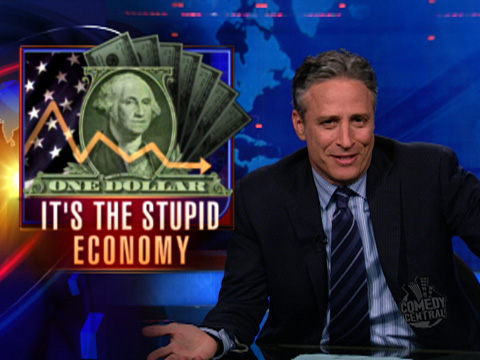 “Jon Stewart is influential in America, so we took the opportunity for the two to meet and to discuss the economy,” Treasury spokesman Steve Adamske said in an e-mail yesterday. Stewart’s program has poked fun at Geithner, including a segment last year about the Treasury secretary’s trouble selling his New York home.

On the same day he met with Stewart, Geithner spoke on the phone with Democratic lawmakers including Senate Banking Committee Chairman Christopher Dodd of Connecticut, Senate Majority Leader Harry Reid of Nevada and House Speaker Nancy Pelosi of California, according to the appointments calendar.

The Geithner-Stewart summit-of-sorts was held on a day of some good news for the administration: Labor Department figures for March showed employment figures had improved the most in three years.

FDL’s Teddy Partridge wonders, “What could possibly be the point of this?” He then answers his own question: “Jon Stewart is smart. He’s influential with Obama’s base.”

But he’s not sure he accepts that answer. He points to Reuters’ Christian Plumb, who notes that Stewart (birth name Jonathan Stuart Leibowitz) happens to be the brother of NYSE CEO Larry Leibowitz.  Partridge muses, “Had Geithner found himself a back-channel to the COO of the New York Stock Exchange that wouldn’t require disclosure by either party?”  Because, of course, the Treasury Secretary never talks to movers and shakers in the financial sector.

Raw Story‘s Daniel Tencer goes with the more obvious answer: “If the Rally to Restore Sanity and/or Fear didn’t convince you that Comedy Central’s Jon Stewart has made the leap from comedian to political force, perhaps this will.”

Business Insider‘s Joe Weisenthal agrees:   “This basically ends any debate about whether Stewart is a comedian or a newsman. Presumably Geithner thought it important that Stewart be well-informed on aspects of policy, and Stewart felt the same way.”    He adds, “The more paranoid would note that Stewart has skewered big banks and bailouts, and that Geithner may have wanted the comedian to see the other side of the programs Geithner architected.”

That’s not paranoia; it’s common sense. One imagines that Geithner, quite reasonably, thinks Stewart is sympathetic to the Obama administration. It makes sense, then, for him to spend some time trying to explain himself to a very influential media figure with a Progressive audience who’s skewering the administration’s economic policies four times a week.

Indeed, administration officials constantly meet with people far less influential than Stewart.   Like bloggers, for instance.  Getting the message out to people likely to give you a fair hearing and spread the word is an important part of any leader’s job, whether it be politics or business.

Doug Powers gets off the best line on the matter:  “On many an occasion I’ve surmised that there simply must be a comedian behind some of the financial decisions the Obama administration has made, but I honestly didn’t believe that to be the case literally.”  Alas, he spoils it by closing on a non sequitur:  “Word of warning to Jon Stewart: There’s no better way to invite an IRS audit than by spending 90 minutes ‘off the record’ with Tim Geithner less than two weeks before tax returns are due.”  Because, you know, Treasury Department employees instinctively go after people who meet with their boss.