We won't have Hillary Clinton to kick around anymore. 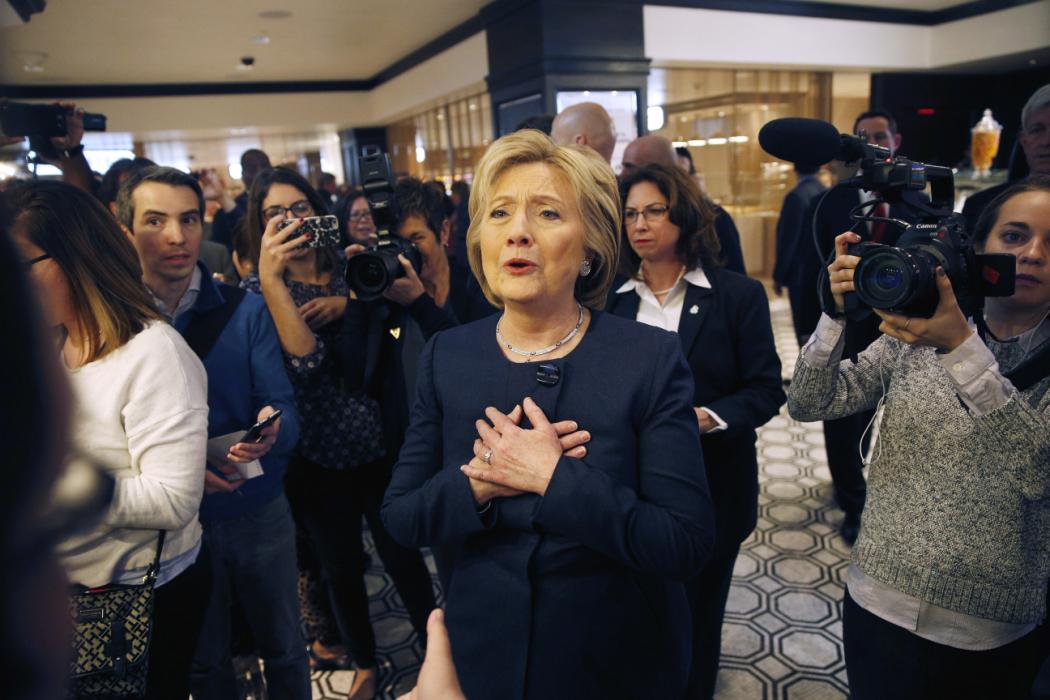 Hillary Clinton made clear yesterday that she would not be running for President in 2020:

Hillary Clinton, the former secretary of state and first lady who lost the White House to Donald J. Trump in 2016, said officially on Monday what has been unofficially clear for months: She is not running for president again in 2020.

“I’m not running,” Mrs. Clinton told a New York City television station, News 12. “But I’m going to keep on working and speaking and standing up for what I believe.”

Mrs. Clinton, the first woman to win a major-party nomination for president, remains a complicated figure for the Democratic Party as both a trailblazing female leader and also the candidate who was defeated by Mr. Trump.

Ahead of the 2020 election, she has been holding private meetings with many of the current and potential presidential candidates, including Senator Kamala Harris and former Vice President Joseph R. Biden Jr., as they sought counsel from her even before she formally ruled out another run.

“I’m not running,” the 2016 Democratic nominee told News 12 Westchester. But Clinton added that she would continue “working and speaking and standing up for what I believe.”

“I want to be sure that people understand I’m going to keep speaking out,” the former secretary of State told the local news network. “I’m not going anywhere. What’s at stake in our country, the kinds of things that are happening right now, are deeply troubling to me.”

“We’ve gotten not just polarized,” she continued. “We’ve gotten into, really, opposing camps unlike anything I’ve ever seen in my adult life.”

Clinton said she plans to take an active role in the next election cycle, which already features a crowded field of Democratic candidates. Sens. Kamala Harris (D-Calif.), Elizabeth Warren (D-Mass.), Amy Klobuchar (D-Minn.), Cory Booker (D-N.J.) and Bernie Sanders (I-Vt.) are just a handful of the prominent leaders who have announced their candidacy.

Clinton has met with a range of candidates and individuals considering a presidential run. CNN reported that the former secretary of State met with Klobuchar and former Vice President Joe Biden in February.

Biden is still considering whether he will launch a 2020 campaign. Clinton told News 12 Westchester that she’s told every candidate she’s met with so far to not take “anything for granted.”

“People need to understand that, in many cases, they were sold a bill of goods,” she said. “We can’t take anything for granted. We have to work really, really hard to make our case to the American people, and I’m going to do everything I can to help the Democrats win back the White House.”

Ordinarily, I wouldn’t write about candidates who decline to enter the race, for example, I didn’t think that yesterday’s announcement by former Attorney General Eric Holder had decided not to run, or today’s announcement by Oregon Senator Jeff Merkley that he would stand for re-election to the Senate rather than run for the Democratic Presidential nomination deserved posts of their own . Clinton, however, is a separate case. In addition to having been the first female nominee for President of a major political party in American history1 Additionally, of course, Clinton also served for nearly eight years as the junior Senator from New York, and was perhaps the most politically active First Lady since Elenor Roosevelt, playing a major role in her husband’s effort to reform the health care system in the United States. As such, news about her is far more significant than any other potential but declined candidates for the 2020 field. To be honest, not running is the best decision she could make for herself and her party.

To be fair, Clinton was never considered to be a likely 2020 candidate notwithstanding the fact that she has seemingly not disappeared from the public scene in the manner that previous unsuccessful candidates for President. Candidates in her position who have run for President twice only to fall short as she did in both 2008 and 2016 have rarely made a third run for the office. Perhaps the most famous exception to that rule was William Jennings Bryan, who was the Democratic Party nominee in 1896, 1900, and 1908.  Another exception to that rule is Ronald Reagan, who was a candidate for the Republican Presidential nomination in both 1968 and 1976 before winning the nomination, and the Presidency, in the Election of 1980 Assuming he gets into the 2020 race, former Vice-President Joe Biden would be another exception to the rule. For the most part, though, and leaving out exceptions such as perennial candidates such as the late Harold Stassen, major party candidates have only run for the office twice.

In addition to this, there has not been any real indication that there has been much of a desire inside the Democratic Party for Clinton to run again notwithstanding the fact that she won the popular vote in 2016. To some extent, this is due to the fact that, in many respects, the party has moved beyond the center-left ideology that Clinton represented in both of her bids for office. Instead, the party is, for better or worse, becoming more and more under the spell of the progressive wing of the party, and there are many parts of this wing of the party that resents Clinton for her alleged role in suppressing the campaign of Vermont Senator Bernie Sanders three years ago.  Additionally, there seems to be a definite desire in the party for younger voices to have their chance, and there are already two septuagenarians in the race, and two more considering their bids in the persons of Joe Biden and Michael Bloomberg. Finally, it has become apparent in the years that have followed that the 2016 campaign was physically and emotionally grueling for Clinton, and she was likely not really interested in going through that ordeal again.

Update: James Joyner is a bit more skeptical about just how emphatic Clinton’s declaration is than I am.