With the race for the Democratic nomination over, President Obama is ready to hit the campaign trail for Hillary Clinton. 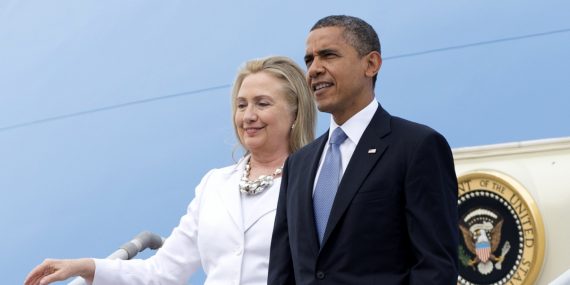 With the race for the Democratic nomination having coming to an effective end Tuesday night with Hillary Clinton’s victories in New Jersey, California, and elsewhere and her having secured enough delegates to win the nomination on the first ballot, President Obama followed the example of most of his recent predecessors and formally endorsed Hillary Clinton for President:

WASHINGTON — President Obama on Thursday formally endorsed Hillary Clinton and called her the most qualified candidate to seek the White House, imploring Democrats to come together to elect her after a bruising party primary.

In a video posted on Mrs. Clinton’s Facebook page, Mr. Obama said, “I don’t think there’s ever been someone so qualified to hold this office.”

Mr. Obama is impatient to begin playing an active role in the race to succeed him, and his administration has been in talks with Mrs. Clinton’s team in recent days about how and where he could be most helpful to her.

But the president has been circumspect about declaring the race finished — even after Mrs. Clinton captured sufficient delegates in primaries on Tuesday to clinch the Democratic nomination — making a public show of respect for Senator Bernie Sanders and his highly motivated coalition of progressive supporters.

On Thursday, Mr. Obama congratulated Mrs. Clinton on “making history” in becoming the presumptive nominee, and said he had personally witnessed her qualifications for the Oval Office. “I have seen her judgment, I’ve seen her toughness, I’ve seen her commitment to our values up close,” the president said.

Mr. Obama also praised Mr. Sanders — who left the White House about 90 minutes before the video was posted — for what he called an “incredible campaign.” He said the Vermont senator’s emphasis on addressing income inequality, reducing the influence of money in politics, and bringing young people into the political process would strengthen the party.

“Embracing that message is going to help us win in November,” Mr. Obama said.

He said he knew how hard being president can be.

“That’s why I know Hillary will be so good at it,” he said. “In fact, I don’t think there’s ever been anyone so qualified to hold this office. She’s got the courage, the compassion, and the heart to get the job done.

“I’m with her, I am fired up, and I cannot wait to get out there to campaign for Hillary.”

President Obama endorses Hillary: “I don’t think there’s ever been someone so qualified to hold this office.” https://t.co/KetvKoa853

Obama just endorsed Crooked Hillary. He wants four more years of Obama—but nobody else does!

And here’s the video:

The announcement also came about two hours after a White House meeting between Obama and Vermont Senator Bernie Sanders, who said that his campaign would continue at least through next Tuesday’s final Democratic primary in the District of Columbia:

WASHINGTON — Senator Bernie Sanders met with President Obama on Thursday and said afterward that he would do everything within his power to stop Donald J. Trump from becoming president — and would work closely with Hillary Clinton to make that happen.

After the meeting with Mr. Obama, which lasted more than an hour, Mr. Sanders gave no indication that he was ready to leave the race just yet, insisting that he would compete in next week’s primary contest here in Washington. However, he made clear that party unity was on his mind.

“I will work as hard as I can, to make sure that Donald Trump does not become president of the United States,” Mr. Sanders told reporters, saying the billionaire businessman “makes bigotry and discrimination the cornerstone of his campaign” and would be a “disaster” as commander in chief.

He said he would continue fighting for the issues that animated his campaign, including enhancing Social Security benefits, college affordability and restoring the nation’s crumbling infrastructure.

“These are the issues that we will take to the Democratic National Convention in Philadelphia in July,” Mr. Sanders said, declining to answer reporters’ shouted questions about whether he would leave the race.

Shortly after their meeting, Mr. Obama endorsed Mrs. Clinton in a video. He also praised the campaign that Mr. Sander ran.

The visit came a day after the senator huddled with his team at his headquarters in Vermont to discuss the fate of his candidacy.

Mr. Sanders, who requested the meeting with the president, pulled into the White House grounds at 10:56 a.m. after stopping at a nearby Peet’s Coffee for a scone. Mr. Obama and Mr. Sanders strolled down the colonnade next to the Rose Garden on their way into the Oval Office, chatting inaudibly and grinning broadly. Nearby, a thick line of cameras and cluster of microphones were assembled in the driveway outside the West Wing, where journalists peppered the Vermont senator with questions.

Mr. Obama was trying to negotiate, however gently, with him to exit the Democratic race without inflicting damage on efforts to unite the party.

“My hope is, is that over the next couple of weeks, we’re able to pull things together,” Mr. Obama said during a taping of an appearance on the “Tonight Show Starring Jimmy Fallon” on Wednesday in New York. “There’s a natural process of everybody recognizing that this is not about any individual.”

One expects that Sanders will formally endorse Clinton at some point after the D.C. primary next Tuesday notwithstanding all the rhetoric we’ve heard over recent weeks regarding taking the fight to the convention floor and attempting the wrest the nomination away from Clinton by somehow convincing Superdelegates to back the candidate who clearly came in second place by every conceivable measure. Indeed, it’s been reported already today that there have been initial contacts between the Sanders and Clinton campaigns regarding the timing and logistics of a formal endorsement and I would expect that we’ll see something within the next week or so to that regard. Eight years ago, of course, Clinton herself took about three days after the end of the campaign to endorse Obama and then joined Obama at a rally in the appropriately for the theme of the rally named town of Unity, New Hampshire. Whether we’ll see something similar for the eventual Sanders endorsement is unclear, but one assumes that the Clinton campaign will want to do something high profile to get the message across to Sanders supporters and begin to heal the rifts that had developed during the course of what turned out to be a more competitive campaign than anyone expected when it started. There will be many issues for the two campaigns to sort out, of course, including not only Sanders’ role in the upcoming General Election but also his role at the convention in the drafting of the party platform and potential changes to the rules governing Presidential elections, many of which Sanders has openly complained about for weeks now. Additionally, Sanders endorsing Clinton is no guarantee that his supporters will come along, at least initially, and the Clinton campaign will want some committment from Sanders that he will do his best to get those supporters to rally around the party nominee. While this may prove difficult at first, Sanders has said that he intends to join Clinton in making sure Donald Trump is not elected President, and that at least could be something that gives Sanders supports an incentive to rally around Clinton as we head into the fall.

As for President Obama, his decision to wait until after the conclusion of the campaign for a formal endorsement is not unusual. President Reagan didn’t endorse his Vice-President until May 1988, after Bush’s main opponents had dropped out and his nomination was secure. President George W. Bush similarly waited until the Republican nomination process was essentially over to endorse John McCain. Bill Clinton, on the other hand, endorsed his Vice President, Al Gore, very early in December 1999, although it’s fair to say that at that point Gore’s only opponent, former Senator Bill Bradley, was little more than token opposition. Regardless of the timing, though, it does appear that we can expect Obama to be far more actively involved in the 2016 campaign than Presidents Reagan, Clinton, or Bush 43 were involved in the campaigns of their intended successors. Indeed, various reports have described Obama as “very eager” to take to the campaign trail and to take on Donald Trump on behalf of Clinton. Given the President’s popularity among the public as a whole, and specifically among Democrats, it’s likely that he’ll be used as much as as reasonably possible as we head into the fall, especially in areas with high African-American populations, in an effort to whip up Democratic enthusiasm for the fall and to get people to the polls once early voting starts in many states in October and as we head into November. Used in combination with other Democrats likely to endorse Clinton in the coming weeks, such as Vice-President Biden and Massachusetts Senator Elizabeth Warren, this could be a very effective tool for the Clinton campaign in a battle against a very unconventional opponent. Donald Trump, on the other hand, doesn’t really have any similar tools at his disposal, and the continued infighting in the GOP could make it difficult to put such a coalition together. Because of this, the advantage in this race clearly continues to rest with Hillary Clinton.

Update: Not surprisingly, President Obama’s endorsement was followed hours later by an endorsement from Vice-President Biden:

Biden, speaking Thursday night at the American Constitution Society convention a few blocks from the White House, didn’t squarely endorse Clinton. But he made his preferences clear in what seemed like an unplanned aside amid remarks about the need to confirm fill the Supreme Court vacancy left by the death of Justice Antonin Scalia. Republicans have refused to grant a hearing to Obama’s nominee, federal judge Merrick Garland, let alone a floor vote.

“Keep in mind, we have another entire term of this potential confusion if the vote is not allowed this year. Anybody who thinks that whatever the next president — and God willing, in my view, it’ll be Secretary Clinton,” Biden said. “Now, I don’t say that for political reasons, but whoever it is, even if it is a Democrat, the idea this will be brought up within a month or two or three is highly unlikely.”

As with the President, the Vice-President is likely to be an effective campaign surrogate, especially among the largely white, working class voters that have been attracted to Donald Trump over the course of the past year. 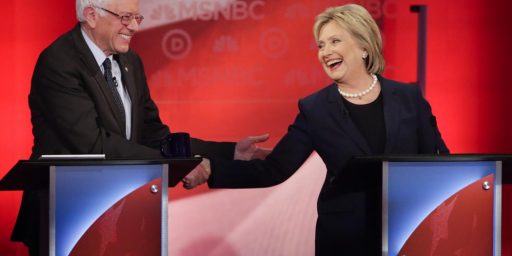