Harry and Mitch to the rescue? 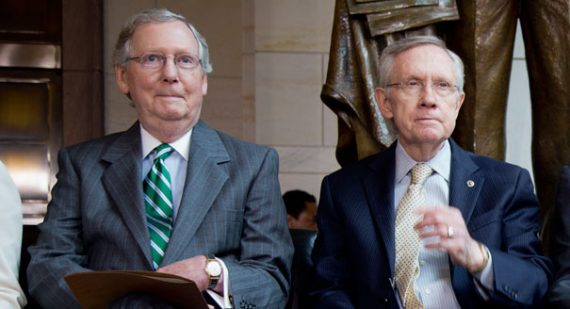 As I noted this morning, with the House of Representatives out of town for the weekend and negotiations for a Continuing Resolution/Debt Ceiling deal with the White House apparently stalemated, all eyes have turned to the Senate. Unfortunately, things don’t seem to be going much better over there:

After Senate Democratic leaders rejected a proposal Saturday by Sen. Susan Collins (R-Maine) to end the budget impasse, the burden to find a solution now falls squarely on Majority Leader Harry Reid and Minority Leader Mitch McConnell — two shrewd tacticians who have a long, complicated and contentious personal and political history with each other.

Republican senators, eager for a way out of a shutdown fight that has roiled their party’s brand, reacted to the leadership discussions positively, believing that the two crafty dealmakers could concoct a proposal to reopen the government and avert the nation’s first-ever default as soon as next week.

Reid, however, was notably more dour.

When asked if he is confident he could reach a deal with McConnell, Reid told POLITICO: “No.”

“I’m just doing my best, I’m not confident in anything in the way Republicans have acted,” the Nevada Democrat said.

McConnell, along with his close ally Sen. Lamar Alexander (R-Tenn.), quietly met with Reid and Sen. Chuck Schumer (D-N.Y.) early Saturday to find a way out of the first possible default in U.S. history when the Treasury Department begins to run out of money Oct. 17. While senators said it was a positive discussion, how the impasse is resolved from here remains a major question going forward.

“Very pleasant” was how Reid described the meeting.

“They had a good talk this morning,” said Schumer, who has had about a dozen Senate Republicans reach out to him in recent days pushing for a deal.

“We had a good meeting,” McConnell added.

The failure of the long term debt ceiling bill to achieve cloture had been expected, so that’s not necessarily a set back. However, the out of hand rejection of the plan that Susan Collins had developed along with Joe Manchin and other Senators (including Kelly Ayotte and Lisa Murkowski) is particularly disheartening for anyone who was hoping for a quick and easy resolution of the crises gripping Washington. While it’s fate in the House was by no means certain, the plan contained enough of what both sides seemed to be saying they wanted out of this whole mess that it seemed as though it could have formed the basis for some kind of deal. It included a sop to the House conservatives in the form of a delay in the implementation of the Medical Device Tax, and it satisfied one of President Obama’s objections to the plan the House was floating yesterday by extending the debt ceiling out past the Christmas Season. Moreover, Collins, Manchin, Ayotte, and Murkowski are generally seen as moderates in both of their respective caucuses so it’s not as if this is a proposal out of left or right field that should have been unacceptable on its face. Thus, its somewhat unclear why this was rejected out of hand, especially given the fact that it is now blindingly obvious that the immediate crisis is going to require everyone to give on something, including the Democrat’s insistence that any Continuing Resolution or increase in the Debt Ceiling be “clean.”

So now, it appears that the next phase of this particular bit of kabuki theater is in the hands of the Senate Majority and Minority Leaders and their respective confidants. Given the fact that Reid and McConnell have proven singularly unable to come up with workable proposals during past crisis, this isn’t really a sign of hope. Nonetheless, it’s apparently what we’re left with at this point, and the terms they’re arguing over are roughly something like this:

McConnell, sources said, is eager to lock in lower-funding numbers at next year’s $967-billion level after the automatic sequestration cuts take effect. That number is too low for Democrats, but sources familiar with the talks said they were willing to agree to a stop-gap spending bill until mid-January at the $986 billion level before the new round of sequestration cuts take effect. It’s unclear whether McConnell would go for that.

Moreover, Democrats want a long-term increase in the $16.7 trillion national debt ceiling — potentially through next year — something Republicans blocked in a 53-45 vote in the Senate on Saturday afternoon. They want something far longer than what Collins proposed, which was through the end of January.

It’s far from clear whether Republicans will get anything out of Obamacare, even though GOP demands to gut the controversial law was the chief disagreement that spurred the first government shutdown in 17 years. Potentially, Republicans may get a two-year delay of the 2.3 percent medical device tax in the law, given the levy’s unpopularity even among Democrats. Moreover, in recent days, Republicans have been asking for a requirement for income verification of Obamacare subsidies as part of a deal.

The last time that we were at this point was during the Fiscal Cliff negotiations last year and Reid and McConnell were unable to reach a deal. What led to a resolution in that case was the last minute intervention of Vice-President Biden into the process and the deal he ended up striking with McConnell that managed to end that particular mess at largely the last minute. So far, Biden has not been a public face for the Administration in these crises and there have been some reports that he has been largely frozen out of the process by Obama aides who think he gave away too much the last time he got involved. At the same time, though, if Reid and McConnell fail to reach an agreement I wouldn’t be surprised to see Biden come in at the last minute like he did last time. The question now is whether a deal can be reached in time.