On January 3, 2008 Mike Huckabee celebrated a victory in the Iowa Caucuses, will be able to repeat that in 2012 ? 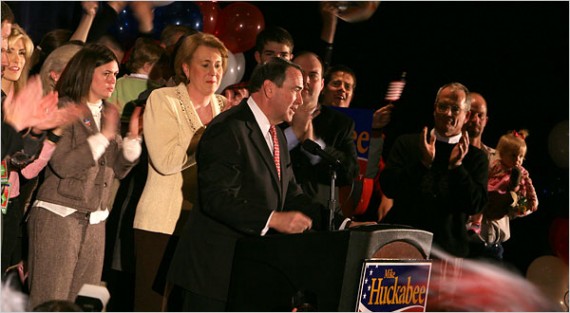 If the Iowa Caucuses were held today, a new poll says that Mike Huckabee would repeat his 2008 victory there:

Believe it or not, the race for the 2012 Republican presidential nomination is already underway in Iowa. Potential candidates like Tim Pawlenty, Rick Santorum, and Newt Gingrich are already making frequent visits to the state that hosts the First-In-The-Nation Caucuses.

While most people, including most Iowans, think that there is plenty of time before the 2012 presidential campaign will be in full swing, the clock is already counting down to caucus day 2012. What these candidates realize that most people don’t comprehend yet is that the first contest is the Iowa Straw Poll, which is now less than a year away.

The Iowa Straw Poll is an event sponsored by the Republican Party of Iowa and has historically winnowed the field the presidential candidates the summer before the actual nominating process begins. That means that one year from now, the presidential field will probably contract, just like it did in 2007, 1999, and 1996.

With all of that in mind, TheIowaRepublican.com polled 399 Iowa Republicans who consider themselves likely voters. We wanted to see what they think about the potential field of candidates as the 2012 presidential nomination gets underway.

Now, it’s obviously far too early to say that this means anything substantive, but it does seem to suggest that Huckabee still has a strong base of support in the Hawkeye State two years after his surprising come-from-behind win there in 2008. Whether he’ll be able to maintain that level of support in the face of onslaughts from Romney and whoever else decides to run is, of course, another question.

One observation, though, concerning Sarah Palin.

If she does decide to run, it would seem to me that a strong showing in Iowa is going to be essential for her. For a whole variety of reasons, not the least of them being Mitt Romney’s regional association with the state, it seems apparent that Palin would have a hard time pulling off a victory in New Hampshire and, unless she decides to skip Iowa and New Hampshire entirely and concentrate on South Carolina, she’ll have to pull off an early win in Iowa to show that she has a viable campaign.

Mike Huckabee, on the other hand, will be expected to repeat his 2008 victory in Iowa and anything less than first place is likely to be spun as a loss by the punditocracy. So, again assuming both of them run, expect the Republican caucuses to be a battle between Palin and Huckabee for the social conservative vote there. Which, ironically, may give Romney or someone else an opportunity to pull off an upset.