A Vanity Fair piece imagines what John Lennon's life would have been like had he survived an assassin's bullet. 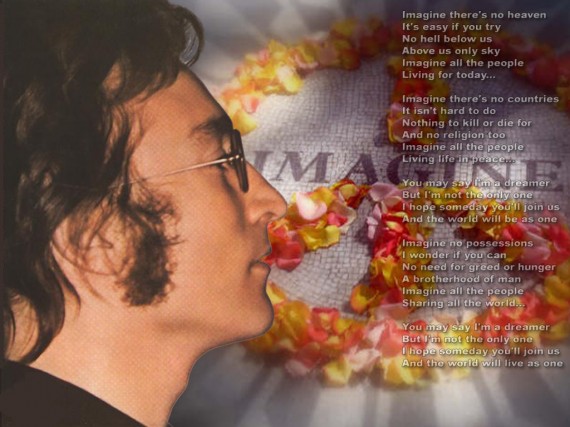 In a piece for Vanity Fair, David Kamp imagines what John Lennon’s life would be like if he hadn’t been murdered 30 years ago.  He would be a couple weeks shy of 70 now.

It’s a wonderful idea for a piece but, alas, disappointing.  Somehow, he conjures that, had Lennon survived Mark David Chapman’s bullet, the ex-Beatle who penned the musical version of the Communist Manifesto (“Imagine”) would have soon divorced Yoko and endorsed Ronald Reagan’s re-election.

Some parts ring true, such as this reaction to a 40th-anniversary release of John Lennon/Plastic Ono Band:

“Look,” he says, “every month is the anniversary of something that the record company can repackage and resell to you in re-digified-nanofied-retromastered form for a luxury fee. ‘Here’s the 47th-anniversary edition of the alternate take of “From Me to You” with John playing lead because George was off having a wee. Pre-order now on iTunes!’ It’s a con. But a brilliant one that keeps me in ruby-spangled codpieces and caviar hosiery.”

Twenty-seven years ago, you’d have been hard-pressed to envision a time when Ono would ever again speak to Lennon, much less share a stage with him. Their acrimonious 1983 divorce came amidst a ferocious midlife crisis that saw Lennon womanizing with abandon (most notoriously with Beverly D’Angelo, then still married to an Italian duke) and renouncing their lovey-dovey triptych of “heart play” albums—Double Fantasy, Milk and Honey, and Grow Old with Me—as “a diabetic coma.” Lennon further torpedoed his public image later that year when, upon taking his oath of U.S. citizenship, he announced that he would cast his vote in the ’84 presidential election for Ronald Reagan.

“I think we’re at a point where there’s too much government in everyone’s business and too many people looking for handouts,” he told NBC’s Lloyd Dobyns on the news program Monitor. “My father was a merchant seaman who walked out on the family. He couldn’t be bothered with me until I was a rich Beatle, and then he was suddenly coming ’round all the time, hat in hand. That’s where we’re at with America, you know—people knocking on Uncle Sam’s door, hands outstretched, [doleful voice] ‘Help me, man. Gimme, gimme.’ Ronnie, he understands that it’s time to bloody slam the door.“

One could see someone of Lennon’s background having this reaction.  But Lennon himself?   And, while I haven’t the slightest clue about Lennon’s fidelity or lack of same to his monkey, it’s just about inconceivable that their marriage would have fallen apart three years later had he lived.

An eventually that would, of course, have allowed for the possibility of this:

Lennon says he was still in this “fragile ego state” when he succumbed to the inevitable and agreed to play Live Aid with the other three Beatles, closing the Wembley show with a sloppy if ecstatically received “All You Need Is Love.”

“Queen mopped the floor with us, but even so, if we’d left it at that, it wouldn’t have been so terrible,” he says. It was the ignominy of 1987’s Everest, the first album of new Beatles material since Let It Be, that made him realize at last how astray his sense of judgment had gone.

I happen to have a CD of Everest in my work bag, which I take out when we settle into his barn recording studio to talk further. Lennon cringes at the sight of it: “Oh, God, the outfits! We look like we’re wearing bloody screen savers!”

Indeed, it’s hard to get past Everest’s cover image of John, Paul, George, and Ringo in white puffy shirts and purplish, hideously patterned brocade vests, all of the Beatles save McCartney wearing their hair in that acutely late-80s style: long, slicked back, and cinched tightly into ponytails that trail down their backs.

It’s quite possible, even likely, that a Beatles reunion would have been a huge disappointment.   The expectations would simply have been too high.   But this vision of what their lives would have become doesn’t comport with the fact that the three who lived didn’t go down that road.  Well, maybe Ringo.  Granted, John was the strangest Beatle, if perhaps the most gifted.  But I’m not sure why he’d have turned them into Prince clones.

This, however, is a nice idea:

It took until 2001, with the 9/11 attacks and Harrison on his deathbed, for Lennon and McCartney to reach a lasting peace. Their three-song acoustic set at the Concert for New York City at Madison Square Garden—“In My Life,” “Hey Jude,” and John’s solo hit, “Imagine,” in which they traded verses—was not only a cathartic moment for their fans (and just when their fans most needed it), but a redemptive moment for the Lennon-McCartney friendship.

The Lennon-Ono reconciliation happened earlier and out of public view, in the aftermath of the botched Beatles reunion. One late night at the farm, sozzled with Chartreuse, melancholy, and remorse, Lennon picked up the phone, called his old number at the Dakota, and pleaded, “Mother, I want to come home!” Ono assented to have Lennon spend the night, but in a separate bedroom—an arrangement that more or less stands to this day. Though no longer lovers, Ono and Lennon are once again each other’s confidants and frequent companions, with “the spare room” open to John whenever he needs emotional ballast.

“We do e-mails now,” Lennon says. “Not about working together again—that train has sailed, in the words of Austin Powers. Just old-man stuff: holiday snaps, ‘Did you see that so-and-so died?,’ the merits and demerits of coloring one’s hair.”

There’s more, but I gather Kamp was working toward a word count.

The Beatles broke up shortly before my 4th birthday and I had just turned 15 when Lennon was killed.  My Beatles phase had just barely commenced and the Double Fantasy tracks were dominating the airwaves.   At this point, my answer to the question, “The Beatles or the Stones?” is, of course, “The Who.”   But there’s no denying the enormous success those lads from Liverpool had achieved by their mid twenties and the profound impact they had on our music and popular culture.

And, while I don’t think David Kamp has captured what his life would be like were he still alive, it would have been awfully nice to find out.