In The Khashoggi Crisis, Trump’s Greed And Moral Cowardice Are On Full Display

President Trump is choosing money and moral cowardice over human life in his response to the disappearance of Jamal Khashoggi. 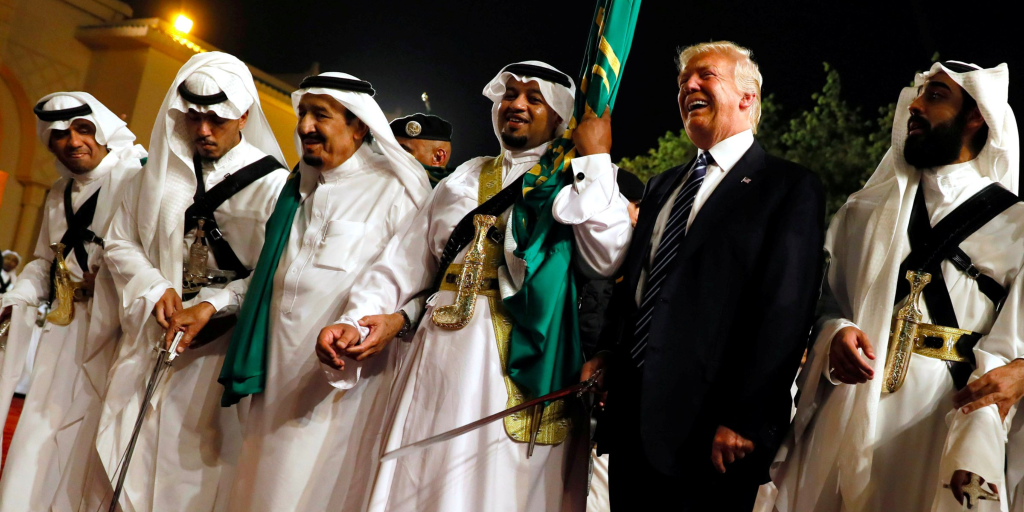 As the truth about the disappearance of Washington Post columnist, Saudi dissident, and American Permanent Resident Jamal Khashoggi becomes more apparent, the Trump Administration seems intent to respond in the weakest way possible even as many Republican members of the House and Senate have begun lining up to call for a tougher stance against Riyadh:

WASHINGTON — The suspected murder of a prominent Saudi journalist exposed a growing rift on Thursday between the White House and Congress over American policy on Saudi Arabia, as Republican lawmakers demanded an investigation of Jamal Khashoggi’s whereabouts even as President Trump declared his relations with Riyadh “excellent.”

The Saudi-led, United States-backed bombing campaign of Houthi rebels in Yemen — which has killed thousands of civilians — was already a source of tension between Congress and the Trump administration.

But last week’s disappearance of Mr. Khashoggi, a well-connected Saudi columnist for The Washington Post living in Virginia, has incensed Republicans and Democrats in Congress, who accused the White House of moving too slowly in pressing the kingdom for answers.

“The Saudis will keep killing civilians and journalists as long as we keep arming and assisting them,” Senator Rand Paul, Republican of Kentucky, said on Twitter on Thursday. “The President should immediately halt arms sales and military support to Saudi Arabia.”

But Mr. Trump quickly made clear he would not.

“What good does that do us?” Mr. Trump asked, speaking to reporters midday in the Oval Office.

“I would not be in favor of stopping a country from spending $110 billion — which is an all-time record — and letting Russia have that money and letting China have that money,” Mr. Trump said, referring to an arms deal with the Saudis, brokered last year, that the president has said will lead to new American jobs.

Earlier on Thursday, in an interview with “Fox & Friends,” Mr. Trump said American investigators were working with Turkish and Saudi officials to determine what happened to Mr. Khashoggi, who has not been seen sincehe entered the Saudi Consulate in Istanbul on Oct. 2.

Turkish officials suspect a Saudi hit squad killed and dismembered Mr. Khashoggi inside the consulate, and, according to two people Turkish authorities have briefed on their findings, say they have audio and video recordings that prove he was killed.

The president said he and his administration were “looking at it very, very seriously” and expected to have more information soon.

“We want to find out what happened,” Mr. Trump said. “He went in and it doesn’t look like he came out.”

“We don’t like it,” Mr. Trump said. “I don’t like it. No good.” But he added that relations with the kingdom were “excellent.”

While the White House is being circumspect in the light of the overwhelming evidence against the Saudis, members of the House and Senate on both sides of the aisle are being significantly more vocal:

[T]he most intense pressure on the Saudis is likely to come from Congress, where both Democrats and Republicans have criticized Saudi policies that promote Islamic extremism and connections to terrorism, especially after the September 11 attacks, in which 15 of the 19 hijackers were Saudi members of al-Qaeda. Since Saudi Arabia launched a war against the Houthi rebels in Yemen in 2015, a growing number of lawmakers have been concerned about the civilian death toll and have tried to curtail U.S. military assistance to the Saudis and their allies.

On Wednesday, a bipartisan group of 22 senators sent a letter to President Donald Trump, which will force the administration to investigate Khashoggi’s disappearance. The letter invoked a law, the Global Magnitsky Human Rights Accountability Act, that allows Congress to order an investigation by the executive branch into human-rights violations—including torture, abduction, and extrajudicial killing—“against an individual exercising freedom of expression.” The lawmakers called on Trump to impose sanctions on “any foreign person responsible for such a violation related to Mr. Khashoggi,” including “the highest ranking officials in the Government of Saudi Arabia.” The law gives Trump 120 days to conduct an investigation, identify the culprits, and determine whether sanctions are justified.

It’s unlikely that the Trump administration would blame the crown prince for Khashoggi’s fate, which would trigger sanctions against the most senior Saudi royals. But by invoking the Magnitsky Act, senators are sending a signal to Trump and Saudi leaders that they will not let this matter go. The letter was orchestrated by Republican Senator Bob Corker of Tennessee, the chairman of the Senate Foreign Relations Committee, and Democratic Senator Bob Menendez of New Jersey, the committee’s ranking member. Before sending it to Trump, Corker reportedly examined classified U.S. intelligence files on Khashoggi’s case, and said he had determined that the Turkish narrative was relatively reliable. “We need to take some type of action,” he said, “and there are some things we can do congressionally.” In an interview with CNN on Thursday, he went even further, saying: “My instincts say that there’s no question the Saudi government did this, and my instincts say that they murdered him.”

This isn’t the first time that Corker has sought to use his leverage as chairman of the Senate Foreign Relations Committee to pressure the Saudis. In June 2017, he put a hold on U.S. weapons sales to all six members of the Gulf Cooperation Council until Saudi Arabia and two of its allies, the United Arab Emirates (UAE) and Bahrain, settled their conflict with Qatar over its muscular foreign policy and relationship with Iran, the kingdom’s regional rival. Eight months after the crisis started, and with no sign of the Saudis backing down, Corker relented and lifted his hold, saying the arms deals were needed to help Washington fight terrorism.

Other lawmakers who have been supportive of the Saudis are also taking a hard line on Khashoggi’s case. Republican Senator Lindsey Graham of South Carolina, a member of the Armed Services Committee and a Trump ally, said that if the Saudis were found responsible for the journalist’s death, there would be “hell to pay.” He added, “If this man was murdered in the Saudi consulate in Istanbul, that would cross every line of normality in the international community.”

Even if the Magnitsky Act investigation does not lead to sanctions, Congress could make the Saudis pay a price for Khashoggi’s disappearance by restricting U.S. military assistance for the Yemen war. Members of Congress are already angry with the Trump administration for minimizing their concerns about civilian casualties and the United States being implicated in potential war crimes. Last month, Secretary of State Mike Pompeo certified to Congress that Saudi Arabia and the UAE are taking “demonstrable actions” to avoid harming civilians and making a “good faith” effort to reach a political settlement to end the Yemen war. Without the administration’s assurance every six months, the Pentagon cannot continue providing military assistance to the Saudi-led coalition waging war in Yemen.

On Wednesday, a bipartisan group of seven senators, likely emboldened by the Khashoggi crisis, wrote to Pompeo, questioning his decision to certify that Saudi Arabia and the UAE are doing enough to prevent civilian casualties in Yemen, where some estimates put the death toll at 50,000. Menendez is blocking the administration from moving ahead with a multibillion-dollar deal to sell more than 120,000 missiles and other munitions to Saudi Arabia and the UAE.

The aforementioned weapons deal, which Trump has claimed to be worth some $110 billion, has apparently been forefront in the President’s mind as the Administration struggles with a way to respond to the Khashoggi crisis without adversely impacting American relations with the Kingdom. Essentially, he argued that the life of an American resident alien and human being was not worth canceling such a valuable military deal. As Glenn Kessler notes in The Washington Post, the truth is that the deal, such as it exists, is likely worth far less than that. Even if it was the truth, though, the idea that an arms deal is worth more to Trump than pursuing the truth about the murder of a human being who has been legally living in the United States for years and who committed no crime other than being a dissident is yet another despicable reminder of the moral depravity that this man has brought to the Oval Office.

In addition to the arms deal, analysts have suggested that there may be other, more personal, reasons that Trump is reluctant to criticize the Saudis. For example, it’s fairly well-known that The Trump Organization has significant business interests in both Saudi Arabia and the United Arab Emirates, including both hotel deals and financial dealings with Saudis that are alleged to go back more than twenty years to the time when Trump was facing financial difficulties and seeking assistance with a bailout from a wide variety of foreign sources, including not just the Saudis but also the Russians. Additionally, there is significant evidence of extensive financial ties between the family of Trump’s son-in-law Jared Kushner and Saudis that are still being actively pursued to this date. Finally, it’s fairly well known that Kushner himself has a close relationship with Crown Prince Mohammed bin Salman to the point that bin Salman once boasted that he had Kushner “in his pocket.”  Given this, it’s not hard to figure out that Trump is likely more concerned about personal financial concerns and does not wish to cross the leaders of what he considers to be a friendly nation.

As Ishaan Tharoor puts it in The Washington Post, Trump has chosen authoritarianism over Khashoggi:

Of course, Trump’s predecessors weren’t dogged defenders of Arab democracy, either. “U.S. acquiescence to the death of the Arab Spring stemmed from both the cynical realism of key Obama officials and heavy pressure from the Saudis and the Emiratis, both of whom viewed the regional uprisings as mortal threats to their style of monarchical rule,” wrote Evan Hill for Slate.

“The reactionary kings and princes of the Gulf did all they could to smother Egypt’s democracy movement, funneling billions of dollars to Sissi and his supporters,” Hill continued. “Such was their antipathy to the Arab revolts and the political Islamists they empowered that they viewed even the Obama administration’s tepid openness to the Muslim Brotherhood as a foul conspiracy.”

But if the Obama administration struggled to reckon with political turmoil in the Middle East, Trump has made emphatically clear that he isn’t interested in humoring democratic experiments at all. The disappearance of Khashoggi only reinforces how much he’s willing to ignore to back his strongman friends — especially when it makes him rich.

None of this should come as a surprise, of course. From the start of his Presidency, we have seen this President display nothing short of contempt for America’s democratic allies, as I’ve noted here, here, and here, while displaying what can only be called stunningly obsequious behavior toward authoritarian rules such as the Saud family, General al-Sisi in Egypt, President Duterte in The Philippines, and, of course, Russian President Vladimir Putin and Chinese President Xi Jinping. After he became President, one of Trump’s first international trips was not to Mexico or Canada as has traditionally been the case with new Presidents, but to Saudi Arabia where he was lauded with what can only be described as a massive exercise in ego-stroking that has obviously worked well on this President. Now that ego stroking is paying off as Trump displays what can be called moral cowardice in response to cold-blooded murder. I’m sure the Saudis are appreciating the fact that their investment is paying off nicely.