Has the West inadvertently handed Iran a victory in Syria? 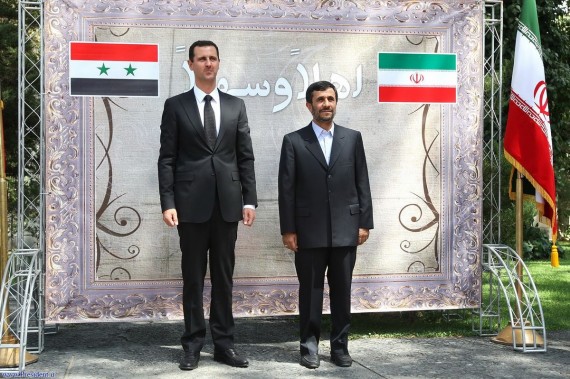 Vali Nassar, who worked closely with Richard Holebrooke in Afghanistan from 2009 to 2011 and is a member of the State Department’s Foreign Affairs Policy Board, argues that the real winner in the Syrian Civil War is Iran:

Syria’s uprising offered the possibility of a strategic defeat of Iran. In this scenario, Iran would be weakened by the collapse of Bashar al-Assad’s regime, its single Arab ally and a vital link to Lebanon’s Hezbollah militia. Isolated, Iran would become more vulnerable to international pressure to limit its nuclear program. And as Iran’s regional influence faded, those of its rivals — U.S. allies Turkey, Qatar and Saudi Arabia — would expand.

Instead, events in Syria are spinning in Iran’s favor. Assad’s regime is winning ground, the war has made Iran more comfortable in its nuclear pursuits, and Iran’s gains have embarrassed U.S. allies that support the Syrian uprising. What’s more, Iran has strengthened its relationship with Russia, which may prove to be the most important strategic consequence of the Syrian conflict, should the U.S. continue to sit it out.

Part of the U.S. calculation in declining to intervene has been the assumption that Assad would inevitably fall. The U.S., apparently, did not consider the implications of leaving the door open to a comeback by Assad. Reinforced by Hezbollah fighters and armed with Iranian and Russian weapons, the Syrian army broke through rebel lines in the central city of al-Qusair last week. The symbolic victory has dashed hopes for a quick end to the regime or a diplomatic resolution to the fighting.

Syria is now a proxy war, the outcome of which will determine the regional pecking order. In the Mideast, aura of power decides strategic advantage. Hezbollah’s prowess in Syria is a blow to Saudi Arabia, which has supported Hezbollah’s political opponents in Lebanon. The Syrian army’s gains are a setback to the Saudis, Qataris and Turks, all of whom have backed the rebels with money and weapons.

This idea of Syria as a proxy war in which the West and the Iranians is nothing new, it’s been part of the argument that the pro-intervention crowd has been making for quite some time. We need to back the rebellion in Syria, according to this argument, because the fall of the Assad regime would cut Iran off from one of its first real supporters in the world, and would make it far more difficult to arm Hezbollah in Lebanon. Nassar appears to be a believer in this argument, and argues that the Obama Administration has wasted an opportunity to take on the Iranians indirectly by declining to become more directly involved in Syria:

The U.S. has withheld lethal aid, not to mention military action. The Obama administration has eschewed intervention in Syria as a slippery slope to full-scale war, a costly repeat of the Iraq fiasco. In making this case, however, the administration sends a strong signal that it also would not go to war against Iran, despite President Barack Obama’s statement that no option is off the table when it comes to stopping Iran from acquiring nuclear weapons. When U.S. officials say their options for intervention are constrained by Syria’s air defense systems, they are also saying they fear Iran’s.

If there was once a realistic hope that Syria’s civil war would isolate Iran, that prospect has dimmed. Russia has assumed all along Assad could win, and thanks to Iran’s support, that now looks like a realistic outcome. Having already absorbed the wrath of Arab public opinion for supporting the ruthless leader, Russia has little reason to switch sides. By sticking with Assad, Russia projects the image of a steadfast ally that doesn’t bend to international pressure, in contrast to the U.S., which appears to want to wash its hands of the region and pivot away to Asia.

Russia’s nominal support for international pressure on Iran’s nuclear program notwithstanding, the two countries have long cooperated in the Caucasus and Central Asia to shape regional politics and minimize U.S. influence. Common ground on Syria is deepening their relationship. The longer the Syrian conflict draws out, the closer this alliance will grow.

The question, of course, is whether there was ever any realistic possibility that Russia would change its position on Syria, or at least whether it would take a position similar to the one it did on Libya when it joined China in abstaining on the Security Council Resolutions that authorized  intervention. Based on how Russia has acted over the past two years of war, and how it has acted over the decades, that seems hard to believe. Russia has had a long standing relationship with Damascus that dates back well into the Soviet era, it maintains a naval base in Northern Syria, and there are large numbers of Russian citizens living and working in the country even to this day. There’s been very little sign of any movement away from support of the Assad regime from Moscow, a fact that their recent decision to go ahead with the delivery of an air defense system would seem to attest to that fact. Would Russia have become less supportive of Syria if the U.S. and the west had become more involved in the war? Perhaps, but it seems to me that it’s just as likely that both they and Iran would have increased their support for the Assad regime, thus only serving to prolong the war.

Nassar seems to leave two things out of his analysis, which is odd because they have both been discussed endlessly since the war started. First, of course, is the composition of the rebel force itself which has become more and more dominated by radical elements with links to al Qaeda as the war has dragged out. One of the main concerns about getting further involved in the war in the West has been the issue of inadvertently aiding these types of groups, and creating a situation similar to what exists in Libya today. Given the fact that the Syrian Army is far better armed than the Libyans ever were, the dangers of sophisticated weaponry falling into the wrong hands would seem to be self-explanatory. Secondly, though, Nassar seems to think that the downfall of the Assad regime would be a net positive. Many analysts, though, point out that the nation is as likely, if not more, to devolve into sectarian war in the wake of a rebel victory than it is to result in a stable government that has control of the entire nation. Such chaos would seem to favor both the radical elements of the rebel coalition and the Iranian/Hezbollah alliance. So, getting involve may  not change the strategic picture vis a vis Iran as much as Nassar argues.

It would be nice to think that we could cleanly intervene in Syria, end the war, and solve our Iran problem all at the same time. Reality, however, would likely be very different.