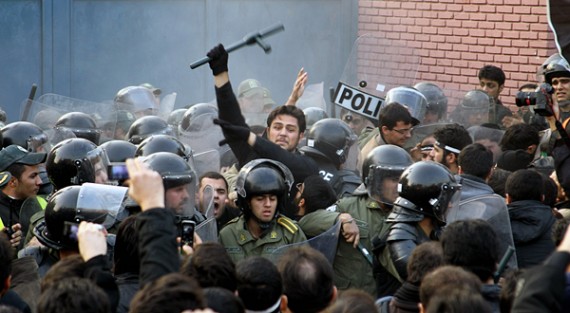 Dozens of hard-line Iranian students stormed the British Embassy in Tehran on Tuesday, bringing down the Union Jack flag and throwing documents from windows in scenes reminiscent of the anger against Western powers after the 1979 Islamic Revolution.

The mob moved into the diplomatic compound two days after Iran’s parliament approved a bill that reduces diplomatic relations with Britain following London’s support of recently upgraded Western sanctions on Tehran over its disputed nuclear program.

The protesters broke through after clashing with anti-riot police and chanting for its takeover. “Death to England,” some cried in the first significant assault of a foreign diplomatic area in Iran in years.

There was no immediate word on casualties or how many embassy employees were inside at the time of the assault, although it occurred after business hours had ended. More protesters poured into the compound as police tried to clear the site.

Smoke rose from some areas of the embassy grounds and the British flag was replaced with a banner in the name of 7th century Shiite saint, Imam Hussein.

The occupier called for the closure of the embassy calling it a “spy den” — the same phrase used after militants stormed the U.S. embassy in Tehran in 1979 and held 52 hostages for 444 days. Washington and Tehran have no diplomatic relations since then.

This comes on the heels of moves by the Iranian government to retaliate against the UK over sanctions related to Iran’s nuclear program:

A bill to downgrade Iran’s ties with Britain got final approval on Monday a day after parliament approved the measure compelling the government to expel the British ambassador in retaliation for sanctions imposed over Tehran’s nuclear activity.

The exceptionally rapid move by the Guardian Council, a panel of 12 clerics and jurists who judge whether legislation is Islamic, reflects the urgency with which Iran is treating its reaction to the sanctions announced by Britain last week.

Britain acted after a November 8 report by the U.N. nuclear watchdog presenting intelligence it said suggested Iran had worked on designing an atom bomb. Iran says the intelligence is forged and that its nuclear program has wholly peaceful aims.

“The members of the Guardian Council, after examination of the plan, have approved it unanimously,” council spokesman Abbasali Kadkhodai was quoted as saying on the website of the Iranian state broadcaster IRIB.

The bill requires the departure of the British ambassador within two weeks, leaving the embassy to be run by a charge d’affaires. The British government has called the legislation “regrettable” and “unwarranted.”

It’s being reported that as many as 50 embassy employees may have still be in the embassy when the students entered, but that many escaped out the back of the building. Hopefully, this doesn’t develop into a hostage situation.

The New York Times reports that the British Foreign Office is not amused:

The British Foreign Office in London said in a statement that there had been an “incursion by a significant number of demonstrators into our embassy premises, including vandalism to our property.”

“This is a fluid situation and details are still emerging,” the statement said.”It is utterly unacceptable and we condemn it,” the Foreign Office statement said, adding that Iranian authorities had “a clear duty” under international law “to protect diplomats and embassies in their country.”

“We expect them to act urgently to bring the situation under control and ensure the safety of our staff and security of our property,” the statement said.

One would hope that situation will be diffused quickly. In fact, al-Arabyia is reported that Iranian police are trying to clear the students from the embassy, which at least suggests that this doesn’t have any kind of official support.

Reuters is reporting that Mehr, a “semi-official” Iranian news agency, first announced that six hostages had been taken in the storming of the British embassy and then rescinded the claim. The Times of India, apparently, repeated the original announcement. As of this writing there are no confirmations of whether hostages have or have not been taken.