Tropical Storm Isaac won't be as much of a danger to Tampa as feared, but it's still having an impact. That's all because of bad scheduling ideas. 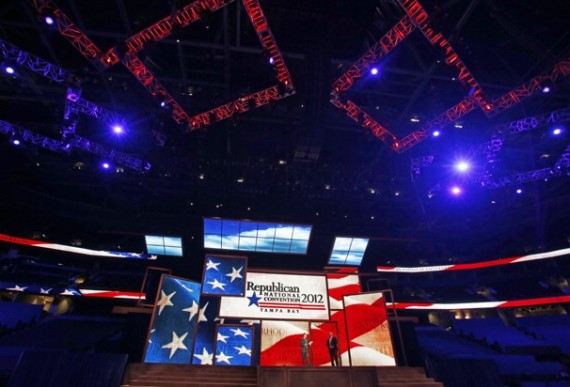 As I noted yesterday, the Republican Party has decided to essentially cancel the first day of the Republican National Convention due to the threat from what is still Tropical Storm Isaac (although most forecasts expect it to be upgraded to a Cat. 1 Hurricane once it enters the warm waters of the Gulf of Mexico.) Ironically, we woke up this morning to reports that the storm’s projected track has now shifted west and appears to be more of a threat to the Gulf Coasts of Florida, Alabama, and Mississippi. There’s also fairly strong indication, as reported by Brendan Loy, that New Orleans itself could end up being in Isaac’s crosshairs later in the week. If that happens, then the model projects that the storm could be a Cat. 3 storm if it stays in the Gulf long enough to reach the New Orleans area. For reference, Katrina was a Cat.2 storm when it hit New Orleans head-on in 2005. Already, the Governor of Florida has canceled his RNC-related activities for the next three days, and Louisiana Governor Bobby Jindal has said that he will not be in Tampa if Isaac makes a move for his state, and I presume the same would be true of the other Gulf Coast Governors. If that happens, it would be the second convention in a row that the Governors of Louisiana, Mississippi, and Alabama skipped their appearances because of a Hurricane.

Despite the fact that Isaac will apparently not be the threat to Tampa that it appeared to have the potential of being earlier this week, it does seem like the delay decided upon last night was a good idea. Under current conditions, Tampa is still expected to get heavy rain and wind tomorrow. The area where the convention is taking place is connected to the rest of , Tampa by bridges that would end up being closed in the event of heavy winds, meaning that delegates and others may end up getting stranded at the convention site. For reasons of safety alone, the decision to cancel proceedings on Monday was a no-brainer. Additionally, since the Democratic convention will only be three days itself due to Labor Day, they GOP won’t really be disadvantaged by a three-day convention instead of a four-day one.

In interviews today, Republican National Committee Chairman Reince Priebus has said that the convention will go forward with its business on Tuesday regardless of  what happens with Isaac. However, several reporters and commentators on the morning shows did raise the question of what kind of imagery would be sending if it continued with a fully-stocked convention schedule while Isaac was pounding into the U.S. Gulf Coast. Additionally, there’s the question of whether or not news coverage of the convention will be overshadowed by news coverage of the storm, especially if it starts to look like the storm is going to make a run for New Orleans, site of a disastrous storm just seven years ago. Fortunately for the GOP, if New Orleans does2 end up being the target it likely wouldn’t be in danger until Wednesday or Thursday depending on how fast the storm moves through the Gulf. Of course, the longer the storm stays in the Gulf, the stronger it will become.

Walter Russell Mead points out that the storm could also be a test for the Obama campaign as they head into their own convention next week:

A major Gulf Coast hurricane event in the next few days, and especially one affecting New Orleans, offers the Obama administration a major opportunity and a major risk. Are we ready for a fast and effective evacuation from New Orleans this time, or will there be a repeat of the unholy fecklessness of the last response? Is FEMA ready to do a better job this time than last? How effective are the new flood defenses? What will the White House do and how is this response any better than President Bush’s?

In the event that New Orleans takes a direct hit from a major storm, the Obama administration could see a major boost — or it could be holed below the waterline. Another failure in the Gulf could set up a narrative of failure that would dog the administration right through the November election. A triumphant success, however, would significantly support the administration’s claims that government can work and that this White House is a better manager than the last one.

So there’s tests for both sides here, and the risk that both conventions could find themselves sharing the news cycle with a really big storm. Perhaps that’s why they need to reconsider this idea of holding conventions during the height of the Atlantic hurricane season:

Republicans and Democrats always jockey for convention position. They must conduct their formal nominating processes in time to meet ballot deadlines in key states, but they each want to hold their events late enough to capture attention from undecided voters who haven’t yet tuned into the campaign.

But the number of undecided voters who actually spend an evening watching the convention proceedings is incredibly small. Instead, the big speeches Mitt Romney and President Obama will give over the next two weeks will be spliced into soundbites and played in 30-second increments, which will reach more undecided voters than the speeches themselves.

Another reason to hold conventions as late as possible has also gone out the window. Under public campaign financing law, both candidates have a set amount of money to spend between the moment they officially win the nomination and Election Day. If one candidate is nominated significiantly earlier than another, they have to spread their money thinner. That hurt Sen. John Kerry in 2004, when he spent the month of August husbanding his resources instead of taking the fight to President George W. Bush on equal footing.

But that’s a concern neither side has to deal with anymore. Both Obama and Romney have opted out of the public financing system, and it’s not likely that any major party nominee will adhere to its limits unless major and substantive changes to the system occur. Instead, both Romney and Obama are planning fundraisers in September to keep up their torrid spending pace.

So Romney and Obama have millions of dollars from wealthy donors effectively locked up until they actually win their nominations. If they were nominated in July, they would be free to tap into that money much earlier.

When planners get around to contemplating the 2016 conventions, they would do well to consider the realities of late summer. The benefits of waiting until the last possible minute are slim; few voters are paying attention to the speeches in real time, and money considerations are effectively off the table. The risks are significant; as hurricane activity increases, as it has over the last decade, the chances of a storm hitting during a convention week and interrupting the best laid party plans increase.

Now, we’ve had two convention cycles in a row following the 2008 model, and on both occasions the start of the GOP Convention has been delayed due to a tropical storm. Indeed, there’s no guarantee that the Democrats will get out of this unaffected by the weather as it’s entirely possible that North Carolina could find itself dealing with the remnants of Isaac early next week, or there could be another tropical system forming that will impact the East Coast of the United States next week. Was it not foreseeable to any of these people that holding conventions in areas subject to risks of a hurricane, especially during this time of year, and then scheduling it for the time of year when the Hurricane Season was at its height might not be a very good idea? If these were July or early August conventions, storms likely wouldn’t have even been an issue but now, they are. It seems to me that going back to the way we did things in the 80s might be a good idea.