The head of the Federal Reserve tells Congress that the economy is unlikely to enter recession this years, but isn't exactly going to be booming either. 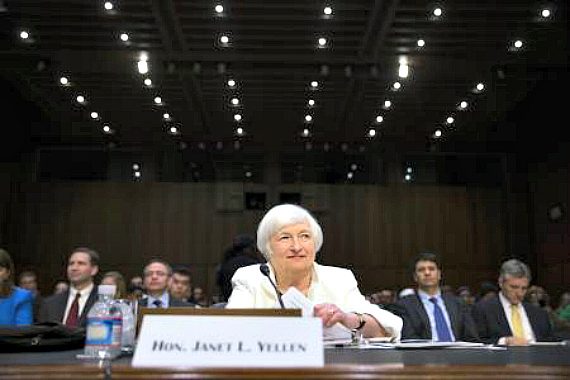 Federal Reserve Chairperson Janet Yellin hinted in her Congressional testimony that the Board of Governors is likely to hold back on raising interest rates at least through the summer:

While Ms. Yellen said that the American economy’s long-term prospects remain favorable, she signaled that headwinds, including slower employment gains in recent months, weak productivity growth and the persistence of a sluggish pace of inflation have prompted the Fed to adopt a more cautious stance.

“The latest readings on the labor market and the weak pace of investment illustrate one downside — that domestic demand might falter,” Ms. Yellen said in testimony before the Senate Banking Committee.

Ms. Yellen’s overall message on Capitol Hill echoed her comments at a news conference last week after the Fed’s decision to hold rates steady. But her tenor suggested that there was little chance of an increase in the benchmark federal funds rate at the central bank’s next meeting, in July, and that a move when policy makers meet again in September is hardly guaranteed.

“Proceeding cautiously in raising the federal funds rate will allow us to keep the monetary support to economic growth in place while we assess whether growth is returning to a moderate pace,” she said.

Mirroring the habit of Fed leaders going back decades, Ms. Yellen hedged her bets, emphasizing her positive outlook for the years ahead, if not the coming quarter or two.

But she acknowledged influential voices in academia and elsewhere who have warned that long-term growth could be substantially below the pace achieved in the decades before the Great Recession.

“Although I am optimistic about the longer-run prospects for the U.S. economy, we cannot rule out the possibility expressed by some prominent economists that the slow productivity growth seen in recent years will continue in the future,” she said.

In the question-and-answer portion of the hearing, Ms. Yellen termed recent productivity growth “disappointing,” and pointed out that business investment had been similarly weak during the recovery. She added that the productivity issue was something Congress needed to address by improving polices for workplace training and other issues.

Ms. Yellen’s appearance is part of two days of testimony before Congress that the Fed leader is required to present twice each year. Another session is scheduled on Wednesday before the House Financial Services Committee.

On the good side of the economic ledger, The Wall Street Journal reports that Yellen told the Senate committee that the risk of a recession around the corner is ‘quite low,’ but warned that we’re likely to see the same tepid growth we’ve become used to for much of the past seven years:

Federal Reserve Chairwoman Janet Yellen said the chances of recession this year are “quite low” despite mounting worries that the U.S. could be heading toward a downturn after seven years of tepid economic expansion.

“The U.S. economy is doing well,” she said Tuesday, kicking off two days of testimony to Congress on the economic outlook and monetary policy. “My expectation is that the U.S. economy will continue to grow.”

Still, a clearly tentative Fed leader has a long list of factors she worries will hold growth to a modest pace in the months ahead. Output growth, hiring, business investment and corporate profits have stumbled or slowed in recent months, leaving the Fed unsure when it will raise short-term interest rates again.

Fed officials next meet July 26-27. Ms. Yellen gave no indication that she expects to lift rates at that time. Instead, she stuck to a line that the Fed will raise rates gradually, cautiously and without a set timetable.

In a Wall Street Journal survey this month, economists said the probability of a recession in the next year had risen to 21%, up from just 10% a year earlier.

Ms. Yellen played down that worry and sought to cast a positive light on the outlook, pointing to the prospects for continued growth driven by U.S. consumer spending.

Ms. Yellen played down that worry and sought to cast a positive light on the outlook, pointing to the prospects for continued growth driven by U.S. consumer spending.

However, long-run headwinds to economic growth were a central theme in her prepared remarks and the questions she fielded from a mostly polite crowd of lawmakers on the Senate Banking Committee.

“Considerable uncertainty about the economic outlook remains,” Ms. Yellen said. Consumer spending and investment could falter, she said. Moreover, slow productivity growth could persist, which would hold down wage growth and income generation.

“We cannot rule out the possibility expressed by some prominent economists that slow productivity growth seen in recent years will continue into the future,” she said.

As has typically been the case, and in the grand tradition of predecessors such as Alan Greespan and Ben Bernanke, Yellen’s answers in response to specific questions about Federal Reserve policy were often quite general and purposefully vague, but from them and from other evidence we can get a fairly good idea of what the Board of Governors and the other analysts at the Fed think about the both the current state of the economy and its future course, especially through the remainder of the year. Namely, while it it appears that we’ll continue to see the same disappointing, lackluster growth that has typified the recovery that began in 2009, it’s unlikely that the economy will enter recession any time in the near future. If that happens, then Barack Obama would end his time in office being rather lucky when it comes to the state of the economy. While the first months of his first term were spent dealing with the impact of the Great Recession, we know now that the economy had actually started turning the corner by the end of 2008, and was officially ‘out of recession’ as measured by Gross Domestic Product by mid-2009. In any case, that’s a marked difference from Presidents Reagan, Clinton, and George W. Bush, all of whom dealt with economic downturns at some point during the course of their Presidencies. At the same time, while the recovery has been long-lasting, it has also not been very robust. The number of quarters where economic growth was higher than 2.5% can be counted on one hand, for example, and the jobs market in particular has been sluggish from the beginning, with many people who were impacted by a recession that is nearly a decade in the past still looking for work. This contrasts with the recoveries under Presidents Reagan and Clinton, which saw several periods during which annualized GDP growth would be as high as 3.5% or even 4.5% and is more consistent with the way the economy operated under George W. Bush, when the economy grew, but at hardly the rate we’d seen for most of the post World War II period..

In any case, given what we’d heard from the Fed last week, when it announced that it was once again skipping on raising interest rates and hinted that a rate increase was unlikely in July but could come in September, Yellen’s words should hardly come as a surprise. What’s potentially important about all of it, of course, is what it could mean for the 2016 elections. The general rule is that a growing economy is generally good news for incumbents and bad news for challengers because voters become reluctant to change horses in mid-stream if things seem to be going well. The curve ball that may be coming for the election, though, is that there’s plenty of evidence that the public perception of the state of the nation and the economy is far different from what the statistics show. The benchmark right direction/wrong track poll, for example, currently shows that some two-thirds of Americans believe that the country is on the wrong track, a number that has been fairly consistent for some time now. A separate question that nearly every pollster asks, which asks voters if they are personally satisfied with the state of the nation, shows that 70% of respondents are dissatisfied. Numbers like this likely in part explain in part why renegade candidates like Donald Trump and Bernie Sanders have had success appealing to voters. What impact this will have on the election is unclear, but the fact that it’s already clear that we’re headed into an election where mudslinging will predominate over actual discussion and debate, it’s likely to mean a lot of frustrated, dissatisfied Americans in November no matter who wins.