John McCain is bidding for a sixth term in office, with a challenge from the right in tomorrow's primary and Donald Trump at the top of the ticket in November. 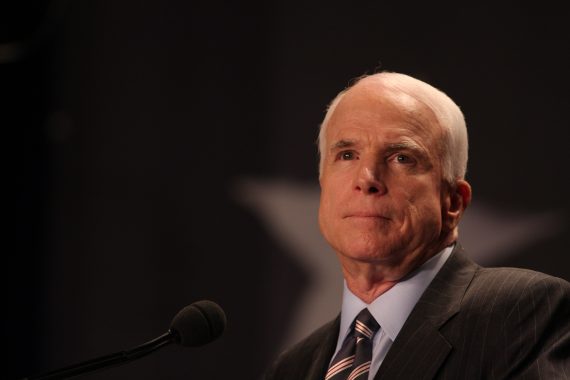 Senator John McCain is down to the final hours in the first part of his bid to win a sixth term in the U.S. Senate, and it’s been his toughest fight so far:

PHOENIX — Sen. John McCain insists that he has no plans to change course or alter the high-wire reelection strategy forced upon him by the candidacy of DonaldTrump.

The Arizona Republican says he expects to remain steadfast in his support for his party’s presidential nominee all the way to Election Day, while reserving the right to regularly criticize Trump when the GOP nominee says or does something objectionable.

That whiplash effect — frequently critiquing Trump yet remaining on his side in the presidential race — has left McCain in more political jeopardy than ever in his 30-year career in the Senate.

The campaign is forcing McCain to do battle on multiple fronts, testing his political dexterity unlike in any race, including his two unsuccessful bids for the presidency.

First he must clear his primary on Tuesday, a day after he turns 80, against an arch- conservative whose campaign received a late six-figure boost from a Trump donor. Then, assuming he wins the nomination, he must move into a general election just two months away against a well-funded Democrat, U.S. Rep. Ann Kirkpatrick, whose campaign is wrapping McCain’s support for Trump around the veteran Republican’s neck in a bid to drive up Latino turnout.

McCain’s personal and political antipathy to Trump has led some experts to suspect that he will dump Trump after he secures his party’s nomination Tuesday. The political calculus is that he desperately needs Trump’s voters to win the primary but he needs anti-Trump independents to win the general election.

“I have no plans for that,” McCain said at his campaign headquarters, adding that his position on Trump is “pretty clear,” given how often he has challenged the Republican nominee. “My response to some of the things that Trump does, I don’t hesitate to speak up.”

McCain’s challenges extend beyond the Trump complications: He is running as an octogenarian with clout and experience in Washington in an era in which anti-establishment views are on the rise. He’s running as a plugged-in senator who will deliver for his state’s parochial interests, particularly on water issues, after years of burnishing his image as a maverick who chastised his Senate colleagues for using taxpayer dollars for political pork to win votes back home.

And he’s running as a staunch military hawk who wants an international force of 100,000 troops, led by 10,000 Americans, fighting Islamic State forces in Syria at a time when the public has grown weary of Middle East wars.

The most immediate embodiment of McCain’s problems is Kelli Ward, 47, a former state senator who knows that Trump crushed the field in the March presidential primary by stoking the fires of Arizona’s long-running battles over illegal immigrants crossing the southern border.

Ward is McCain’s main primary challenger Tuesday; she has attended Trump rallies and embraced his rhetoric while highlighting McCain’s bipartisan work on immigration bills that would grant undocumented immigrants a path to citizenship.

“He’s the champion of compromise,” she said in an hour-long interview in a Scottsdale campaign office, not intending it as a compliment.

That would leave McCain just nine weeks to try to draw those many anti-McCain conservatives to his side while appealing to independent and moderate Democrats to try to hold off Kirkpatrick.

In a normal presidential year, the state’s conservative tilt helps Republicans, as it did for Sen. Jeff Flake (R-Ariz.), who won his 2012 race by three percentage points in part because of Mitt Romney’s victory here over President Obama by more than nine points.

Today, according to McCain’s pollster, Bill McInturff, “Trump and Clinton are essentially running even in Arizona.”

This isn’t the first time McCain has been in this position. Six years ago in the midst of the Tea Party surge that brought the GOP into control of the House of Representatives, McCain faced off with former Congressman J.D. Hayworth, a conservative who was strongly backed by many national Tea Party organizations. Given that at that point we were only two years out from the 2008 election and political memories were fresh with both that loss and with McCain’s support for comprehensive immigration reform and McCain was a high value target for the Tea Party groups in that election year. While Hayworth had a lot of Tea Party money behind him, polling in advance of the primary showed that he was not posing a serious challenge to the incumbent and, in the end, McCain ended up beating him easily and going on to easily defeat his Democratic opponent. McCain once again became a top target of the Republican far right when he announced his intention to seek a sixth term, with McCain opponents rallying behind Kelli Ward, a physician whose previous political experience consists of a single term in the Arizona State Senate. Most recently, Ward drew criticism from fellow Arizona Republicans when she ran an ad suggesting that McCain could die in office if re-elected to a sixth term. Other than that, Ward has run a better campaign than Hayworth did, and is not perceived as being as out of the mainstream as he was by the time 2010 rolled around, polling has shown McCain largely leading her in his bid to win his party’s nomination. Most recently, a Data Orbital poll found McCain leading Ward 50% to 29% and a CNN/ORC poll showed him leading her 55% to 29%. If these numbers hold up, then we can expect to see McCain easily win the GOP nomination tomorrow.

After winning the nomination, though, McCain likely faces what could be the toughest General Election campaign since he was first elected to the Senate. According to the RealClearPolitics average, McCain (44.7%) has an eight point lead over Democratic nominee Ann Kirkpatrick (36.7%). At the same time, though,, it’s worth noting that Arizona appears as though it could end up being a battleground state at the Presidential level, with the current RealClearPolitics average showing Donald Trump with a narrow 1.5 point lead over Hillary Clinton in a head-to-head match and a 4.5 point lead in a four way race that includes Gary Johnson and Jill Stein. That’s closer than the margin of victory that Republicans have typically had in the state, which has gone for the Republican Presidential nominee in every election since 1952 with the exception of the 1992 and 1996 Presidential elections when Bill Clinton managed to eke out a small victory thanks largely to the presence of Ross Perot on the ballot. If Arizona ends up being a battleground state this year, then it could have an impact on McCain’s own efforts, especially if Trump ends up being a drag on the ticket. Although, it should be noted, that McCain managed to easily win re-election in 1992 notwithstanding that George H.W. Bush narrowly lost at the top of the ticket.

As noted above, I expect that McCain will win easily tomorrow, and he appears well-positioned to win in November. However, like many incumbents he is likely to face a difficult two months dealing with the man at the top of his party’s ticket, who may end up being a bigger problem than his Democratic opponent.