It appears that a counterintuitive meme is spreading:  John Patrick Bedell, who was killed while he opened fire at the Pentagon Metro stop, was a right-wing extemist.

John Patrick Bedell, whom authorities identified as the gunman in the Pentagon shooting on Thursday, appears to have been a right-wing extremist with virulent antigovernment feelings.

If so, that would make the Pentagon shooting the second violent extremist attack on a federal building within the past month. On Feb. 18, Joseph Stack flew a small aircraft into an IRS building in Austin, Texas. Mr. Stack left behind a disjointed screed in which, among other things, he expressed his hatred of the government.

Details of Mr. Bedell’s case are still emerging. But writings by someone with his same name and birth date, posted on the Internet, express ill will toward the government and the armed forces and question whether Washington itself might have been behind the Sept. 11 terrorist attacks.

The evidence is starting to look pretty persuasive, given other details that are emerging, that the Internet postings in question are indeed from the same J. Patrick Bedell.  It’s true that Bedell harbored a bizarre array of political beliefs, some of which are from the extreme right, some from the extreme left, and some from an extreme libertarian/anarchist view.  But, to the extent that his attack on the Pentagon was political — much less an act of terrorism — it was motivated by 9/11 Trutherism.  That ain’t right-wing.

Naturally, this argument has roiled the blogosphere, largely along predictable lines.

Also, I’d add, they were clinically insane.  Ironically, left-leaning MSNBC (“Pentagon shooter had history of mental illness“) gets it right:

The California man who was killed in a shootout with Pentagon police had a history of mental illness and had become so erratic that his parents reached out to local authorities weeks ago with a warning that he was unstable and might have a gun, authorities said Friday.

Bedell was diagnosed as bipolar, or manic depressive, and had been in and out of treatment programs for years. His psychiatrist, J. Michael Nelson, said Bedell tried to self-medicate with marijuana, inadvertently making his symptoms more pronounced.

Can we please stop with the political name-calling whenever one of these nuts goes off?

Look, we’re a big country.  There are over 300 million of us.  Almost everyone holds a position or two that’s way off the charts and a whole lot of people believe in 9/11 Trutherism, black helicopters, and all the rest.  Less than a handful of those people are out trying to kill people.    However stupid or loathesome a political view may be, the fact that some nut also holds it adds nothing to the counter-argument. 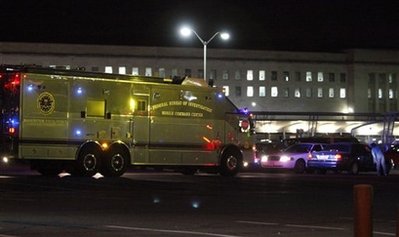