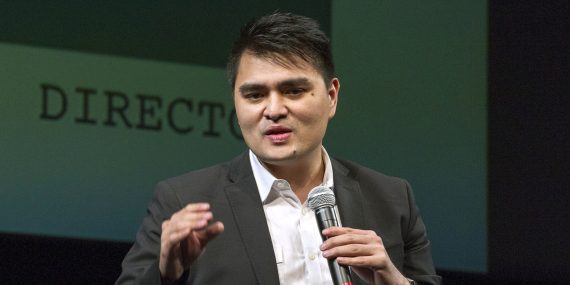 Jose Antonio Vargas, a Pulitzer Prize winning journalist who revealed that he had been in the country illegally since he was a child in a 2011 article in The New York Times and has since become something of an activist on immigration issues, has been detained in Texas:

McAllen, Tex. — Jose Antonio Vargas, an undocumented Filipino immigrant who is arguably the most high-profile leader of the immigrants’ rights movement, was detained Tuesday morning at a Border Patrol checkpoint in the airport here before he could board a flight to Houston.

He was handcuffed and taken for processing to the McAllen Border Patrol station, which has been teeming in recent weeks with undocumented immigrants from Central America, part of a wave of migrants who have been streaming over the border.

Mr. Vargas, a Pulitzer-winning journalist, came last week to McAllen, a city just a few miles north of the border with Mexico, for a news conference and vigil organized by United We Dream, an undocumented youth organization, outside a shelter downtown for recently released Central American migrants. On his Twitter feed, Mr. Vargas said he did not realize until he was here that he would have to cross through a Customs and Border Protection checkpoint to leave the Rio Grande Valley.

His apprehension poses a dilemma for the Obama administration, which will now have to decide how to handle his case at a time when the border situation has made all decisions about immigration high profile and politically fraught.

Mr. Vargas travels on a valid Filipino passport, but it has no current United States visa in it.

In an interview Sunday, Mr. Vargas said he had flown to many events around the country in recent months where he showed a documentary film he produced, “Documented,” about his life as an undocumented immigrant. He had not been stopped at airport checkpoints because Transportation Security Administration officials checked his passport but not his immigration status.

“I didn’t even think twice about it,” when he accepted the invitation to join the news conference, Mr. Vargas said. When he realized that he was effectively trapped, he said, “No, this can’t be for real.” He wrote about his limbo in McAllen for the magazine Politico last week.

Here’s a photo of @joseiswriting in handcuffs, because the Border Patrol has nothing more pressing to do apparently pic.twitter.com/dN8KewqeZr

I wrote about Vargas’s case, and the danger he believed he was probably in by being so close to the U.S.-Mexican border, on Sunday and, as I noted at the time, his case is obviously a demonstration of the need for immigration reform and that it didn’t make sense for the government to specifically target him for deportation. In this particular case, it doesn’t appear that this was the result of deliberate targeting, but rather the fact that Vargas was caught during the course of a routine check at the McAllen airport. Whatever the circumstances of his arrest, though, the question now is what happens to him going forward. Theoretically, immigration authorities could choose to decline to prosecute Vargas as simply release him or only file minimal charges against him that would not result in deportation. The other option, of course, would be that the matter could proceed forward just as any other immigration case does, with the same delays and bureaucracy that everyone else experiences. Given his work experience and his connections to the media, one would imagine that Vargas would be heavily involved in documenting that process. So, maybe, his arrest will give Americans a glimpse inside a system that few of us ever see up close.

Update: It is not late in the afternoon and it appears that Vargas has been released:

Pulitzer Prize-winning journalist Jose Antonio Vargas, who is also an undocumented Filipino immigrant and an immigration reform activist, was detained Tuesday in Texas and held at a Border Patrol station. He has since been released.

“As an unaccompanied child migrant myself, I came to McAllen, Texas, to shed a light on children who parts of America and many in the news media are actively turning their backs on. But what I saw was the generosity of the American people, documented and undocumented, in the Rio Grande Valley,” Vargas said in a statement after his release

“I’ve been released by Border Patrol. I want to thank everyone who stands by me and the undocumented immigrants of south Texas and across the country. Our daily lives are filled with fear in simple acts such as getting on an airplane to go home to our family.”

After arriving in McAllen, Vargas quickly realized that it would be nearly impossible for him to leave the area unquestioned.

“In the last 24 hours I realize that, for an undocumented immigrant like me, getting out of a border town in Texas—by plane or by land—won’t be easy,” he wrote in Politico. “It might, in fact, be impossible.”

Before his release, Cristina Jimenez, the managing director for the immigrant youth-led network <ahref=”http://unitedwedream.org/”>United We Dream, issued a statement Tuesday.

We stand in solidarity with Jose Antonio and demand for his immediate release, but we must remember that there are thousands of people along the border that live with this same fear every day,” she said.

“Our undocumented community along the border is trapped within its own country, unable to leave and surrounded by checkpoints. It’s immoral that people aren’t free to move around the country they know as home because of a system that seeks to criminalize them.”

“As an unaccompanied child migrant myself, I came to McAllen, Texas, to shed a light on children who parts of America and many in the news media are actively turning their backs on. But what I saw was the generosity of the American people, documented and undocumented, in the Rio Grande Valley.

It is unclear from these early reports if Vargas has actually been charged with anything, if he faces the possibility of being charged in the future, or if he has simply been released with ICE once again declining to pursue a case against him.

Further details from The Washington Post, which indicates that Vargas will have further dealings of some kind with ICE in the future:

Jose Antonio Vargas, the former journalist who has spent the past few years crusading on behalf of fellow undocumented immigrants, was detained by U.S. Customs and Border Protection agents Tuesday and held for much of the day after trying to leave a Texas border town without a valid U.S. visa.

Vargas, taken into custody Tuesday morning at McAllen-Miller International Airport, was held for about eight hours until his early-evening release after receiving a Notice to Appear before an immigration judge.

“As an unaccompanied child migrant myself, I came to McAllen, Texas, to shed a light on children who parts of America and many in the news media are actively turning their backs on,” Vargas said in a statement following his release. He added: “I want to thank everyone who stands by me and the undocumented immigrants of south Texas and across the country. Our daily lives are filled with fear in simple acts such as getting on an airplane to go home to our family.”

The high-profile and widely documented detainment came after Vargas made a series of public pronouncements that he might be trapped on the border. Vargas, 33, is a Filipino immigrant who has lived in the United States, without proper documents, since he was 12.

Department of Homeland Security spokeswoman Marsha Catron said in a statement that federal agents who encountered Vargas at the airport “apprehended him after he stated that he was in the country illegally.” Vargas, Catron said, was taken to the McAllen Border Patrol Station, “where he was processed and provided with a Notice to Appear before an immigration judge. He was released on his own recognizance after consultation with Immigration and Customs Enforcement (ICE).”

According to DHS officials, a foreign passport is an acceptable primary form of ID for travel. TSA agents verify that the name on the ID “substantially matches the name on the travel document.” Agents, officials said, do not check immigration status.

So, it would appear that Vargas will have further dealings with the government on this issue.

FILED UNDER: Borders and Immigration, Law and the Courts, Quick Takes, US Politics, Jose Antonio Vargas