Cliven Bundy still has his defenders among the hardcore right, but many people have joined Kentucky's junior Senator in throwing Cliven Bundy under the bus 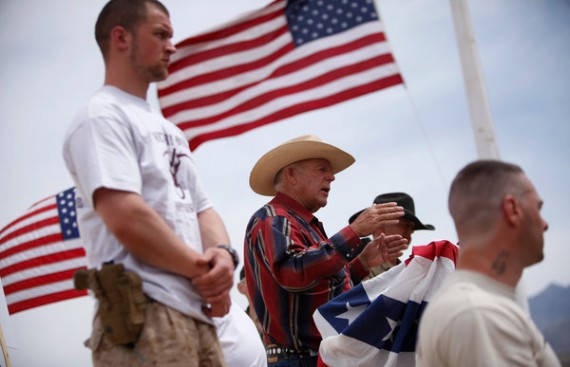 Senators Rand Paul and Dean Heller and both made public statements of support for Nevada rancher Cliven Bundy in his dispute with the Bureau of Land Management over grazing fees. However, now that Bundy has been quoted in the New York Times making statements that can only be characterized as racist, they have quickly distanced themselves from him:

“His remarks on race are offensive and I wholeheartedly disagree with him,” Paul said in a statement, according to Business Insider.

“Senator Heller completely disagrees with Mr. Bundy’s appalling and racist statements, and condemns them in the most strenuous way,” Heller spokeswoman Chandler Smith said in a statement.

Both Paul and Heller have previously defended Bundy, the Nevada rancher who is in a standoff against the federal government. Heller has referred to his supporters as “patriots.”

But on Thursday, The New York Times reported Bundy using the word “Negro” and wondering if blacks were better off as slaves.

“They abort their young children, they put their young men in jail, because they never learned how to pick cotton,” Bundy said over the weekend, according to the Times. “And I’ve often wondered, are they better off as slaves, picking cotton and having a family life and doing things, or are they better off under government subsidy? They didn’t get no more freedom. They got less freedom.”

Appearing on “CBS This Morning” on Thursday, Texas Gov. Rick Perry said he hadn’t seen Bundy’s comments. The Republican called Bundy a “side story” in the greater issue of how the federal government deals with public and private land.

Fox News host Greta Van Susteren on Thursday released a statement on her official blog: “Let me make this plain: I condemn what Cliven Bundy said about African Americans.” Van Susteren has devoted significant time on her program to the Bundy issue, interviewing bothPaul and Carol Bundy, Cliven’s wife.

“Morning Joe” co-host and former GOP Rep. Joe Scarborough on his program Thursday morning slammed Bundy and Republicans who have embraced him. He said that Bundy is demanding “a right that no other rancher in America has.”

The host appeared to be equally upset with conservatives that have championed Bundy over the course of the past few weeks. “There’s nothing conservative about this man,” Scarborough said. “This is where nihilism about the federal government gets you in trouble every time.”

To be before, Paul and Heller weren’t exactly full-throated Bundy supporters to begin with. Their comments were sympathetic to his arguments, but addressed more to the broad issue of Bureau of Land Management policy rather than the specific facts of the Bundy case. Nonetheless, the Senators aren’t the only ones backing away from even mild support of Bundy this morning. In addition to people like Perry, Van Susterin, and Scarborough, I’ve seen others on the right be very quick to dissociate themselves from the Nevada rancher rather than defending what he said. Perhaps this is an indication that pundits and advocates on the right are finally starting to learn from their past mistakes. By contrast, there seem to be others on the right who remain steadfast in their support of Bundy notwithstanding his comments about race and slavery, but that’s just indicative of a wider divide I’ve noticed on the right over this case.

Even before these statements of Bundy’s I had noticed that there was a clear divided on the right about the merits of Bundy’s claims, the manner in which the Federal Government acted, and the responses from Bundy and his supporters from various wings of the Tea Party and militia movements. On the one side, of course, there are those who seen Bundy as the victim of an unjust and arbitrary government, including those who have stated quite publicly that they rejected the right of the Federal Government to own land notwithstanding that such a power is expressly authorized by Article IV, Section 3, Clause 2 of the Constitution. On the other side, though, has been another group of conservatives and libertarians who were just as vocal in their opposition to what Bundy was going and what he stood for. These people pointed out, quite correctly, that the Federal Government’s title over the land where Bundy grazed his cattle had been recognized for more than 100 years, that Bundy had apparently previously paid grazing fees before suddenly deciding not to do so, and that his claims to the land had been adjudicated in court in a hearing that he participated in. Indeed, the entire reason that the BLM and other law enforcement agencies were present outside Bundy’s property was to enforce an order that resulted from those Court proceedings which Bundy failed to appeal. Under this narrative, which I largely agree with, Bundy was little more than a scofflaw disobeying a Court Order. Even if there are legitimate questions about Federal land management policy, that does not justify defying Court orders and threatening to kill Federal Agents if they ventured onto your property to enforce those Orders.

On some level, the division on the right that existed over Cliven Bundy even before the comments that became public today seems to be another example of the growing rift in the party between die-hard Tea Party activists and conservatives who want to actually win elections. That’s a battle that was brewing for some time, of course, but it didn’t really become public until the disaster of the October 2013 government shutdown, spearheaded by Senator Ted Cruz and a group of Tea Party linked organizations such as FreedomWorks. The rift would have continued to widen even without the Bundy ranch standoff, but now that it has happened we’re likely to see further examples of Tea Party and “establishment” conservatives going after each other, especially as we head into primary season in states like North Carolina, Georgia, Kentucky, and Mississippi.