The last thing that Haiti needed was for a former dictator to return, but that's exactly what has happened. 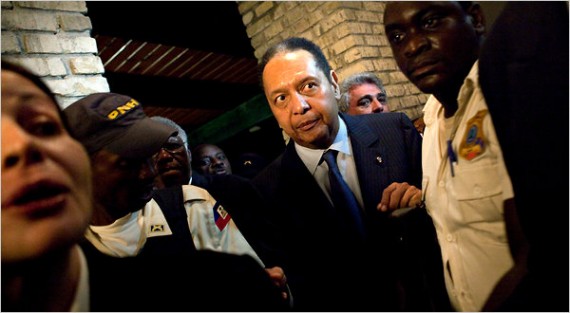 MEXICO CITY — Haiti’s political crisis took a stunning turn on Sunday when Jean-Claude Duvalier, the dictator known as Baby Doc who was overthrown in 1986, arrived unexpectedly in the capital from exile in France.

Haitian television and radio stations reported that Mr. Duvalier, dressed in a blue suit, landed shortly after 6 p.m. in Port-au-Prince on an Air France flight and told reporters that he had simply come to help Haiti, moved by images of the first anniversary of the earthquake that devastated the country.

The Associated Press reported that he would give a news conference on Monday and that he planned to stay in the country for three days.

The sudden appearance of Mr. Duvalier, 59, who ruled Haiti with brutality and corruption for nearly 15 years, threatened to further convulse a country struggling to recover from the earthquake and a lingering cholera epidemic.

In 2007, President René Préval said Mr. Duvalier could return but would face justice for the money the government said he had looted from the treasury, as well as for the deaths and torture of political opponents at the hands of the secret police.

Still, Mr. Duvalier has long flirted with returning, telling reporters over the years that he would like to go home. His nickname derives from his being the son of François Duvalier, known as Papa Doc, a much feared dictator in the 1950s and ’60s.

Since nobody in Haiti seems to know that Duvalier, who has been spending his exile in relative luxury in France, was coming home the open question is who let him back:

What’s perhaps even harder to imagine is how the government of French President Nicolas Sarkozy could have allowed Duvalier, who arrived from Paris, to board an Air France flight bound for Haiti under the current circumstances. “For the French to have even permitted [Duvalier] to leave their territory amidst an electoral and cholera crisis here shows they have not much interest in the welfare of the Haitian people,” says a high-ranking Haitian government official.

French officials, who technically had no power to stop Duvalier, weren’t responding to that question on Sunday night. But Port-au-Prince media were rife with conflicting conspiracy theories — all of them focused on last week’s election report by the Organization of American States (OAS). It concluded that Jude Célestin, the candidate of Haitian President René Préval’s party, actually finished third, not second, in the first-round balloting on Nov. 28, and that Célestin should therefore not be eligible for a runoff vote — which, ironically, was originally supposed to have been held Sunday but has been postponed

The question now is, Who if anyone in this standoff benefits from the sudden presence of Duvalier? Some Haitian pundits on Sunday said it might be meant to compel Préval to acquiesce to international demands to sacrifice Célestin. But it’s hard to believe, even under Sarkozy, that France and the international community would stoop so low diplomatically as to encourage Duvalier to return to Haiti for that purpose. Others suggested that Duvalier’s return instead gives Préval leverage by showing the international powers how much more turbulent things can get if they keep messing with the Haitian President. But again, could even Préval be cynical enough to open the door to one of the 20th century’s most notorious dictators for that kind of political gain? Either way, sources close to Duvalier told reporters Sunday that he’d entered Haiti on a diplomatic passport — but if so, it was unclear which country had issued it to him.

In the time since Duvalier was deposed, Haitians have withstood hurricanes, political violence, corruption, the worst economy in the Western Hemisphere (even Cuba is better off economically than Haiti), and of course a devastating earthquake just a year ago that the country has still not recovered from. The absolute last thing they needed was for a brutal dictator with a history of using populism and the resentments of the country’s poor to maintain his hold on power over the years to return. Much like Ed Morrissey, I find it hard to believe that Duvalier would leave the luxury of his French exile to assist the current Haitian government, or the Organization of American States, in some kind of bizarre effort to resolve a political logjam in Port-au-Prince. We can’t know if he has ulterior motives, of course, but if he does the scenarios virtually write themselves:

This drama could actually send many Haitians, albeit with blinders on, to the side of Duvalier, whose stunning return might make him seem a figure of stability and order amid their country’s nightmarish uncertainties. Baby Doc had already announced his desire to return to Haiti in 2004, after the ouster of populist President Jean-Bertrand Aristide (whose supporters may now clamor more loudly for his own return from exile in South Africa). Duvalier even said he wanted to run for President himself in the 2006 elections. But Haitian officials made it clear that if Duvalier did return, he’d face trial on charges of corruption and brutality during his 15-year dictatorship, which had succeeded the even harsher regime of his father, François “Papa Doc” Duvalier, who died in 1971.

Given how poor, pathetic, and desperate Haiti is the return of Duvalier to power isn’t entirely inconceivable, unless the United States and the rest of the OAS were to weigh in to make sure it doesn’t happen. Nonetheless there is absolutely good that can come from Duvalier’s return, and the one  thing that is truly sad about this whole situation is that, in many ways, Haiti is no better off today than it was on the day the Baby Doc Duvalier was flown to France on a U.S. Air Force jet.