The Justice Department has launched a widespread investigation into the operation of the Chicago Police Department in the wake of the murder of LaQuan McDonald. 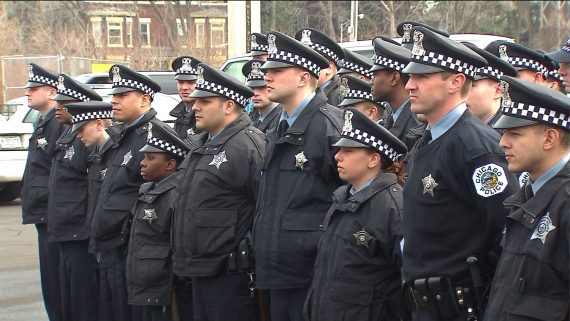 Attorney General Loretta Lynch announced yesterday that the Justice Department would be investigating the Chicago Police Department in the wake of the announcement late last month that an officer was being charged with murder in connection with the death of an African-American man more than a year earlier and allegations of an attempted cover-up:

CHICAGO — The Justice Department will begin a far-ranging investigation into the patterns and practices of the Chicago Police Department, part of the continuing fallout over a video released last month showing the police shooting of Laquan McDonald, Attorney General Loretta Lynch announced Monday.

The Justice Department has long had concerns about the Chicago department. But the current scrutiny centers on a controversy that began with a two-paragraph statement a year ago from the Chicago Police Department about the death of a young black man who had been shot 16 times by the police.

“Near the intersection of 4100 S. Pulaski, uniformed officers confronted the armed offender who refused to comply with orders to drop the knife and continued to approach the officers,” said the statement, from Oct. 21, 2014. “As a result of this action, the officer discharged his weapon striking the offender.”

On the night of the shooting, a police union spokesman, Pat Camden, went further, announcing at the scene that Mr. McDonald was “a very serious threat to the officers and he leaves them no choice at that point but to defend themselves.” Mr. Camden said, “He was coming at the officer.”

For months in 2014 and 2015, as police shootings were drawing close scrutiny around the nation, that was all most Chicagoans knew about Mr. McDonald’s death. That changed last month when a county judge ordered that a police video be made public. It showed Mr. McDonald seeming to try to jog or walk past officers, then veering at an angle away from them before being shot, again and again, even as he lay on the pavement.

The video outraged many. Along with anger over the shooting, there is an added element fueling frustration here: a lingering sense that the authorities, from the police department to City Hall, tried to keep the case out of the spotlight as long as possible.

“No person, no sane human being who’s lived in this city, no sane human being, looks at this situation and thinks there weren’t people who knew a lot and refused to divulge it,” said Mariame Kaba, a member of the Chicago-based activist group We Charge Genocide. “That, to me, is a cover-up.”

Critics have raised many questions.

Did Mayor Rahm Emanuel’s re-election fight play a role in his administration’s decision this year to pay $5 million to Mr. McDonald’s family members even before they filed a lawsuit? Why did City Hall include a provision in the settlement to keep the video private at least temporarily? And why did it take Anita Alvarez, the Cook County State’s Attorney, 13 months to charge the police officer involved in the shooting? She waited until hours before the city was forced to release the video to charge the officer, Jason Van Dyke, with first-degree murder.

“People have a lot of questions, and I don’t think this is going away any time soon,” said the Rev. Marshall E. Hatch, who leads a West Side church. “It was almost surreal to think people thought this was a life that could be thrown away and walked over for apparent political advantage.”

The Obama administration, buffeted by nationwide unrest over police conduct, has opened about two dozen investigations into law enforcement agencies in Baltimore; Ferguson, Mo.; Los Angeles; and elsewhere. But the Chicago investigation is one of the biggest ever opened by the department into the reports of abusive patterns by a police agency.

Ms. Lynch said she hoped that the investigation would not only examine whether practices in Chicago violated constitutional practices, but also deter abuses elsewhere. Suspicions of hostile treatment by the public, she said, have fueled unrest in a number of cities.

“Building trust between law enforcement officers and the communities they serve is one of my highest priorities as attorney general,” Ms. Lynch said. “The Department of Justice intends to do everything we can to foster those bonds and create safer and fairer communities across the country.”

Ms. Lynch would not predict how long the investigation might take.

This investigation is separate from any proceedings that the Justice Department may take against Officer Jason van Dyke individually in connection with the death of LaQuan McDonald for violations of McDonald’s civil rights. That investigation is apparently still ongoing ad will likely away the outcome of the pending murder case against van Dyke that has just begun and will be making its away through the Illinois court system over at least the coming year. Federal charges against van Dyke may well be announced at some point in the future, of course, but typically the case is that the Federal prosecutors will defer formally pursuing those charges until after state court proceedings are completed. It’s also possible that we’ll see Federal charges in connection with another controversial case involving a member of the Chicago Police Department. In that case, involving the 2014 death of an African-American man named Ronald Johnson, in which yesterday the Cook County prosecutor announced that there would not be charges brought against any of the officers involved due to the fact that the prosecutor believed that Johnson indeed had been engaged in a firefight with police prior to being shot. That decision is proving to be controversial and could lead to another independent Federal investigation.

The investigation that Lynch announced yesterday is more akin to the widespread investigations that we’ve seen in recent years of the Police Department in Ferguson, Missouri, and investigation opened in the wake of the Michael Brown shooting in August 2014 that resulted in a report that found widespread racial bias in the department. In other cases, the department also has an ongoing investigation into the practices of the Baltimore Police Department that was opened in the wake of the death of Freddie Gray in police custody, an event that resulted in rioting in the city earlier this year along with the arrest of six Baltimore Police Officers involved in the incident, one of which is currently undergoing the first of what is likely to be many trials in that city. Not long after the Baltimore investigation was launched, the Justice Department reached an agreement with the City of Cleveland, Ohio regarding an investigation into racial bias in the operation of that city’s police force.

The Chicago investigation will be similar to these other investigations in that it will be a broad look at the operation of the Chicago P.D. and the extent to which it may be engaging in policies that have a disparate racial impact in violation of civil rights laws. The difference between those investigations and this one, of course, is that the Chicago Police Department is much larger than any of the others the Justice Departments Civil Rights Division has investigated to date. This means that any investigation is likely to take some time and may or may not be completed by the time the Obama Administration leaves office, although there will likely be a desire to get it done before then. Once it is completed, the next step is likely to depend on how cooperative the department and the city are willing to be. If they are cooperative, then the Justice Department and the city are likely to work out the details of reforms and a monitoring program that would place Justice Department representatives inside the Department to monitor compliance with a Consent Decree that the parties would enter into regarding future operations. If the Chicago Police and the city are not cooperative, then the Justice Department would be required to seek judicial relief that could result in the entry of a decree that would subject the department to monitoring supervised by a Federal Judge. In either case, it’s likely that this investigation could have long term political implications in Chicago, and potentially nationwide as pressure grows in other cities regarding allegations of racially-biased policing and police abuse that have been made for years but which are only now starting to get attention.

FILED UNDER: Crime, Law and the Courts, Police, Race and Politics, US Politics