Republican problems among Latino voters could have an influence on several close races this year. 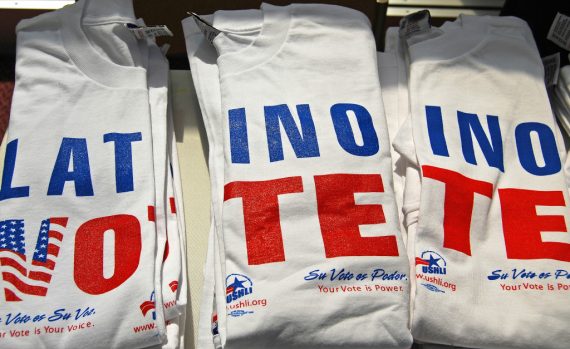 Latino Decisions is out with several polls that show some interesting, and for Mitt Romney potentially dangerous, things about the impact of the Latino vote at the state level. First up, there’s Arizona where the split between the President and Romney mirrors that for the nation as a whole:

New polling data out of Arizona released by America’s Voice and Latino Decisions suggests Arizona may be much closer than the polling averages indicate.  A full 80% of Latinos say they plan to vote for Obama, compared to just 14% for Romney, and Latino enthusiasm is much, much higher in Arizona than the national average.  In Latino Decisions national tracking poll 34% of Latinos say they are more excited about voting in 2012 while 36% say they were more excited back in 2008.  In Arizona 60% are more enthusiastic in 2012 compared to just 16% who were more enthused in 2008.  In October and November 2010 Latino Decisions polling in Nevada was picking up similar trends in Nevada, leading then Washington Post columnist Edward Schumacher-Matos to note on Election Day before the polls closed: “As the Western returns come in tonight, look out for the possibility of a Latino surprise.  For the Democrats, a high Latino turnout could possibly save Harry Reid in Nevada.”

If Latino turnout is high in Arizona this year, it will be the Nevada of 2012 that takes the mainstream media by surprise.

And immigration is a big deal:

The issue with the Latino vote, of course, has always been the question of turnout. On average, Latinos tend to turnout at a lower rate than other groups, which may tend to undercut any advantage Obama has among this group. For example, Mitt Romney currently has a comfortable lead in the polling in Arizona despite his weak numbers among a group that constitutes nearly 30% of the state’s population. The Senate race is a lot closer, though, and we may see the Hispanic vote play a role there in what is an open race to fill the seat being vacated by the retiring Jon Kyl.

Another state where the Latino vote could have an impact in Nevada, where a recent Latino Decisions poll [PDF] showed the President leading among Latinos 78% to 17% and the Democratic Senate candidate Shelly Berkley leading Senator Dean Heller 58% to 26%.  On the Presidential side, Nevada is a true swing state, with the race essentially tied at the moment although President Obama has shown a slight lead in some polls. On the Senate side, Heller has maintained a slight lead outside the margin of error but this race is still to close to call. In a state where nearly 27% of the population is Latino, Obama’s advantage among this voting group here could play a significant role in deciding where the state’s six Electoral Votes go, and further complicate Romney’s available paths to victory.

The situation is somewhat different in Florida, thanks in large part to that state’s large Cuban population. Because that particular group tends to vote Republican, a recent Latino Decisions poll [PDF] has Obama’s lead among Latinos at 61% to 31%, the highest percentage of the Latino vote I’ve seen Romney get anywhere. In the Senate race between Bill Nelson and Connie Mack IV, it’s Nelson 53% Mack 32% leaving a large group of 15% undecided. The Presidential race in Florida is, as it has always been, very close and it’s arguably the Latino vote that’s helping Obama here. In the Senate race, Nelson has had a comfortable lead for weeks now so it’s not clear that the Latino vote is playing quite as big a role as it may be on the Presidential race.

On top of all of this, we have the latest iteration of Latino Decision’s Weekly Tracking Poll of Latino voters [PDF] in which Obama is leading Romney by an astounding 70% to 27%.

It should be noted at all of these polls have somewhat higher margins of error than we’re used to seeing. For the national tracking poll it’s 5.6% and for the state polls it’s an average of about 4.9%. The main reason for this, of course, is that you’re polling a much smaller sample of the population than you would for a regular poll. For that reason, as I noted back in April, polls among demographic subgroups should be viewed with caution. Nonetheless, we’ve got enough evidence now of the Republican’s problems with Latino voters that I feel confident in saying that they are going to lose this group by a far wider margin than they did in 2008, and that it may well end up having an impact on the Presidential race in states like Nevada and Florida, as well as Senate races in Arizona and Nevada. For that reason alone, one would think that the GOP would begin to seriously rethink its position on immigration issues unless it wants to wake up one day and find that formerly solid red states like Florida are now drifting into the Democratic fold.