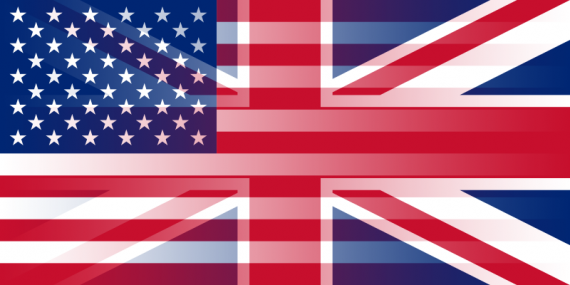 Last week, I noted that the British seemed to be taking the reaction of the Obama Administration, and Americans in general, quite personally, and perceiving it as an attack on Britain as a whole. Well, if their reaction to yesterday’s meeting between White House officials and BP Executives is any indication, the sentiment has not disapated.

The Daily Mail, for example, accuses the Obama Administration of bullying BP and forcing British pensioners to pay for the oil cleanup:

The crisis engulfing BP has plumbed new depths as President Obama bullied the company into depositing £13.5billion into a fund to settle compensation claims for the calamitous Gulf of Mexico oil spill.

After a face-to-face showdown with the President at the White House, BP chairman Carl-Henric Svanberg revealed the payment meant the oil giant would be forced to suspend dividends to its shareholders until at least next year

BP shares rallied more than 8 per cent today as the news helped remove some of the uncertainty hanging over the stock following the oil rig disaster in the Gulf of Mexico.

Shares rose 27.8p to 364.8p as analysts said the moves should cool the political heat on BP and provide a degree of comfort to markets.

And the news was a major blow for Britain’s pension funds, which rely on BP’s dividend income to provide £1 in every £6 they receive each year.

Since the fatal explosion in April, the value of the company – formerly Britain’s biggest – has halved to £63billion.

Yesterday’s dramatic capitulation came as U.S. officials and lawmakers escalated the ugly rhetoric over the disaster.

Vietnamese-born Congressman Joseph Cao went so far as to suggest that the only honourable way for BP bosses to atone for the environmental crisis was to commit suicide.

‘In the Asian culture we do things differently,’ he said. ‘During the samurai days, we’d just give you a knife and ask you to commit hara-kiri.’

Yesterday’s four-hour meeting ended with the company capitulating to Mr Obama’s rescue-fund ultimatum and offering an apology to the American people.

Mr Svanberg and Mr Hayward were told that either they agreed to set up the multi-billion pound escrow account – or the Americans would rush through laws to force them.

Announcing the freeze on dividends, Mr Svanberg tried to smooth over troubled waters, saying BP and the U.S. government were ‘fully aligned’ in handling the crisis.

He said: ‘We made it clear to the President that words are not enough. We understand that we will and we should be judged by our actions.’

The Telepgraph, meanwhile, described what it calls the Prime Minister’s “confrontation” of Obama over his comments about BP:

David Cameron has made an appeal on behalf of BP’s British investors as it was forced to suspend dividend payments over its US oil spill.

he Prime Minister called for the company to be protected from excessive compensation claims as President Barack Obama made it agree to potentially unlimited damages.

BP provisionally agreed the biggest compensation payment in corporate history, setting up a fund worth at least £13.5 billion to cover the damage caused by its leaking oil pipe in the Gulf of Mexico.

On Wednesday, in his strongest show of support since the oil began leaking two months ago, Mr Cameron said the company should not be exposed to a string of future damages claims.

“It’s important to try to give some level of clarity and certainty so that the company can actually continue and be financially stable,” he said.

“They do need a level of certainty, and this is BP’s worry, that there won’t be claims entertained that are three or four times removed from the oil spill. This shouldn’t be about going after BP for the sake of it.”

And, finally, the Guardian is not at all amused by a new advertising campaign that New Orleans will begin running tomorrow:

The B in BP may no longer mean British, but tell that to New Orleans. The city is using a $5m cheque from the company to launch what might be seen as only a slightly tongue-in-cheek anti-British campaign, aimed at luring tourists who might be discouraged by the approaching oil spill.

New Orleans is using BP’s money to launch a series of television and newspaper advertisements across the US on Friday, including one that declares: “This isn’t the first time New Orleans has survived the British.”

The slogan is set against a statue of General Andrew Jackson, who repelled a British assault on New Orleans back in 1814.

But it says in the small print that “right now everyone is welcome, especially our friends from England”. (In the US, the terms British and English are often regarded as interchangeable even when it comes to the World Cup.)

The advertising campaign is the brainchild of the New Orleans Convention and Visitors Bureau, which fears a sharp reduction in tourism and gatherings of other kinds, just as business was picking up after the devastation of Hurricane Katrina in 2005.

The television campaign will launch tomorrow, but the previews of the print campaign are already available: 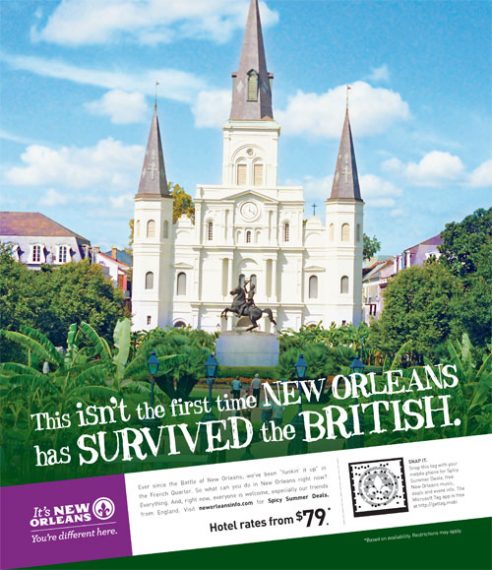 A fairly innocuous tourism ad, but I guess I can see how the Brits might be a little peeved, especially since BP is paying for it.

It’s probably too much to say that the Gulf Oil Spill itself will have a long-term impact on US-British relations, but, at least from the British point of view, it seems to be indicative of a change in attitude in the U.S. Government toward the United Kingdom. Personally, I think they need to calm down a little bit.