Five months after Charleston, Mississippi is still struggling to rid itself of symbols of the Confederacy. 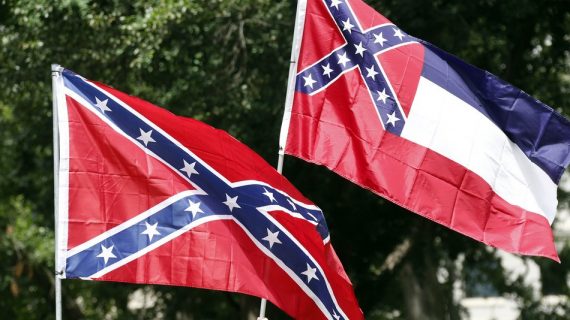 It’s been several months now since the shootings at Emanuel A.M.E. Church in Charlston, South Carolina led to a debate over the Confederate flag that led the State of South Carolina to remove it from public grounds at the State Capitol in Columbia as well as moves by private retailers and other states to remove Confederate symbols from public spaces. One of the more prominent places where the debate rages on, though, is Mississippi, where the Confederate flag remains part of the state flag as well a part of the culture of the state:

LOUISVILLE, Miss. — In single strokes after the massacre of nine black churchgoers in Charleston in June, Confederate battle flags were taken from statehouse grounds in South Carolina and Alabama, pulled from shelves at major retailers like Walmart and declared unwelcome, if to limited effect, at Nascar races.

What happened so swiftly elsewhere is not so simple in Mississippi. The Confederate battle flag is not simply flying in one hotly disputed spot at the State Capitol but occupying the upper left corner of the state flag, which has been flying since 1894. And as recently as 2001, Mississippians voted by a nearly two-to-one ratio to keep it. Recent polling suggests the majority have not changed their minds.

“My flag’s been flying for 33 years, and I’m not about to take it down,” said Nancy Jenkins, 58, a postal worker who is white and who flies the Mississippi flag and the United States flag at her house a block south of Louisville City Hall. “It doesn’t stand for hate. It means a lot of people fought and died.”

Over the past few months, there have been scattered outbreaks of municipal defiance by those who find the Confederate flag offensive, as mayors and city councils from the Delta to the Pine Belt have decided to no longer fly the state flag.

But beyond these sporadic gestures, any organized effort was always going to wait until politicians were on the safe side of this year’s election. With the closing of the polls on Tuesday night, what could turn out to be the last battle over the Confederate flag in Mississippi has begun in earnest.

“It’s all about momentum,” said Dane Waters, the head of Tipping Point strategies, a communications and advocacy firm. “If you take a pocket here and pocket there of things happening, I don’t think anything is going to change.”

This week, Mr. Waters, a self-described conservative who has been retained by a group of people he declined to name, will arrive in Mississippi to pick up a difficult task: forming an unlikely and perhaps unmanageable alliance of preachers, business executives, state boosters and civil rights advocates to remove forever the Confederate battle flag from the state flag.

He is working with the Flag for All Mississippians Coalition, which was started by Sharon Brown, an activist in Jackson, who is black. The campaign has already been organizing supporters and held a hundreds-strong rally at the State Capitol. But Mr. Waters spoke of other tools that will be brought to bear outside the public eye, such as pressure on political donors and lobbying in the Legislature.

The coalition that he and others are trying to put together would need to unite groups almost never politically aligned, testing the depth of what Mr. Waters called the state’s “tremendous social, economic and racial divide.”

In the immediate aftermath of Charleston, it seemed that such a coalition might be possible here. Several conservative political leaders called for a change, including the state’s two United States senators and the speaker of the Mississippi House (inspiring critics to print “Keep the Flag, Change the Speaker” yard signs). Down came flags at city buildings in Grenada, Magnolia, Starkville, Clarksdale and Yazoo City. In October, even the University of Mississippi lowered the flag at the circle where segregationists once clashed with federal troops over the admission of James Meredith.

But the move to change the flag, which, in the words of the daughter of the state senator who designed it, was intended to “perpetuate in a legal and lasting way that dear battle flag under which so many of our people had so gloriously fought,” is not widely popular. It takes no time at all in any Mississippi downtown to find that out.

Partisanship in Mississippi has become ever more racially polarized, and there are few topics on which racial division has been more explicit. In the 2001 referendum, according to the book “Mississippi Politics: The Struggle for Power, 1976-2008,” 90 percent of whites voted to keep the flag as it is. Among blacks, 95 percent voted for a new design, which replaced the cross with a circle of white stars.

“Don’t try to force me as a black man who knows his history to honor something that goes against my heritage,” said Robert Brown, a 42-year-old barber in Louisville, a small town in the central Mississippi pines with a population that is about 60 percent black.

Passions run so high regarding this issue in the Magnolia State, that one man is charged with bombing a Wal-Mart over that chains decision to stop selling Confederate flags:

A man who has been called a longtime supporter of the Mississippi state flag — and the controversial symbol within it — is accused of bombing a Wal-Mart in that state because the retail giant stopped selling the Confederate battle flag, police said.

Marshall E. Leonard, 61, from Tupelo, Miss., was arrested and is set to be charged on Tuesday with detonating an explosive after he threw an explosive device into a Wal-Mart on Sunday morning, Tupelo Police Chief Bart Aguirre told The Washington Post. The device made a loud noise but did no real damage to the store.

“He’s a strong supporter of keeping that flag flying,” Aguirre told the Associated Press. “This is his way of bringing attention to that.”

It’s not surprising that this is happening in Mississippi, of course. Notwithstanding the fact that the debate that swept the south in the wake of the Charleston shootings saw a renewal of the effort to remove the Confederate flag from the state flag that earned the support of one of the most powerful politicians in the state, it was readily apparent that Mississippians as a whole were not nearly as open to the idea of putting the past behind them as people in other parts of the south. It wasn’t that long ago, after all, that a statewide referendum was held on the issue and voters overwhelmingly approved keeping the flag as it stands today.  The racial division in that referendum between the state’s African-American and white residents was, of course, as deep as you expected it would be, but the support among white Mississippians was in that referendum, and apparently remains if the events in the state since the summer’s controversy are to be believed, was quite bipartisan. If nothing else, this would seem to indicate that it’s unlikely that we will see the kind of bipartisan agreement to remove the Confederate flag that we saw in South Carolina in the wake of the Charleston shootings. Instead, we will see measures like the decision of the University of Southern Mississippi to remove the state flag from campus grounds until it is changed, although it’s unclear if we’ll see similar steps at the University of Mississippi or Mississippi State University, both of which seem to be far more traditionally “Mississippi” in many respects.

The reality, of course, is that the debate that occurred in South Carolina in the wake of Dylann Roof’s racially motivated murders in a church closely tied to both the struggle against slavery and the Civil Rights Movement is one that needs to occur throughout the south, and perhaps nowhere more than in Mississippi which was a focal point of both the worst aspect of the Confederacy and the resistance to the end of Jim Crow. Whatever those nostalgic for the history of the Civil War might tr to say, it is obvious that the Confederate Battle Flag long ago became a symbol of hatred and resistance to racial equality rather than some remembrance of heritage. In some sense, the debate over this issue was settled in the wake of the war, when Robert E. Lee himself, who became President of what is now Washington & Lee University in Virginia argued that the flag should not be displayed in public  and left instructions that no such flags were to be displayed at his funeral or his grave after he died. Indeed, it wasn’t until the resurrection of the Ku Klux Klan in the 1920s and then most especially the Civil Rights Movement in the 1950s that the flag seems to have become a public symbol again. After Brown v. Board of Education and similar decisions from the Supreme Court, and the efforts of the Eisenhower Administration and subsequent Presidents to enforce Federal laws protecting the rights of African-Americans, many states in the South began flying the flag and integrating it into their state symbols in what was obviously an attempt to foster resistance to Washington and an effort to intimidate the African-American residents of their respective states. As the years went by, many states began to abandon those symbols, but it was Charleston that really brought home the point that it was time to abandon the flag as anything other than a museum piece, which is the step that South Carolina has taken. Mississippi should take a cue from its fellow Southern state and enter the 21st Century already.