The Tea Party may be the most vocal wing of the GOP but most Republicans seems to favor candidates that aren't quite so right wing. 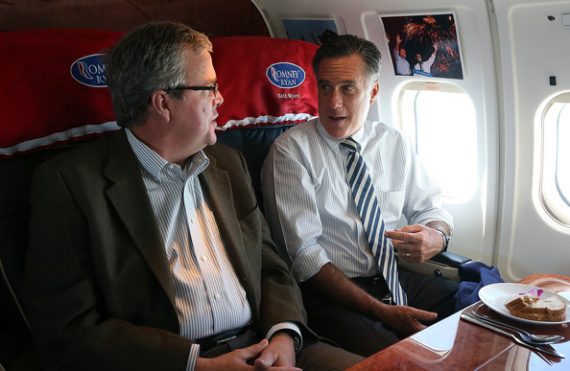 If you follow the commentary of conservatives in the blogosphere and on social media, the idea of another Mitt Romney run for the White House is pretty much the worst idea ever, a sentiment which is consistent with the revised history of recent American politics that one hears from this segment of the world of punditry. Notwithstanding the fact that in 2008 Romney was seen as the conservative alternative to eventual nominee Senator John McCain, by the time 2012 rolled around the former Massachusetts Governor came to be seen during the 2012 cycle as the supposed moderate, with some even labeling the man who was cheered at CPAC in 2008 even as he announced he was dropping out of the race as a “Republican In Name Only” due to his association with a health care reform plan that many saw as being the impetus for the Affordable Care Act. After Romney lost the General Election in 2012, the standard claim on the right blamed his loss on the fact that, once again, the GOP had not nominated someone who has “conservative enough” and that this caused conservative voters to stay home. The fact that the 2012 Republican General Election campaign was indeed quite conservative when it came to the economic and other messages that the Romney campaign put forward were actually quite conservative, and that there is no evidence at all to support the assertion that Romney lost due to conservatives “staying home.”1

With the recent news that Mitt Romney was considering running for President again, these critics have come out of the woodwork again to loudly proclaim that they will not support him. Interestingly, though, many of their fellow Republicans clearly don’t feel the same way:

Fifty-nine percent of Republicans would like to see Romney jump into the 2016 race, while only 26 percent believe he should stay out, according to the CBS News poll.

Fifty percent of Republicans would like to see former Florida Gov. Jeb Bush on the campaign trail as well, while 27 percent disagree. If both Romney and Bush run, analysts expect them to wage a competitive battle for the allegiance of the Republican establishment.

Former Arkansas Gov. Mike Huckabee posts a respectable showing, with 40 percent of Republicans urging him to get in, and 29 percent urging him to stay out.

A trio of Republican senators who have stoked the enthusiasm of the grassroots have mixed numbers. Twenty-seven percent of Republicans would like Kentucky Sen. Rand Paul to mount a bid, but 34 percent disagree. Twenty-six percent would like Florida Sen. Marco Rubio to run, while 19 percent would not. Twenty-one percent want Texas Sen. Ted Cruz to run, while 25 percent want him to not run.

What’s most interesting about these numbers, of course, is the fact that so-called “establishment” candidates like Romney and Bush are doing far better in the polls right now than maverick candidates such as Ben Carson, Ted Cruz, or Rand Paul. To some degree, of course, the response to this poll can be attributed to name recognition and the fact that many of the potential candidates for President are still largely unknown to people who don’t follow politics closely. Still, it’s worthwhile to note what we’re seeing here, which is the fact that the top two candidates in the poll of self-identify Republicans are the so-called “establishment” candidates rather than the maverick conservatives. This runs counter to the arguments of people who are part of that base who claim, on a regular basis, that “the American people” are yearning for a hard right conservative in the mold of Ronald Reagan, not the Ronald Reagan who was actually President, mind you, but the myth that conservatives have created of a Ronald Reagan who governed to the hard right, never compromised, and provided the GOP with all it needs to know about how to win elections and govern, even in an era of divided government. Those candidates are far down the list of candidates that self-identified Republicans would like to see run in 2016, just as they were in 2012, 2008, and 2000.

While this is likely to be disappointing to the right wing base of the GOP, it should not be too much of a surprise.  Looking back through recent history, the Republican Party typically doesn’t end up nominating “maverick” candidates in the sense of picking the candidate that appeals most to the base. Instead, they have usually picked the candidate that arguably comes closest to appealing to the middle of American politics. In the era before primaries controlled the process, of course, this was largely due to the influence of party bosses and insiders in picking the nominees, but if anything the primary system has made the likelihood that the eventual GOP nominee will come from the “establishment” even more likely. For one thing, the fact that most Republican Presidential Primaries are open primaries means that voters who are generally politically independent are able to vote, and they are generally more likely to vote for more “middle of the road” candidates. This is how candidates like John McCain and Mitt Romney were able to hold off challenges from the right and win the nomination, and it’s likely to have a similar impact on the race in 2016 as well. Combine that with the role of money in politics, and the fact that big money Republican donors are more likely to back traditional conservatives than mavericks like Cruz, Paul, or Santorum, and it seems pretty clear that, despite the rise of the Tea Party, the GOP nomination process remains inclined to pick a candidate closer to the middle of American politics. Absent some drastic change, there’s no reason to believe that this won’t remain the case in 2016. Right now, that suggests that either Bush or, if he runs, Romney, would be the most likely person to be the nominee, but it could also mean that the nomination could go to one of the lesser known Governors that might get into the race. It also means that those hoping for a Ted Cruz or Rand Paul at the top of the Republican ticket next year are likely to be disappointed.

1 Indeed, Mitt Romney received more raw votes in 2012 than John McCain did in 2008 even though overall turnout in 2012 was lower.