More on the Incident in the South China Sea (Updated) There have been further developments in the incident that took place in the South China Sea I posted on yesterday. China and the U. S. have filed conflicting complaints over the matter:

BEIJING (Reuters) — China said on Tuesday that a U.S. Navy ship involved in a confrontation with its fleet off the southern island of Hainan had violated international and Chinese laws.

Washington had urged China to observe international maritime rules after the Pentagon said five Chinese ships, including a naval vessel, harassed the USNS Impeccable in international waters on Sunday.

“The U.S. claims are gravely in contravention of the facts and confuse black and white and they are totally unacceptable to China,” Chinese Foreign Ministry spokesman Ma Zhaoxu told a regular news briefing.

But the confrontation was unlikely to do lasting damage to ties between two countries as they combat the global economic slump, a Chinese analyst in Beijing said.

Global oil prices rose 3 percent on Monday and held above $47 a barrel on Tuesday, partly on jitters about tension between the world’s top oil consumers.

Denny Roy, a U.S.-based expert on Asia-Pacific security, said the confrontation did not appear accidental, and was rather China’s way of sending a message to Washington that it wanted respect for its growing military reach in the region.

“I don’t think this happened spontaneously,” said Roy, of the East-West Center in Honolulu, Hawaii, “No doubt it had the endorsement of central leaders in Beijing.”

I think there’s another alternative. It may be the case that the Chinese authorities are supporting a handful of over-zealous captains as a face-saving measure.

Is there an expert on maritime law in the house? As I read the relevant conventions I suspect that the U. S. is correct in this matter but I’m open to arguments that the Chinese may be in the right. What are a country’s rights in its Exclusive Economic Zone? I interpret the convention as giving the possessing country sovereignty over the resources in the region without granting it the control it has over its territorial waters. The Chinese may see it differently.

As you can see from the map above the South China Sea is a highly contentious region with at least four nations having conflicting claims over EEZ’s.

BEIJING — Chinese fishermen nearly made off with some of the US Navy’s most modern and secret submarine tracking equipment, it seems, in a South China Sea incident Sunday that is making diplomatic waves.

Unarmed American seamen on the USNS Impeccable were reduced to turning their firehoses on five Chinese military and fishing vessels — one of which approached to within 25 feet before the US ship withdrew, according to the US Navy account.

There is little doubt what the Impeccable was doing 75 miles off the coast of the island of Hainan, where the Chinese have built a major submarine base. It is one of only four US ships worldwide equipped with the latest generation of sub-hunting sonar, known as SURTASS LFA (which stands for Surveillance Towed Array Sensor System – Low Frequency Active, in case you were wondering.)

At one point during the incident, “the Chinese used poles in an attempt to snag the Impeccable’s towed acoustic array sonars,” reported the US Navy’s press service, quoting Pentagon spokesman Bryan Whitman.

Had they succeeded, it would have been embarrassing, to say the least. In a 2007 environmental impact statement, the Navy described LFA as “the only available technology capable of meeting the US need to improve detection of quieter and hard-to-find foreign submarines at long range.”

With Hainan not far from Taiwan, the island-state that China claims and the US has pledged to defend against any attack, this is sensitive technology. The aircraft carrier USS Kitty Hawk was discomfited a couple of years ago when it was on maneuvers and a Chinese submarine surfaced a few hundred yards off its bow. None of the flagship’s carrier-strike group had spotted the intruder.

That certainly casts a little light on the situation. 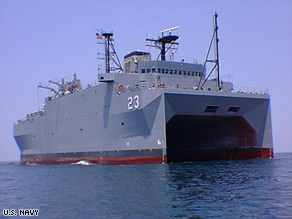