President Obama continues to maintain a lead in the crucial battleground state of Virginia according to the latest poll from Public Policy Polling:

PPP’s newest poll of Virginia finds Barack Obama leading by 5 points, 50-45. In 8 Virginia surveys PPP has done this cycle, Obama has never led Mitt Romney by less than 4 points. It continues to look like it could be his firewall state this fall.

Obama’s continued success in the state is very much a product of its rapidly changing population. Among voters who have lived in Virginia for less than 20 years Obama leads Romney 62-32. When you narrow it to folks who have come to the state in the last ten years his advantage expands even further to 67-29. Romney leads 51-45 with folks who have been in Virginia for more than 20 years and they make up 68% of the electorate, but the transplants are so heavily Democratic that he leads the state overall.

One effect the newer voters are having on the Virginia electorate is to make it more racially diverse. Obama trails 56-40 with white voters, but with non-whites he’s ahead 75-19

The President is down slightly from the last PPP poll, where he led by eight points, but it’s still outside the margin of error. The fact that Obama leads among voters who have been in the Old Dominion 20 years or less isn’t entirely surprising since is rather apparent that many of those transplants have come from parts of the country that are more favorable to Democrats. The one crosstab that’s missing from this poll that would have been interesting to see is a breakdown by location, specifically to see how the two candidates are doing in the population-rich areas of Northern Virginia and Hampton Roads. However, since most of the transplants have in fact settled in this area, one can reasonable assume that Obama is performing well in both areas, which ought to be of concern to the Romney team.

The RCP Average has the President leading by an average of two points, but there seems to be some indication of an uptick in the President’s favor at the moment: 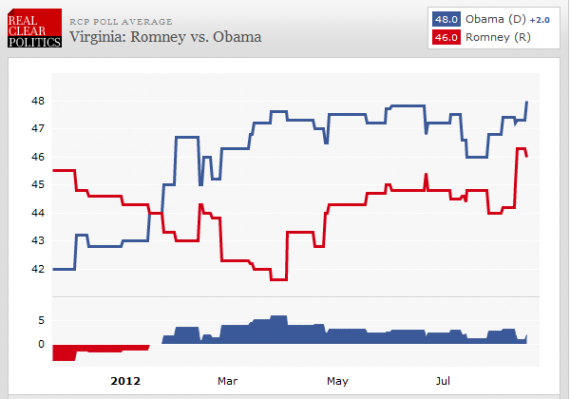 This poll was taken while the Todd Akin story was still evolving, so it’s hard to say how much of an impact that story may have had on respondents. However, one would assume that it’s not the kind of story that would cause independent and suburban female voters to look kindly on the GOP.