Michael Hastings has yet another credulous story attempting to smear the United States military. 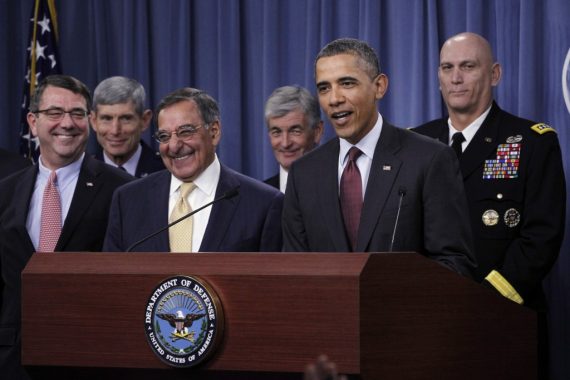 The propagandist Michael Hastings has yet another credulous story attempting to smear the United States military, a Reuters piece titled “Obama’s power grab at the Pentagon.”

Normally, Hastings’ byline is enough to dissuade me from reading a story but the headline succeeded at grabbing my attention. How, I wondered, could the commander-in-chief of the US armed forces engage in a “power grab” over his subordinates?

That President Obama wasn’t really in charge of the Defense Department might come as something of a shock. He is, after all, the commander in chief. But considering the size of the nation’s defense apparatus, it shouldn’t. The Pentagon has become the 51st state—America’s largest bureaucracy, employing three times more people than the population of Vermont and Wyoming combined. Its capital is the Five-Sided Puzzle Palace, as my journalist friends fondly call it, where 23,000 work daily. Its other residents are the 3.2 million military, intelligence and civilian personnel who live inside its borderless confines around the globe. And since the attacks of September 11th, the influence of the Pentagon’s constituency has grown exponentially, its budget increasing from $295 billion to $549 billion, sucking up some 54 percent of federal tax dollars.

First of all, the fact that Hastings’ journalist friends don’t know that the Puzzle Palace is the National Security Agency, not the Pentagon, explains a lot.

Third, we’ve had a massive standing military since, oh, 1941, so this isn’t exactly something novel to the Obama administration.

Yes, its massive bureaucracy has an enormous ability to resist the desires of presidents–including former war hero Dwight Eisenhower–to transform it. It has a strong constituency on Capitol Hill, K Street, and with the American people.

Additionally, the Pentagon’s top leadership answers to both the president and to Congress. The Joint Chiefs, for example, routinely testify and give answers that undermine the policy preferences of presidents of both parties.

Even so, the military does what it’s told at an operational level. They might not like it when a Jimmy Carter or a Bill Clinton or a Barack Obama cancel a pet acquisitions program. They might even fight it in the halls of Congress. But, once they lose, they salute and march on. Similarly, they might not like getting sent off to fight unwinnable national building exercises; they go anyway.

The Pentagon’s unprecedented power and influence turned it into a fierce rival of the White House. And so when President Obama crossed the Potomac last Thursday, he was on a mission to reclaim enemy territory. In an unusual move, he made the budget announcement from within the Pentagon itself. It was something of a triumph that he chose to do it there. Upon arriving in Washington three years ago, Obama had a very different reception from the brass. The building was populated by Republicans. The last three defense secretaries had been with the GOP, and the rank and file were still supporters of the previous administration. They were heavily invested in the Iraq War—a war Obama had called “dumb.” At one of his first meetings in the Pentagon in January 2009, as I recount in my new book The Operators, he met General Stanley McChrystal, who would later confide to his staff that Obama appeared “uncomfortable.” A senior official at the meeting described the president as “intimidated by the crowd.” Months after the meeting, the Pentagon’s leadership would take advantage of this perceived weakness, pushing the president to escalate the war in Afghanistan and tripling the scope of the conflict.

It’s doubtless true that top brass often look at new presidents with disdain. That’s true at State, the non-DoD intelligence services, and other highly specialized bureaucracies, too. They view themselves, not without justification, as subject matter experts and incoming presidents and political appointees as amateurs.

Nor is it a surprise that the staff in place when a new president takes over is highly invested in the policies they’ve been engaged with. That’s especially true in the case of wars, which simply can’t be effectively waged without cultural buy-in. Only psychopaths send people off to die in ventures they consider “stupid.”

And, yet, when the commander-in-chief decided to end the Iraq War on schedule, they left. When Obama–quite rightly, and much too late in my judgment–fired McChrystal, he not only left graciously but almost all of the brass and former military officers alike supported the move.

The tension between the president and his generals reached its climax in June 2010 in the weeks after I published a Rolling Stone story exposing the contempt the military leadership had for their civilian counterparts. The president fired McChrystal and replaced him with General David Petraeus (tying Petraeus to the fate of the doomed mission, an association that Petraeus had wanted to avoid, according to McChrystal). Within the next year, Defense Secretary Robert Gates would retire as well (but not before Obama twice overruled his advice—on Libya and the Bin Laden raid) and was replaced by Democratic ally Leon Panetta. Petraeus came home from Kabul in June 2011, and was quickly defrocked and installed at the CIA (preventing the popular general’s potential and oft-rumored run for the presidency, another outcome the White House wanted to avoid). When Petraeus pushed to move troops to eastern Afghanistan, rather than bringing them home, Obama overruled him, prompting General John Allen (the man there now) to admit the president was no longer following the military’s advice. Either by accident or by design, the young president had neutered his formidable opposition. The celebrity generals were gone, a friendly Defense Secretary was in and a string of what were perceived as foreign policy successes had been accomplished.

Here, Hastings unwittingly undermines his entire case. McChrystal was fired before the Rolling Stone article actually hit the streets, with the decision made once a digital copy leaked to the blogs. Gates–who was still Secretary only because Obama reappointed him–was popular and powerful and yet twice overruled on major decisions. Petraeus was arguably the most powerful American general since Douglas MacArthur and yet Obama overruled him without consequence.

If Petraeus wanted to run for president, he’d have by God run for president. By all accounts, he asked for the CIA job and was eager to serve. Would he have rather been Army Chief of Staff or Chairman of the Joint Chiefs? Probably. But he could have resigned in protest when Obama overruled him on Afghanistan, created a massive stink for the president, and rode the wave to the Republican nomination. That he didn’t speaks to either Petraeus’ professional ethic, his lack of interest in the presidency, or something else known only to him. It sure as hell isn’t because Obama outmaneuvered him.

There were other signs of the president’s new confidence. Tucked into Obama’s defense strategy—which he unveiled the same day as the cuts-was another not-so-subtle rebuke of the military’s much beloved counterinsurgency doctrine, which accounted for much of the $1.2 trillion poured into Iraq and Afghanistan. The new defense strategy called for “limited counterinsurgency”—a concept akin to being “slightly pregnant,” as Wired‘s Spencer Ackerman observed. Keeping a reduced counterinsurgency initiative was a sop to the brass who had built their careers on the past decade of war, but not a convincing one.

Dude: The military brass hates, hates, hates, hates counterinsurgency. Some of them–most notably Petraeus–embraced it over the past decade because they were tasked by successive commanders in chief with putting down insurgencies in Iraq and Afghanistan. Counterinsurgency, as the name implies, is the best means of completing that mission.

I guarandamntee you that the Pentagon brass didn’t have to be talked into shifting away from the kind of fights that they’ve hated going back to Vietnam–indeed, they unlearned how to fight counterinsurgencies most Ricki-Tick after Vietnam–and refocus on the high end of the spectrum of conflict. They love preparing for that kind of war!

Now that the White House has the political power to control its military moves, the question is: Can the administration pull it off in 2012 and beyond? The Pentagon and the president may want to keep the focus on China over the next decade, but there’s going to be serious pressure to get drawn back into other misadventures in the Middle East and Central Asia.

The United States military never has and never will decide which wars it fights. To be sure, they’ll push very hard to man, equip, and train for the kinds of wars it would prefer to fight. But the president gets to decide where to fight, when to fight, why to fight, and how to fight. (Technically, Congress has some say over that as well. Operationally, it’s limited.) The brass might try to talk presidents out of fighting dumb wars; they’re usually unsuccessful.

It wasn’t the Pentagon that decided to engage in an air war over Libya. Indeed, the top intelligence and military leadership argued vociferously against it. The guy in the White House overruled them and–guess what?–they went.