Barack Obama has significantly widened his predecessor's global war on terrorism, even if he's no longer calling it that. 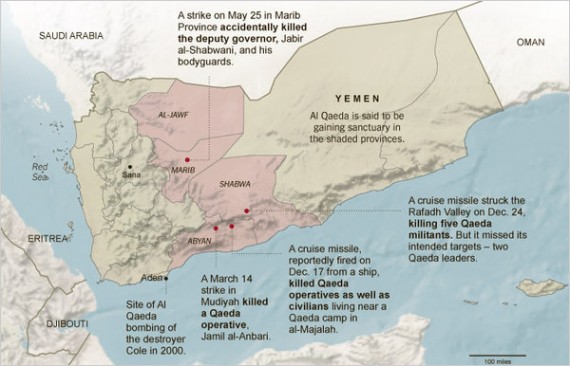 Whatever his preferences as a candidate, Barack Obama has significantly widened his predecessor’s global war on terrorism, even if he’s no longer calling it that.

Scott Shane, Mark Mazzetti, and Robert Worth for the NYT (“Secret Assault on Terrorism Widens on Two Continents“):

The [May 25] attack [in Yemen’s Marib Province] offered a glimpse of the Obama administration’s shadow war against Al Qaeda and its allies. In roughly a dozen countries — from the deserts of North Africa, to the mountains of Pakistan, to former Soviet republics crippled by ethnic and religious strife — the United States has significantly increased military and intelligence operations, pursuing the enemy using robotic drones and commando teams, paying contractors to spy and training local operatives to chase terrorists.

The White House has intensified the Central Intelligence Agency’s drone missile campaign in Pakistan, approved raids against Qaeda operatives in Somalia and launched clandestine operations from Kenya. The administration has worked with European allies to dismantle terrorist groups in North Africa, efforts that include a recent French strike in Algeria. And the Pentagon tapped a network of private contractors to gather intelligence about things like militant hide-outs in Pakistan and the location of an American soldier currently in Taliban hands.

While the stealth war began in the Bush administration, it has expanded under President Obama, who rose to prominence in part for his early opposition to the invasion of Iraq. Virtually none of the newly aggressive steps undertaken by the United States government have been publicly acknowledged. In contrast with the troop buildup in Afghanistan, which came after months of robust debate, for example, the American military campaign in Yemen began without notice in December and has never been officially confirmed.

Obama administration officials point to the benefits of bringing the fight against Al Qaeda and other militants into the shadows. Afghanistan and Iraq, they said, have sobered American politicians and voters about the staggering costs of big wars that topple governments, require years of occupation and can be a catalyst for further radicalization throughout the Muslim world.

Instead of “the hammer,” in the words of John O. Brennan, President Obama’s top counterterrorism adviser, America will rely on the “scalpel.” In a speech in May, Mr. Brennan, an architect of the White House strategy, used this analogy while pledging a “multigenerational” campaign against Al Qaeda and its extremist affiliates.

The administration’s demands have accelerated a transformation of the C.I.A. into a paramilitary organization as much as a spying agency, which some critics worry could lower the threshold for future quasi-military operations. In Pakistan’s mountains, the agency had broadened its drone campaign beyond selective strikes against Qaeda leaders and now regularly obliterates suspected enemy compounds and logistics convoys, just as the military would grind down an enemy force.

For its part, the Pentagon is becoming more like the C.I.A. Across the Middle East and elsewhere, Special Operations troops under secret “Execute Orders” have conducted spying missions that were once the preserve of civilian intelligence agencies. With code names like Eager Pawn and Indigo Spade, such programs typically operate with even less transparency and Congressional oversight than traditional covert actions by the C.I.A.

And, as American counterterrorism operations spread beyond war zones into territory hostile to the military, private contractors have taken on a prominent role, raising concerns that the United States has outsourced some of its most important missions to a sometimes unaccountable private army.

The article goes on for four pages but that gives you a sense of the scope of what’s going on.

None of this is by any means shocking, unless you believed that Obama was a secret pacifist who wanted to end the war on Islamic extremists.   Instead, we’ve seen what we virtually always see:  A continuity, with only nuanced differences, in America’s foreign and national security policies with a transition in administrations.    Whatever their predilections as civilians, those who assume the presidency are thrust into the same role, get advice from the same bureaucracies, and face the same global realities.

As Steve Hynd pointed out on Twitter yesterday, more Americans have died in Afghanistan under Obama’s short watch than during the entirety of the Bush Administration.    That was an inevitable and foreseeable consequence of the so-called Afghan Surge, which took the war from a long holding action to an aggressive counterinsurgency operation.   But, given that the Iraq drawdown was already underway, we may well have seen the same thing under a third Bush term or a first McCain term.

Now, I like the idea of using a scalpel rather than a hammer.  I’m less thrilled about waging a “multigenerational” campaign.   But, again, that seems to be a bipartisan phenomenon in post-Cold War America.