JERUSALEM – Prime Minister Ehud Olmert, crippled by a series of corruption investigations, announced he would resign Sunday, clearing the way for his foreign minister to try to succeed him as Israel’s next leader.

The prime minister’s office said Olmert would submit an official letter of resignation to President Shimon Peres later Sunday, freeing the president to formally tap Livni to try to put together a new government. Weeks ago, Olmert promised to step down after his governing Kadima Party elected a new chief to replace him.

Livni, a rival of Olmert’s, won that race last week by a narrow margin, but that victory did not assure her the premiership. Peres must first assign her the task of trying to cobble together a government, giving her six weeks to forge a coalition. Should she fail, parliamentary elections would be called for early 2009, a year and a half ahead of schedule.

Olmert is expected to stay on as caretaker prime minister until a successor is in place.

Olmert is likely to be succeeded by Tzipi Livni, who was elected the head of Kadima party last Wednesday. Reactions to the resignation are beginning to come in.

But it is foreign and security policy that will dominate the next prime minister’s agenda. Livni must define the path for addressing the Iranian nuclear threat.

In trying for an accommodation with relative moderates among the Palestinians, she needs to articulate how this is an Israeli interest, and needs to talk about the ticking diplomatic and demographic clocks. What does she think will happen when Mahmoud Abbas completes his term as Palestinian Authority president in January?

Livni needs to tell Israelis where the negotiations stand, especially on Jerusalem and refugees. What steps are being taken to ensure that a “shelf agreement” doesn’t come back to bite us should the Islamists take complete control of Palestinian affairs? And what are her – and Israel’s – red lines in the negotiations?

What’s her plan for Gaza, where ever more extreme Hamas factions are solidifying power? How does she propose to keep the West Bank from becoming a launching pad for violence against Israel if the Palestinians get their state?

She will also have the opportunity to take a fresh look at negotiations with Syria; the current approach of indirect talks does not instill confidence.

A well-negotiated agreement with Syria is in Israel’s strategic interest. But does she agree that the extent of any withdrawal from the Golan Heights must parallel the depth of the peace offered? Does she understand that the finer points of an accord, such as access to Israel’s main natural water resource, Lake Kinneret, are critical?

Livni doesn’t boast the storied bio of a Sharon, although her parents were among the founders of Israel. She’s considered a centrist, at least by Israeli political standards. Which means that she’s willing to talk and reach a reasonable compromise with the Palestinians for a two-state solution. That’s important for Israel’s future.

Livni has been the main negotiator for Israel’s government since the Bush administration gathered most of the major players in the Middle East last year for a peace summit at Annapolis, Md. The president optimistically asserted then that a peace deal could be signed by the end of 2008. Olmert has talked of progress, but Livni has been more circumspect. The timeline to achieve a deal is important, she said, but she also reiterated that she’d resist international pressure because “this can lead to clashes, this can lead to misunderstanding, this can lead to violence.”

Livni puts Israel’s safety first. “Security needs to be detailed in every agreement,” she said. “An agreement can’t be reached without agreeing on security issues. Israel can’t permit herself to just throw the keys to the other side and hope for the best.”

Livni has stopped short of such incendiary pronouncements. “We want to make clear that this region is one in which you either beat the neighborhood bully, or you join him. . . . All hesitation creates an image of weakness. Iran needs to understand the threat of a military move exists and is not being taken off the table. The more that this is made clear, the less the need to put this to use, later on. Thus, keeping the military threat on the table is important,” she said.

The imperative for a peace deal remains even if both sides are in despair. Iran looms as a threat if it acquires nuclear-bomb capability. And Iran’s friends — Hezbollah, Hamas, and Syria — are in front-line positions to hurt Israel. The US is also eager for a Palestinian state to eliminate one more excuse for Al Qaeda to recruit terrorists.

Any of Israel’s enemies might be quick to test Livni. She is cut from a different cloth than many past leaders, including the first female prime minister, Golda Meir. She comes from a super-nationalist family, served in the Army and as an intelligence agent, and then worked as a lawyer before entering politics in 1999. She’s most admired for espousing clean politics.

Israel is the U. S.’s closest ally in the Middle East and faces challenges today as formidable as any in its history. With at least one of Israel’s most prominent newspaper columnists clamoring for the bombing of Iran to begin immediately one way or another the decisions of Israel’s next prime minister are likely to affect us all.

Actually, it’s less than two hours until Ehud Olmert ends one of the most disgraceful leaderships of the modern State of Israel. I have no real hopes that Tzipi Livni will be much different, but she’s going to have to work harder to keep that government coalition going, and with any luck, Bibi Netanyahu and Ehud Barak discussed ending the coalition and forcing new elections when they met the other day.

There will have three realistic candidates. Two of those candidates will have been previously voted out of office as diplomatic and/or military failures. The third will have functionally zero relevant experience running a country under diplomatic and/or military siege. In between preemptively signaling land concessions in Israel and abroad, she’s occassionally tried to solve terrorism by supplying Hamas with human shields. Not coincidentally, she’s getting warm words from Assad and Abbas.

A Blog for All

Livni is no panacea for Israel’s woes. She’s just as incompetent as Olmert, and lacks experience to deal with these matters. I hope I’m wrong about that, but her first inclinations while serving in the Olmert government were to engage in the same kinds of appeasement and concessions that Olmert engaged in. Protecting all of Israel’s territory seems secondary to the idea that a peace deal can be reached for a peace deal’s sake.

How has the feckless Livni become the presumptive Prime Minister of Israel? First, the feckless and corrupt Ehud Olmert resigned. Second, Livni managed narrowly to defeat Transportation Minister Shaul Mofaz in a primary. Glick argues that the primary process was rife with voter fraud. Be that as it may, her victory puts Livni in a position where, if she is able to form a government within 42 days, she will be Prime Minister until 2010.

To make matters worse, Mofaz has announced that he is bowing out of the government. This, Hazony explains, is significant because as the former defense minister and IDF chief-of-staff, Mofaz represents Kadima’s greatest claim to security-related credentials.

Under these circumstances, and with everything Israelis have been through, what Israel really needs is an election. But Livni is having none of it. She states, “I am not afraid of elections, and we in Kadima have no reason to worry about elections; they are just unnecessary.” Polls suggest, however, that Livni would hardly be a shoe-in if elections were to be held. 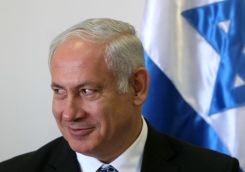 Netanyahu Back as PM?

About that Early Election in Israel…