The How Do I Order Ham and Eggs? Edition OTB Caption ContestTM is now over.

The How Do I Order Ham and Eggs? Edition OTB Caption ContestTM is now over. 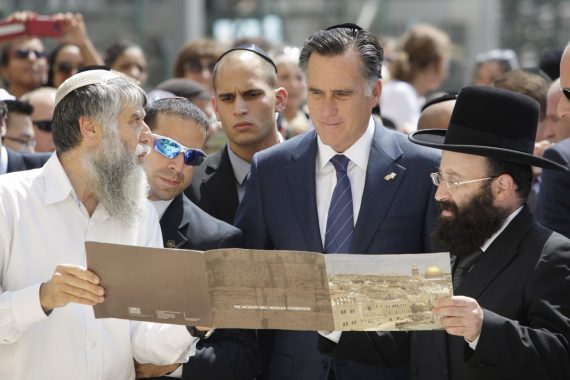 First(tie): black onion – How did you get a copy of my schematics? (The Rominator – rodney)

Second: MstrB – No, we only cut off this part.

KRM – “West Bank, schmesh bank, Mitt! Your a mensch, and I’m tellin’ you -Once these last 2 timeshares go, they ain’t buildin’ no more!”

Mr. Prosser – No, Mr. Romney, let’s go over this again; with the corned beef you have a choice of cole slaw or potato salad. You want soup, that’s an extra side.

Donald sensing – “Mr.Romney, this is where our people used to keep our inscribed golden plates. But they disappeared in 1823. Any idea where they went?”

jd – I still think the camel joke was best.

Robert W. Armijo – Members of the IDF share their plans with Mitt Romney to invade Iran and Dearborn, Michigan.

CSK – “No, really, it’s true, governor. There ARE fifteen commandments.”

I know this plan doesn’t look like much, but for the finale you get to do the big number ‘Always Look On The Bright Side Of Life’ with Eric Idle.

“What? …but the Secret Service said ‘Rosh Katan’ was the perfect code name for me.”

The Monday Contest is ready for round two.