The Pork and Mindy Edition OTB Caption ContestTM is now over.

The Pork and Mindy Edition OTB Caption ContestTM is now over. 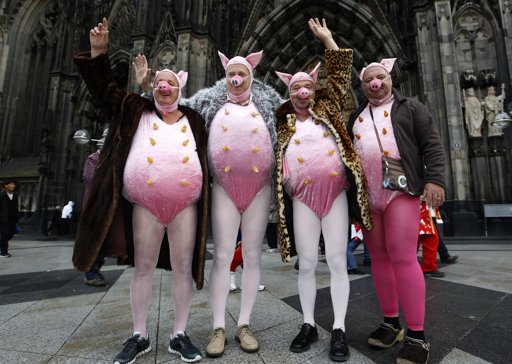 Second: Tillman – “Foolish pigs, I have you now! That cathedral you’ve holed up in is mostly glass! LOOSEN THE BLUE TRIPLE-SHOT BIRD!”

Third: Robert W. Armijo – Unfortunately for the Swine sisters, it was a particularly cold day.

CSK – The sperm costume design for the Provincetown Playhouse’s production of “Everything You Ever Wanted to Know About Sex: The Musical!” lacked the elegant simplicity of the original.

John Burgess – “Okay… election’s over! Which way to the trough, Jack?”

gVORo8 – Following his defeat, Romney had a reunion with his old Bain Capital buddies.

After Nov. 6, the economy, unemployment, Benghazi, and Sandy started to appear in public without lipstick.

Stem Cell treatment recipients have experienced practically no side effects.

The Thursday Contest has already assume the BOHICA position post-election.