The Bogeyman Edition OTB Caption ContestTM is now over.

The Bogeyman Edition OTB Caption ContestTM is now over. 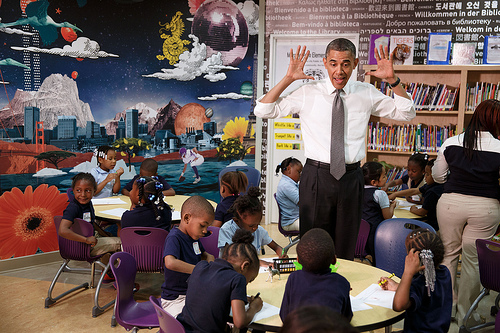 Second: Mu – Secret Service HELP, he made a drawing of an assault rifle!

Third: John Burgess – “And then the great big ObamaCare Bear came out of the woods and…”

Doug Mataconis – “Abracadabra! And your economic future has just disappeared!”

John Ormon – “And then we all yell KABLOOEY and the war on terrorism is won!”

Allan Bourdius – (Girl in lower left corner, looking off frame to her right) Oh, this is SO going to be an OTB caption contest pic!

He who must not be named – Can you fear me now?

“Hello boys and girls, welcome to my neighborhood. President Obama is what we call a public servant, can you say, ‘public servant?'”
“BOZO!!!”
“Good, I knew you could.”

The Monday Contest is already to throw up its hands