The Nothing But Nyet Edition OTB Caption ContestTM is now over.

The Nothing But Nyet Edition OTB Caption ContestTM is now over. 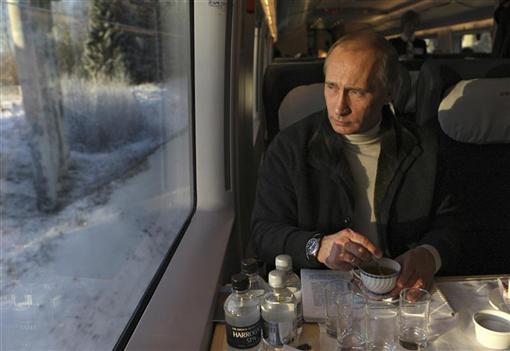 First: Pinky – Bears brag about wrestling him.
Former KGB agents hide from him.
He once gave chemical weapons to Syria, and when he asked for them back, they returned them and said “thank you”.
When he ran for President of Russia, the old president stepped aside.
He’s the world’s most interesting man. “Stay oppressed, my friends.”

Second: C. Clavin – I’ve missed W so much… Since he looked into my soul that day.

Third: al-Ameda – “Asylum to Donald Trump? I don’t think so.”

Allan Bourdius – It appears that I haven’t gotten the trains to run on time yet.

OzarkHillbilly – My morning tea is so much better when brewed from the bitter tears of Chechen patriots terrorists.

Barfour – Putin suddenly realized that there was no more political opponents to be vanquished. He would have cried but he is as cold as ice, he cannot shed tears.

Paul Hooson – So this comrade is driving his pet Russian bear in his Russian GAZ automobile and gets pulled over by a Moscow policeman. Russian policeman tells comrade, “Why you not take Russian bear to zoo?”. Comrade explains, “Took bear to zoo. He like it so much, bear now want to go to the beach…”

He who must not be named –
When I was just a baby my Mama told me, “Son,
Join the KGB and learn to play with guns.”
I shot a man in Moscow just to watch him die.
When I heard Pussy Riot singin’ I hung my head and sighed.

I’m with those rich folks eatin’ in that fancy dining car.
We’re certainly drinking coffee and eating caviar.
I know they had it comin’, I know they can’t be free.
Pussy Riot keeps a singin’ and that’s what tortures me.

“I really should be in the next ‘Old Spice’ commercial”

The Monday Contest has already been flash frozen.