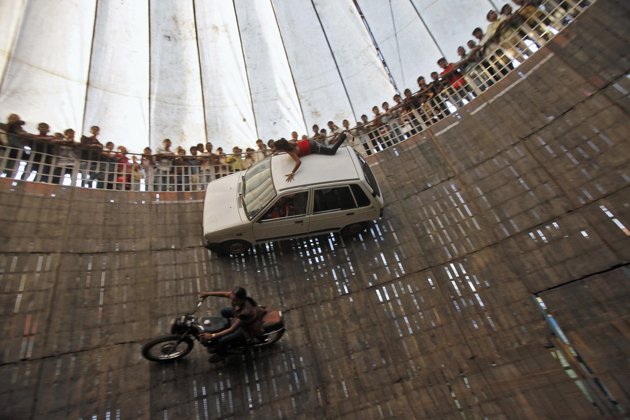 A lot of really good, creative captions this contest. They are worth the read, and are virtually all Winners (‘cept thats not the way it works.)

If you have time to scan through all 58, please do so. (at the time). Thanks for playing

Second: MStrB – Wow, these occupy protesters will do anything to poop on a car.

Mr. Prosser – The citizens watch and laugh at the political clown race, not realizing the whole program is resting on a rickety, gimcrack track of rotten wood.

Moderate Mom – “If she can hang on for two more turns around the track, she wins a job interview with one of our corporate sponsors!”

Maggie Mama – ver since Garmin added Star War character voices, many drivers now believe “the force is with them.”

Harry Reid’s Senate rule changes lead to some rather unexpected procedures to get laws past.

Something went awry when Tidy Bowl became a sponsor for NASCAR

On the next pass, Suzannah failed to clear the mountain

The cornerstone of the US Economy

“I told you to go before we left.”

The Thursday Contest has some red meat for the base constituents.