Paul Ryan Blasts Gingrich On Leadership: “This Is Not The 1990s” 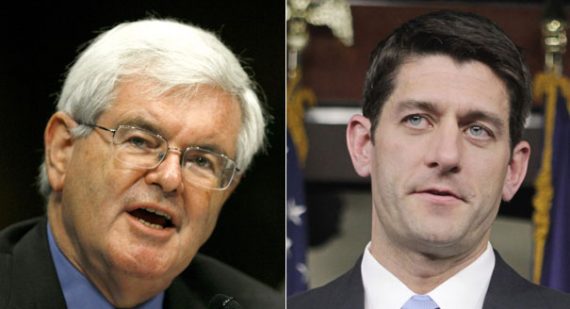 There’s likely still some bad blood between Paul Ryan and Newt Gingrich over the controversy that raged in the Spring when Gingrich, just weeks into his campaign, called Ryan’s Medicare reform plan “right wing social engineering,” thus setting off a firestorm on the right that ended with Gingrich repudiating his statement and bizarrely saying that anyone who used his own words in a future ad was lying. That wound has been reopened, though, thanks to an interview Gingrich gave to Coffee & Markets in which he appeared to return to his previous criticisms of Ryan’s plan:

If there’s a program that is very, very unpopular, should Republicans impose it? And my answer’s no. Reagan ran to be a popular president, not to maximize suicide. I think conservatives have got to understand, you govern over the long run by having the American people think you’re doing a good job and think you’re doing what they want. Now the question is, how do you have creative leadership that achieves the right values in a popular way? [Transcript via Alana Goodman]

Yesterday, Ryan spoke to National Review’s Robert Costa and unleashed a scathing attack on Gingrich, and his leadership style:

Rep. Paul Ryan of Wisconsin, the influential Budget Committee chairman, has kept his distance from the GOP primary. But after reading Newt Gingrich’s latest comments about entitlement reform, he says the contenders must seriously address the debt crisis, not play political games.

Ryan, in an interview with National Review Online, says that he disagrees with Gingrich, and urges Republicans to confront fiscal problems, irrespective of political risk. Worrying about electoral “suicide,” he says, is a disservice to voters, “who don’t want to be pandered to like children.”

“This is not the 1990s,” Ryan says. “The ‘Mediscare’ is not working and we should not back down from this fight. I, for one, believe the country is ready, they’re hungry for it. They are ready to hear real solutions. We shouldn’t wait around for the status quo to become popular.”

“Leaders don’t follow the polls, leaders change the polls,” Ryan says. “We have moved so far in advancing entitlement reform, not just in Congress but in this [presidential] race, with most of the candidates embracing comprehensive entitlement reform. That has been a very good thing. At this point, we should be moving forward, not moving backwards.”

Ryan adds that he is still undecided about whether he will endorse a candidate. But his message to Gingrich and the rest of the field is clear. “Leaders need to go out and change things, speaking to people as adults,” he says. “We should not shy away from this fight, even though we know the Democrats will demagogue us.”

On some level Gingrich has a point, pushing forward with plans that are clearly unpopular just for the sake of pushing them forward isn’t smart politics. At the same time, though, as Ryan puts it, it’s the job of leaders to lead and to make the case for their ideas. Of the two positions, Ryan’s is the one more likely to appeal to conservatives while Gingrich’s attitude suggests, not without cause, that he is more interested in power for power’s sake than in actually accomplishing anything and that the principles he claims to adhere to are mere political contrivances.

This appears to be the line of attack that many conservatives are taking against Gingrich right now, as James Joyner’s post this morning demonstrates, and there are at least some signs that it might be working:

GOP presidential front-runner Newt Gingrich is extremely susceptible to negative ads and drops behind Mitt Romney when hit with charges he pushed for a health care mandate, took money from Fannie Mae and backed other non-conservative issues, according to a new poll provided exclusively to Washington Whispers.

“The percentage of respondents picking Gingrich as their first choice in the primary falls more than 15 points, from 42 to 26 percent,” they said.

In the innovative ad testingof voters nationwide, Evolving Strategies found that former Republican front-runner Romney benefits most from voters turned off by the negative Gingrich ads, with his support rising 10 points, a 39 percent increase in his standing.

But, said Sabrina Schaeffer, managing partner of the firm, Romney isn’t taking advantage of the public’s uncertainty about Gingrich with his current attacks on the former House speaker’s temperament.

“His erratic temperament is a part of the ‘old negatives’ from his speaker days, along with his infidelity. Voters are willing to forgive that because he has appeared different, mellowed in the right ways, on the debate stage,” Schaeffer told Whispers.

“Romney should focus on the ‘new negatives,’ the issue-based attacks on Gingrich from his time out of office; Fannie and Medicare drug expansion lobbying, support for a federal health mandate and cap & trade. These are mostly unknown negatives to most of the public, and they severely undercut the dominant image of Gingrich in the primary voter’s mind as the conservative revolutionary who retook the House and pushed Clinton into signing dramatic reforms,” she added.

Of course, some of these attacks are better handled by campaign surrogates than Romney himself, but the point remains the same. We’ve already seen some evidence that Gingrich’s poll support is softening, if Romney and the conservatives who are panicked over the rise of a Gingrich candidacy want to help that along, they’ve got their guide. Tonight’s debate should be very interesting.