Payroll Tax Standoff May Keep Obama In Washington For Christmas 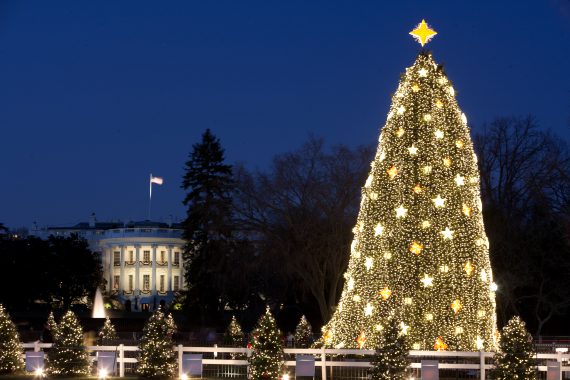 The ongoing standoff over the Payroll Tax Cut is presenting President Obama with a political dilemma regarding the Christmas holidays:

President Obama faces a most difficult decision with the payroll tax extension up in the air, and it isn’t whether to compromise with Republicans.

The toughest call for the president this holiday season may be whether to join his family for Christmas in Hawaii or stay in lonely Washington.

The White House won’t say whether the president is heading west for the holidays—or even if he’s making an abbreviated appearance.

Jay Carney, the White House press secretary, said Tuesday that Obama “intends to stay and work with Congress to ensure that Americans don’t have their taxes go up.”

Even if there’s no ideal time for a presidential vacation, this one comes at a particularly inopportune time.  For weeks, Obama has insisted that lawmakers stay in town to pass the tax extension. Otherwise, as he said earlier this month, “we can all spend Christmas here together.”

Now, with the payroll tax extension compromise unsettled, and members of Congress already back at home, does Obama up and leave, too? Or will the president be forced to spend the holidays at an empty White House with the Yule Log on TV listening to Elvis Presley’s “Blue Christmas?”

“If he stays, he could be seen as the only adult in the room,” said Susan MacManus, a professor of political science at the University of South Florida. “If he leaves, it could hurt him.”

The question of whether Obama would stay in Washington was posed to Carney a couple of times during Tuesday’s briefing at the White House.

“Are you saying there’s a scenario that’s possible, on December 25th, where the president wakes up and ‘It’s a Wonderful Life’ is on, and he puts on his Christmas sweater in the White House, and he’s all alone and his family is in Hawaii?” Ed Henry, the senior White House correspondent for Fox News wondered.

“I’m reluctant to say where he’s going to be on which day because I don’t want to make this about him,” Carney responded after jokingly asking Henry if he’s available to spend time with the president on Christmas. “It is a very fluid situation. It’s hard to know what tomorrow is going to look like, what the next day is going to look like, as this saga continues.”

Of course, it’s entirely possible for POTUS to fly out to Hawaii at the end of the week, spend Christmas with his family, then fly back early next week. After all, it’s not like John Boehner and the House Republicans are going to be spending the weekend reciting Twas The Night Before Christmas on the House Floor while waiting up all night for Santa Claus to arrive. Of course, some would criticize the President for the cost of such a short trip to America’s 50th state, but really, only Scrooge would complain about a father wanting to spend Christmas with his family. Frankly, given the fact that the ball is in the House GOP’s court right now and they seem to be bungling this entire affair, I wouldn’t blame the President for just saying “Guys, I’m going on vacation, call me when you’re ready to talk, you know the number.” As I’ve said here numerous times, I find the political games that get played over Presidential recreational and vacation time to be mostly idiotic, so it frankly wouldn’t bother me.

Nonetheless, the political dilemma the White House is in is pretty clear. Right now, though, the President is winning the PR war here and I’m not sure where he spends Christmas is really going to matter to most people.