One of these people will be the 2012 Republican nominee for President no matter how much you'd like to dream otherwise. 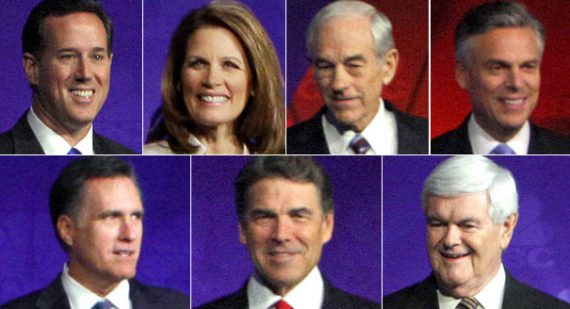 Rich Lowry, who once infamously described Sarah Palin as projecting starbursts, is out this morning with the latest round of speculation about the 2012 Republican field:

Speaking of discontent with the Republican field, I talked the other day to a pretty prominent conservative officeholder who’s constantly been discussing with people around the country the possibility of a new entrant or a push to draft someone. But who? One name he mentioned is Bobby Jindal, who is extremely knowledge, a favorite of conservatives, and has executive experience. One big problem: Jindal is with Perry-literally. Not only has he endorsed him, he’s been campaigning with him. For a Jindal scenario to work, Perry would have to collapse and Jindal turn around and immediately express interest in rising from his friend’s ashes. This officeholder also says that the deadline for ballot access in a lot of states is about two weeks after Iowa, meaning that a drafted candidate would probably have to use some other candidate’s ballot line as a proxy or go with a write-in. All of this sounds quite far-fetched.

Far-fetched doesn’t even begin to describe it. First of all, there’s the rather amusing line “Perry would have to collapse.” I hate to break this to Lowry and this anonymous prominent conservative of his, but Rick Perry has already collapsed. That happened in late September when his own crappy debate performances, which he repeated in November, sent him from the top of the Republican field to the bottom in record time. For the most part, he has not yet recovered from that drop, not in the National polls, in Iowa, South Carolina, or Florida. (Perry was never a factor in New Hampshire even when he was at the top of the field). Perry ended up being so weak a candidate he got eclipsed by a former pizza company executive who had absolutely no grasp of foreign policy and whose only answer on domestic policy consisted of the name of an unworkable tax plan. He wasn’t even able to make the ballot in Virginia. Unless Perry stages some kind of major surprise in Iowa, his campaign is likely dead. So, the idea that a Perry “collapse” would be the genesis of a Jindal campaign is just silly.

Secondly, as is usually the case with these fantasies about some undeclared candidate riding in on a white horse and saving the GOP,  Lowry completely discounts the ballot access issue. In a post earlier this month that dealt with this very issue, James Joyner posted a chart that lays out the problems a late-entry candidate would have:

By the day of the Iowa caucuses, filing deadlines will have already passed in 14 primary states with 527 delegates at stake. By the day of the New Hampshire primary just a week later, filing deadlines will have passed in an additional 6 states with 217 delegates at stake. After that, the deadlines and the primaries just start stacking up on top of each other. The idea that a new candidate, who hasn’t been vetted, hasn’t appeared in any debates, and hasn’t even started putting together a national campaign organization could get into the race at this point is absurd. Lowry’s suggestion that it could be Bobby Jindal is patently silly. Nothing against Bobby Jindal, of course. He’s a racked up a good record in his first term as Governor, got high marks for his response to the BP Oil Spill, and has largely overcome the embarrassment of his rather pathetic response to President Obama’s first State Of The Union address in 2009. At the same time, though, I get no sense that the guy is ready to be President, or that there’s a large constituency inside the GOP clamoring for him to get into the race.  He’s no more the savior of the GOP than Chris Christie would have been. Both men have a bright future ahead of them, perhaps, but 2012 is not their year, and they’d be as foolish to listen to the Lowry’s of the world as Sarah Palin was to listen to Bill Kristol when he whispered in her ear that she’d make a good Vice-Presidential running mate.

Of course even if one accepts the fact that a late-entrant into the race is unlikely, that doesn’t mean you have to end your speculation, because, you can just fall back on that quadrennial dream of the political pundit, the brokered convention:

The other alternative for a new candidate is a convention where no one has a majority of delegates. That also is far-fetched, but not impossible as Brian demonstrated in his “Getting to Brokered” piece.

The linked piece, by NR’s Brian Bolduc, posits yet another scenario under which the Republican race could end up in a situation where none of the candidates have a majority of the delegates. As I explained in my piece on that issue last month, though, this is entirely unlikely even under the “new” delegate allocation rules, not just because of the realities of on-the-ground campaigning, but also because the idea of a candidate who wasn’t in the race already getting the nomination is implausible in the modern world:

Even if we did end up with a brokered convention next year, the idea a candidate who has not spent the last year on the campaign trail, showing up at debates, touring the “rubber chicken” circuit, and, most importantly, being vetted by the media and by the voters, could just walk into the convention hall and claim the nomination is patently silly. That might have been possible in the era before primaries and massive media coverage of Presidential campaigns, when someone that few people had heard of could end up at the top of a major party ticket, but I don’t think it’s true anymore. A candidate who hasn’t been “out there” isn’t going to be a major party nominee in this day and age, and if it did ever happen it would be a near-guaranteed route to electoral disaster for the party that nominates him or her.

So fantasize all you want pundits, but remember this — the Republican nominee will be one of the people who are in the race today. It’s time to accept that simple fact already.