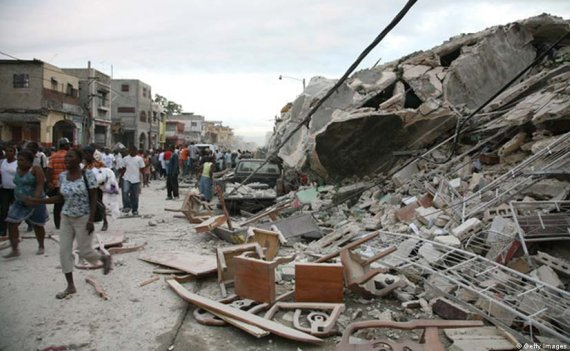 Nine months after a devastating earthquake, none of the money that the U.S. Government pledged for rebuilding aid has actually reached Haiti:

Nearly nine months after the earthquake, more than a million Haitians still live on the streets between piles of rubble. One reason: Not a cent of the $1.15 billion the U.S. promised for rebuilding has arrived.

The money was pledged by Secretary of State Hillary Rodham Clinton in March for use this year in rebuilding. The U.S. has already spent more than $1.1 billion on post-quake relief, but without long-term funds, the reconstruction of the wrecked capital cannot begin.

With just a week to go before fiscal 2010 ends, the money is still tied up in Washington. At fault: bureaucracy, disorganization and a lack of urgency, The Associated Press learned in interviews with officials in the State Department, the Senate Foreign Relations Committee, the White House and the U.N. Office of the Special Envoy. One senator has held up a key authorization bill because of a $5 million provision he says will be wasteful.

The lack of funds has all but halted reconstruction work by CHF International, the primary U.S.-funded group assigned to remove rubble and build temporary shelters. Just 2 percent of rubble has been cleared and 13,000 temporary shelters have been built – less than 10 percent of the number planned.

The Maryland-based agency is asking the U.S. government for $16.5 million to remove more than 21 million cubic feet (600,000 cubic meters) of additional rubble and build 4,000 more temporary houses out of wood and metal.

I suppose the only fortunate thing from a Haitian perspective is that none of the Hurricanes that have made their way through the Caribbean this year have struck the island. Considering that many residents in and around Port-au-Prince still live in makeshit, or no, shelters a storm would have been absolutely devastating.

So, how did this happen ? Well, it’s really just Washington as usual:

t took until May for the Senate to pass a supplemental request for the Haiti funds and until July for the House to do the same. The votes made $917 million available but did not dictate how or when to spend it. Without that final step, the money remains in the U.S. Treasury.

Then came summer recess, emergencies in Pakistan and elsewhere, and the distractions of election politics.

Now the authorization bill that would direct how the aid is delivered remains sidelined by a senator who anonymously pulled it for further study. Through calls to dozens of senators’ offices, the AP learned it was Sen. Tom Coburn, a Republican from Oklahoma.

“He is holding the bill because it includes an unnecessary senior Haiti coordinator when we already have one” in U.S. Ambassador Kenneth Merten, Coburn spokeswoman Becky Bernhardt said.

The bill proposes a new coordinator in Washington who would not oversee U.S. aid but would work with the USAID administrator in Washington to develop a rebuilding strategy. The position would cost $1 million a year for five years, including salaries and expenses for a staff of up to seven people.

So, for the sake of $ 5 million over five years and one additional government position, Senator Coburn is holding up more than a billion dollars in reconstruction aid. I’ve already expressed my opinion about the hold practice in the Senate, but it strikes me that the people of Haiti would be just fine with a few million dollars going to an aid coordinator if it meant that the rest of the money was released.