The prospects for a deal in Congress on DACA are starting to look grim. 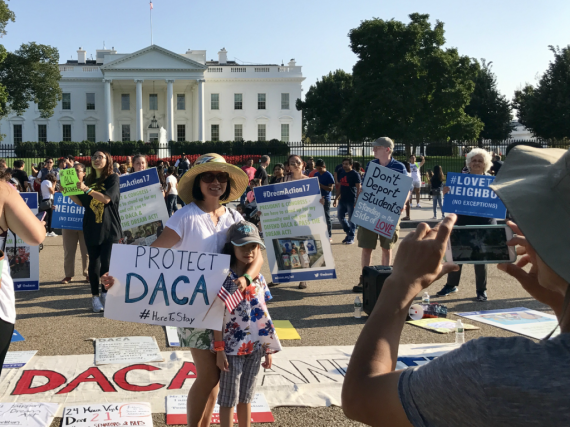 It was just a week ago that Senate Democrats made a deal to end the three-day government shutdown that includes an agreement from Senate Majority Leader Mitch McConnell to bring a bill to extend protection to the beneficiaries of the Deferred Action For Childhood Arrivals (DACA) program in exchange for keeping the government open through at least February 8th. While it does look like such a bill will get before the Senate soon, it’s quickly becoming apparent that it may not be possible to reach a deal on a DACA bill that the House will approve and which the Senate will sign into law:

After months of rhetoric and negotiations on immigration with the parties barely any closer to each other, the reality is beginning to dawn that there may be no deal to be had.

Stakeholders working toward a deal on the Deferred Action for Childhood Arrivals program, likely including border security, are not giving up hope. But the White House’s and some Republicans’ insistence on adding new restrictions to legal immigration and the left’s opposition could be an insurmountable gap.

The White House on Thursday released its proposed framework for a deal on DACA, a program that protected young undocumented immigrants who came to the US as children that President Donald Trump is terminating as of March 5 but pushing lawmakers to replace.

The proposal did have some concessions to Democrats, including a path to citizenship for an estimated 1.8 million undocumented immigrants, but also included aggressive cuts to legal immigration and a push for enhanced enforcement powers, along with upwards of $25 billion for a wall and other border security. The framework also ends family migration beyond spouses and minor children and abolishes the diversity visa lottery.

The proposal was panned by the left and the right. Groups who support restricting immigration slammed it as “amnesty.” Democratic lawmakers and immigration advocates rejected it as a “massive, cruel and family-punishing overhaul of our current legal immigration system,” as New Jersey’s Sen. Bob Menendez phrased it.

The framework, plus Trump’s earlier rejection of an offer from Senate Minority Leader Chuck Schumer to authorize upwards of $20 billion for a wall and a vulgar rejection of a bipartisan proposal from the Senate “Gang of Six,” could mean that the only option left is a temporary extension of DACA with no future certainty. Some lawmakers have even started mentioning the latter option.

>For now a permanent solution for DACA is “dead,” said Leon Fresco, an immigration attorney who led immigration negotiations for Schumer in 2013.

“Thursday pretty much lined it up as the final verdict,” Fresco said. “When Trump proposed something that in orthodoxy was not possible in the Democrat world and got criticized by the right, that was the end of the deal, because how can Trump agree to something more liberal now? … For both sides, the deal is completely unacceptable, so that’s what makes this very complicated.”

Advocacy groups who have been a constant presence on the left pushing for a deal have been disheartened by the lack of success even when they have accepted some concessions.

According to two sources familiar with a meeting of the groups last week, the mood among the pro-immigrant base — even before the White House proposal — was to be in a “fighting mode,” especially after the rejections of proposals they had thought were compromises.

The only acceptable option from here out, the consensus was, is a clean DACA-border security trade, and there was resolve to make clear to lawmakers and key players that groups will reject any deal that tries to include aggressive immigration measures in exchange for DACA.

Fresco said there was a “miscalculation” by those on the right that Democrats would swallow changes to the legal migration system in this deal because they had passed previously in broader, comprehensive negotiations.

But without all of the estimated 11 million undocumented immigrants being legalized, he said, it’s not on the table.

“There’s nothing about what the Republicans are seeking that can’t be obtained in a comprehensive deal,” Fresco said. “They can get everything they want, they just have to accept that everybody who’s here gets to stay. That’s the price of admission.”

As I said from the start, the path to a DACA deal is not going to be an easy one, and the possibility of failure remains high. Getting a deal through the Senate, for example, would require the support of sixty Senators. Assuming that the entire Democratic caucus and the two Independents that vote with them support the bill, that would require the support of at least eleven Republicans. Preferably, the bill would pass by a much higher number than that in order to put as much pressure as possible on a House of Representatives that will likely be far more difficult to convince than the Senate might be. On paper at least, a deal most likely to get that level of support in the Senate would include extending protection to existing DACA beneficiaries, and perhaps a wider population such as that contemplated by the proposal that the White House put out last week, in exchange for some level of funding for Trump’s border wall. This appears to basically be the deal that Senate Minority Leader Chuck Schumer thought he had struck with President Trump prior to the shutdown only to have the rug pulled out from under him hours later. In the Trump/Schumer negotiations, the amount of funding for the wall was roughly $15 billion, but the White House now appears to be demanding as much as $25 billion for the wall. While Schumer did say last week that the offer he made to Trump was off the table, it seems likely he’d be willing to put it back on if it would lead to a successful vote benefiting the DACA beneficiaries. Whatever the amount, though, it seems clear that this is the kind of deal that could make it through the Senate and while Trump’s wall is an idiotic idea and a boondoggle, it seems like a small price to pay for getting relief for DACA beneficiaries.

Even if such a bill passes the Senate, though, it faces an uncertain future in the House. House Republicans have made it clear that they want a DACA deal that includes far more than what could make it through the Senate. This would include provisions addressing so-called chain migration and an end to the visa lottery, which is essentially what the White House is apparently proposing. Even with these provisions, though, it’s not at all clear that the bill would get the support from House Republicans that it would need to pass, and the more that gets added to the bill the less likely it is that Democrats would support it. It’s because of all of this that the prospects for a DACA deal before the ostensible March 5th deadline after which the program would expire are appearing to become thin.

If there is a path forward, it’s looking to be a very narrow one:

One remaining option that looks increasingly likely is for Congress to pair a temporary extension of DACA with government funding, perhaps with some border security, and punt a longer-term deal into an indefinite future

Sen. Lindsey Graham, a South Carolina Republican, told reporters January 8 that if a deal can’t be reached, lawmakers would find another way, according to Roll Call.

Senate Majority Whip John Cornyn, a Texas Republican, told reporters last week that a deal will be “temporary for temporary, permanent for permanent” — meaning if Democrats can’t agree to massive border security, the DACA deal won’t be permanent, either.

“If you want an annual appropriation then I think you’ll get a one-year extension of the DACA status,” Cornyn said.
Frank Sharry, an advocate with America’s Voice Education Fund who has spent decades negotiating immigration in Washington, said he’s not giving up hope — yet. But he acknowledged that on immigration there’s a “sweet spot” that seemed pretty close to the “Gang of Six” bill the White House rejected.

“I’m not prepared to declare this dead at all, because we’re far from dead,” Sharry said. “When the White House realizes this is going nowhere and Republican leadership is going to be left holding the bag, they may say, ‘Let’s do something narrow and do it quick.’ And it’ll be border security and a DACA fix.”

A temporary solution would only kick the can down the road, of course, but it may be enough to get through both chambers of Congress.

All of this is happening, of course, with yet another Federal Government shutdown hanging over the heads of Congress if they don’t get a spending bill passed by midnight on February 8th. While Democrats in the Senate have already begun saying that they won’t hold a spending bill hostage to the successful passage of a DACA deal, they may be pressured to do just that from within their own party. The ink was barely dry on the deal that ended the shutdown last Monday before Schumer and other Senate Democrats started getting blowback from within their own party over what was perceived by some to be a cave in on their part. If it starts to become clear between now and then that getting to a deal on DACA isn’t going to be as simple a some may have thought, then pressure could grow to use what essentially amounts to the only bargaining chip the Democrats have to force the issue. Given the fact that Senate Majority Leader McConnell has made clear that his agreement to move forward on a DACA bill is contingent on keeping the government open, however, it seems unlikely that tactic would be any more successful next month than it was this month.

Perhaps President Trump will address this issue further in his State Of The Union address tomorrow night, but as things stand now the prospects for a DACA deal are not looking good even if we take everyone at their word that they want to get a bill passed.