Rand Paul is one of the few Republicans who seems to be evaluating the new policy toward Cuba through something other than an outdated Cold War perspective. 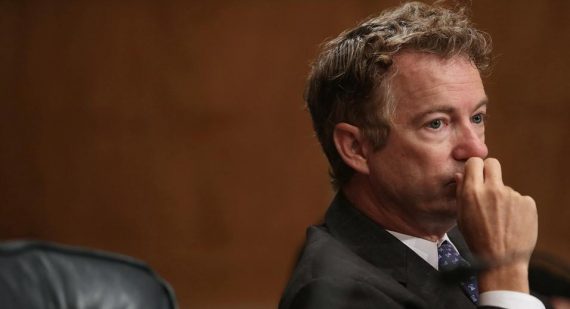 Kentucky Senator, and probable candidate for President in 2016, Rand Paul is breaking with many members of his own party, and other potential Republican candidates for President, in offering at least some support for the President’s opening to Cuba, highlighting yet another area where he seems likely to offer a contrast but which is also likely to become an area of attack against him in a primary race:

Sen. Rand Paul broke with other likely Republican presidential contenders on Thursday by saying that opening up more trade with Cuba “is probably a good idea” and declaring that the U.S. embargo on the country “just hasn’t worked.”

The Kentucky senator’s comments to the West Virginia radio station News Talk 800 WVHU came a day after the White House announced it would normalize relations with the communist island.

The other likely GOP 2016 contenders who have weighed in so far on the plans have expressed fierce opposition. But Paul has taken a number of positions on foreign policy that have been at odds with many in his party.

“The 50-year embargo just hasn’t worked,” Paul said in remarks confirmed by his office. “If the goal is regime change, it sure doesn’t seem to be working and probably it punishes the people more than the regime because the regime can blame the embargo for hardship.”

Paul in the past has indicated support for allowing diplomatic talks with Iran over its nuclear program to continue, another policy at odds with many leading Republicans. He also has argued that a less aggressive foreign policy is appealing to younger voters and others who don’t traditionally vote for Republicans.

Paul is, of course, correct in his assessment that the embargo that was put in place 52 years ago, and which largely remains in effect notwithstanding the steps that the hopeful and helpful steps that the President took yesterday, has done little to either help the Cuban people or undermine the Castro regime. As far as the Cuban people go, all that it seems to do is to ensure that an economy that has been on the rocks for decades remains there as the nation remains cut off from what would obviously be its more lucrative trading partner, and a lucrative trading partner for the United States in turn as it was in the years before the 1959 Revolution although this time hopefully on a much more equal footing. In the years of the Cold War, of course, the Cuban Government was able to shield its people from some of the impact of the foolish economics of Castro socialism thanks to the subsidies it was receiving from the Soviet Union. When those were cut off as the Cold War was collapsing, there was much speculation that the Castro regime would not be far behind, but the regime managed to survive and, in more recent years, has exploited its relationship with the anti-American regime in Venezuela to obtain energy supplies despite a shortage of hard currency. The regime in Havana has also been aided by the fact that, in the wake of the end of the Cold War, many European nations, along with nations like Canada eased their own policies vis a vis Cuba despite the fact that the United States kept its embargo in place for reasons that have more to do with domestic politics and ongoing resentments from the Cold War on both sides of the ninety mile divide between the U.S. and Cuba than with anything approaching a rational foreign policy. As Paul goes on to note, there remain a host of complicated issues between Havana and Washington, but since we know that following the same road we’ve been on since 1961 isn’t going to change anything there’s nothing wrong at all with trying a different path.

In taking this position, Paul is of course differentiating himself from several potential rivals for the Republican Presidential nomination, including Marco Rubio, Ted Cruz, and Jeb Bush, as well as what would appear to be the majority of the Republicans on Capitol Hill. This isn’t an unusual position for the Senator to be in, of course, since he’s done similar things with regard to U.S. drone and surveillance policy as well as foreign policy, however it does present another example of the difficulties that he is likely to face if he does in fact run for President in 2016. For the most part, Senator Paul has gotten a good deal of mostly positive press coverage when he takes these contrarian positions, and he’s so far taken only a small number of attacks from fellow Republicans for his refusal to adhere to party orthodoxy. While some of those attacks have come from prominent members of the GOP like John Bolton, Chris Christie, Dick Cheney, and Rick Perry, they have been relatively low key so far. If Paul runs for President, and especially if he becomes a major player in the race, he’s likely to become the focus of attacks on issues such as this from all quarters of the GOP. Perhaps he can withstand them and bring to the polls in the early primary states a constituency that is truly interested in taking the Republican Party in a different direction when it comes to issues such as foreign policy and civil liberties. The Senator better be prepared to take some incoming fire, though, because it is going to come, and it is going to be quite severe when it does.