The Generic Congressional Ballot has shifted again, but how long will this trend last?

Back in mid-October in the wake of the Syria debate and the Federal Government shutdown debacle, Congressional Democrats were crowing over poll numbers that seemed to be decidedly in their favor. Not only were Republicans on Capitol Hill registered historically low approval numbers, but the Generic Congressional Ballot, which asks voters if they were more inclined to vote for a Republican or a Democrat in next year’s 2014 Congressional midterms, showed their part with an advantages as high as somewhere between seven and nine points, a number which suggested to some that Democrats at least a chance of regaining control of the House. In reality, of course, the reality of how Congressional elections are handled at the District level made the odds of a Democratic takeover fairly low, although the poll numbers at the time did put into doubt the probability of a GOP takeover in the Senate.

That, however, was six weeks ago. Since then, the shutdown seems to have largely faded into political memory and we’ve been faced with virtually nonstop coverage of the disastrous Obamacare rollout and another round of what the general public likely views as purely partisan fighting in the Senate over judges and filibusters. The result has been rather predictable. As I noted both last week and yesterday, President Obama has suffered significantly in the polls, and now CNN is out with a new poll showing that the GOP has retaken the lead in the Generic Congressional Ballot:

Washington (CNN) – What a difference a month makes.

A new CNN/ORC International poll indicates a dramatic turnaround in the battle for control of Congress in next year’s midterm elections.

Democrats a month ago held a 50%-42% advantage among registered voters in a generic ballot, which asked respondents to choose between a Democrat or Republican in their congressional district without identifying the candidates.

That result came after congressional Republicans appeared to overplay their hand in the bitter fight over the federal government shutdown and the debt ceiling.

But the Democratic lead has disappeared. A new CNN/ORC poll indicates the GOP now holds a 49%-47% edge.

The new survey was conducted last week and released Tuesday.

The 10-point swing follows a political uproar over Obamacare, which included the botched rollout of HealthCare.gov and controversy over insurance policy cancelations due primarily to the new health law.

The turnaround in the CNN/ORC poll follows similar shifts in recent national surveys from Quinnipiac University and Fox News.

“It looks like the biggest shifts toward the Republicans came among white voters, higher-income Americans, and people who live in rural areas, while Democrats have gained strength in the past month among some of their natural constituencies, such as non-white voters and lower-income Americans,” said CNN Polling Director Keating Holland.

“If those patterns persist into 2014, it may indicate that Obamacare is popular among those who it was designed to help the most, but unpopular among the larger group of voters who are personally less concerned about health insurance and health care,” Holland said.

Republicans currently have a 17-seat advantage in the U.S. House with the Democrats holding a 55-45 majority in the Senate.

The CNN/ORC results echo a dramatic shift that has occurred over the past six weeks as reflected in the RealClearPolitics poll average which, factoring in the CNN poll, now shows the GOP with a narrow one point lead, a lead which suggests that the party would be likely to retain control of the House (the Generic Ballot seems to have less predictive value when it comes to the Senate). As the chart shows, the shift over the past six weeks has been swift and dramatic: 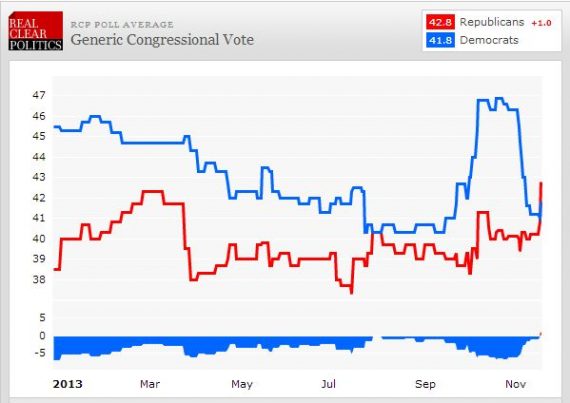 There are, as always, several caveats to consider when looking at numbers like this. The most obvious, of course, is that the events of the past six weeks demonstrate quite plainly just how fluid this poll can actually be. Indeed, all one need to is look to a point about six weeks prior to the Democratic high point in mid-October and see a point where the two parties were virtually tied. Additionally, as CNN’s own pollster observes, we’re still quite a long way from Election Day 2014:

“There is just under a year to go before any votes are actually cast and the ‘generic ballot’ question is not necessarily a good predictor of the actual outcome of 435 separate elections,” Holland cautions.

“A year before the 2010 midterms, for example, the Democrats held a six-point lead on the generic ballot but the GOP wound up regaining control of the House in that election cycle, thanks to an historic 63-seat pickup,” he said.

With more than eleven months to go until Election Day, and most incumbents in vulnerable districts not even facing a named opponent yet, it’s hard to say exactly what that means for November 2014 right now. If these trends continue, of course, then it appears that the GOP’s House majority would be secure and that it would be in good position to pickup a good number of Senate seats if not grab narrow control of the body itself. However, if there’s one thing we’ve learned in politics in the United States over the past eight years or so, and especially over the past five years, it’s that trends rarely continue. So, it’s worthwhile to keep an eye on these poll numbers but, as always, what matters are the trends leading up to Election Day rather than the numbers at a given time.