A new round of Congressional Ballot polls seems to put Democrats in a strong position for the 'blue wave' they've been hoping for all year. 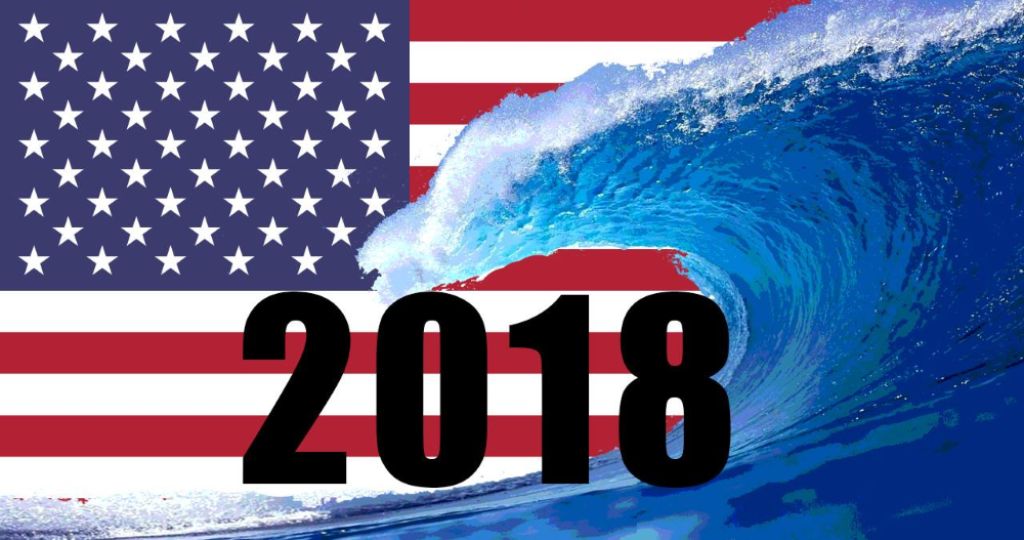 Just over seven weeks from now, Americans will head to the polls in the first midterm elections of Donald Trump’s tenure as President, and many more will have already voted early or by absentee ballot in states where that is possible, and the pre-election polling continues to look quite favorable for the Democratic Party’s chances of gaining control of at least the House of Representatives for the first time since the 2010 elections.

First up, there’s a new poll from National Public Radio and Marist College that gives Democrats a double-digit lead heading into the midterms:

In a troubling sign for Republicans less than two months before November’s elections, Democrats’ advantage on the question of which party Americans are more likely to vote for in November is ballooning, according to a new NPR/Marist poll.

The gap has widened to 12 percentage points, up from 7 in July — and it is largely because of voters in the Midwest. They have swung 13 points in Democrats’ direction since July. That Midwestern shift is consistent with what Marist has found in statewide polls conducted for NBC in Michigan, Wisconsin and Minnesota that showed President Trump’s support there starting to erode.

“Every way we are looking at the data, the same general pattern is emerging,” said Lee Miringoff, director of the Marist Institute for Public Opinion, which conducted the poll. “The Midwest is an area that is getting restless about what they hoped was going to occur and what they feel is not occurring.”

Trump has waged trade wars with several countries, aiming to renegotiate deals and has instituted tariffs on imports that have been met with retaliatory tariffs on exports. Many of those have taken a toll on Midwestern farmers, for example. And some automakers have come out against Trump’s moves on car imports, hitting Trump with some tough headlines.

And that appears to be sticking to the GOP now.

“Republicans have not only been fairly silent in opposition to the president,” Miringoff said, “but they’ve been driving very hard in the Senate when it comes to his Supreme Court nominee. Congressional Republicans are buying into Trump for November. In terms of brand, they look totally in lockstep with the president — and that has become extremely clear to voters.”

Overall in the poll, half of voters (50 percent) said they are more likely to vote for the Democrat in their congressional district over the Republican (38 percent). In July, the Democratic edge was 47 percent to 40 percent.

These numbers are substantiated by the most recent Quinnipiac Poll:

Democrats hold a 14-point lead over Republicans on the generic House ballot, according to a new poll released by Quinnipiac University on Wednesday.

The survey found that 52 percent of American voters favor a Democratic candidate in the upcoming midterm elections, while 38 percent back a Republican.

The 14-point advantage marks a solid increase for Democrats. In an identical survey in mid-August, the party held a 9-point lead over Republicans.

Democrats have a sizable lead over Republicans when it comes to independent voters. Fifty percent of respondents who identify themselves as an independent say they’d vote for a Democratic candidate. Thirty-five percent intend to vote for a Republican.

A new Politico/Morning Consult poll, meanwhile, gives Democrats a ten-point advantage over Republicans, as does the new CNN/SSRS poll:

Democrats maintain a wide lead over Republicans in the race for control of the House of Representatives, a new CNN Poll conducted by SSRS finds, including a 10-point lead among those most likely to turn out this November.

In a generic ballot test, 52% of likely voters back the Democratic candidate for House of Representatives in their district while 42% back the Republican. Among all registered voters, Democrats hold a 12-point margin over the GOP, suggesting preferences have not shifted much since an August CNN Poll, which did not include an assessment of likely voters.

The new poll marks the first time this election season CNN has looked at preferences among likely voters. Typically, likely voters in midterm elections are a bit more Republican-leaning than the broader pool of registered voters. This year, Democrats are expressing just as much interest in voting as Republicans, and voters who are Democrats or Democratic-leaning independents continue to be more enthusiastic about casting a ballot for Congress than those who tilt toward the GOP (56% are extremely or very enthusiastic vs. 50% of Republican voters).

The results of the poll suggest a midterm environment that is looking a lot like 2006, when Democrats took control of the House amid widespread voter dissatisfaction with Republican president George W. Bush and his handling of the war in Iraq. In 2010, backlash to President Barack Obama and the passage of Obamacare led to the organization of the ideological Tea Party movement, which boosted Republicans back into control of the House. In September of 2006, CNN polling also found Democrats with a 10-point lead over Republicans on the generic ballot.

The President is a negative motivator for a majority of voters, according to the poll, with 54% saying they would be more apt to support a candidate who opposes President Trump. About a third (36%) say they’re partial to supporting a candidate who backs the President. Those figures have shifted against Trump since the question was last asked in May (48% said they’d prefer an anti-Trump candidate in that poll, 43% a pro-Trump one).

Views of the President are closely tied to preferences in the House ballot: Among those likely voters who approve of the way the President is handling his job, 89% plan to back the Republican in their district, while 87% of those who disapprove favor the Democrat.

And more Americans say the country would be better off (40%) than worse off (28%) should Democrats take control of Congress in this November’s elections. That’s a wider margin that felt the nation would be better off should Republicans take control back in 2010. Only about a quarter now (27%) say it doesn’t make a difference, fewer than felt that way in 2014 or 2010, suggesting voters see this year’s contest as more consequential.

The results come as multiple polls show similar shifts in the Democrats’ favor in the dynamics of the midterm race. It is the third poll released in the past two days to show Democrats with a double-digit lead over Republicans on a generic ballot question.

What all this means is that there has clearly been a strong and continuing shift in momentum in favor of Democrats that only appears to be getting stronger as we get closer to Election Day.

The RealClearPolitics poll average, for example, puts the Democrats at 48.8% and Republicans at 40.5%, giving Democrats an 8.3 advantage, which is actually down somewhat from where it was two weeks ago. This, however, could be a reflection of the extent to which outlier polls like Rasmussen and YouGov are having on the poll at the moment. The Pollster average for the Generic Ballot, meanwhile, puts Democrats at 45.1% and Republicans at 39.0%, giving Democrats a 6.1 point advantage. This is also a slight dip from where things stood at the start of the month, but not as large a difference as the RealClearPolitics average. FiveThirtyEight’s average, meanwhile, which is somewhat weighted to account for poll reliability, puts Democrats at 49.0% and Democrats at 39.9%, giving Democrats an 9.1 point advantage, also a slight dip from two weeks ago. Finally, the FiveThirtyEight forecast gives Democrats an 82.7% of winning control of the House while Republicans are given a 17.3% chance of retaining control. Notwithstanding the fact that the poll averages have narrowed slightly, as the RealClearPolitics chart shows, the trend clearly seems to be moving in a positive direction for Democrats: 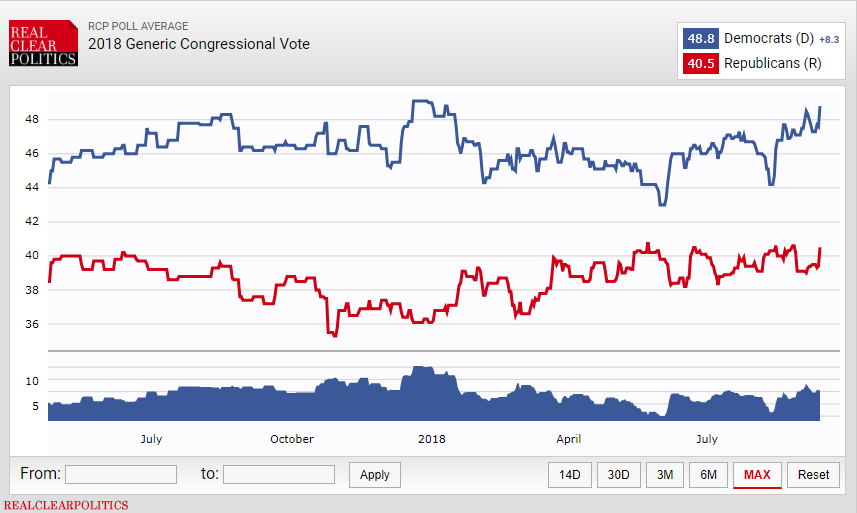 As of right now, Republicans have a 23 seat advantage over Democrats in the House of Representations. This means that Democrats need to pick up a net of at least 24 seats in order to gain control of that body. Based on these Generic Ballot numbers, one would expect that Democrats would pick up as many as 40 seats, which would be more than enough to give them fairly solid control of that body. Additionally, as I’ve stated before, the most recent forecast from the Cook Political Report suggests Democrats could pick up between 25 and 35 seats, and that is is a projection that was made before the Generic Ballot started moving strongly in the Democrat’s direction. If this projection  If the Cook Report projection is correct then it means that Democrats would end up with a slim majority in the House. If the polling that has taken place in the wake of that report is accurate, then the Democratic majority would be even more substantial, as would the Republican Party’s headaches in 2019 and 2020 since it would mean that, at the very least, Democrats would use their majority to launch investigations into the Trump Administration not unlike those that Republicans launched during the Obama years.  Given these polls, and assuming that the current trend continues, my current projection, which is unchanged from where it was two weeks ago, would be that Democrats would be likely to gain between 35 and 45 seats in the House.