Recent polls have caused Republicans to become more optimistic about their chances in this year's midterms. That optimism is both premature and misplaced. 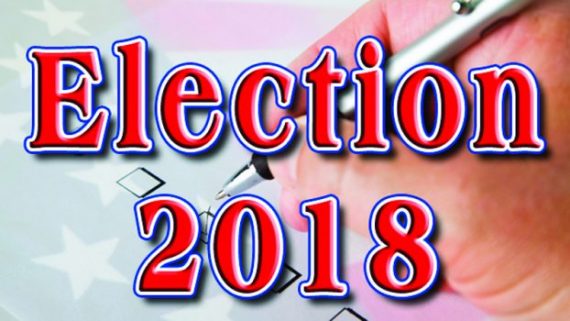 Thanks in no small part to recent polling that has shown the Democratic lead in the Generic Congressional Ballot shrinking, Republicans in general and conservatives particularly seem to have become more optimistic about the GOP’s chances in the November midterm elections. In his latest piece for the National Journal, though, political analyst Charlie Cook argues that this optimism is largely misguided:

Republican hopes these days rest on two things. First, their deficit on the generic congressional ballot seems to have declined from 13 points in late December to about 5 points now, according to the FiveThirtyEight average of polls. It’s plausible that passage of the tax-cut bill in December put a bit of starch in Republican voters’ shorts. There is a general feeling that because of where the lines lay, Democrats need to win the national popular vote for the House by somewhere in the neighborhood of 7 to 9 points. The GOP’s second hope is that the economy will remain strong through the election and that at some point, President Trump and congressional Republicans will begin to get some credit for it.

But while these high hopes were emanating from last week’s Republican congressional retreat at The Greenbrier, data from individual races on both the district and statewide level reveal that the plight of Republicans actually appears to be even more difficult than it seemed last fall. This is particularly true with individual-race polling, but other indices such as candidate recruitment and campaign fundraising are sending “Danger, Will Robinson!” messages. This is particularly true in the House, where there are quite a few GOP incumbents in competitive and potentially competitive races who are not raising the kind of money they will need if there is much of a Democratic wave at all.

The fact is that Democrats were on the unfriendly side of two wave elections in the last decade, in 2010 and 2014, while for Republicans, it has been a dozen years since the GOP got hit with one. In 2006, when President George W. Bush’s last Gallup job-approval rating before the midterm election was 38 percent (sound familiar?), Republicans lost both their House and Senate majorities. There is a lot of cherry-picking poll data, searching out the most optimistic numbers around, that seems to be giving some Republicans a degree of complacency that is at odds with averages and hard data.

In an analysis released Sunday of more detailed data from the Jan. 15-18 ABC News/Washington Post poll, much of the national 14-point Democratic lead among likely voters in the generic-ballot question was among voters in districts already represented by Democrats, where they had a 38-point lead—64 to 26 percent. This no doubt was a finding that encouraged Republicans, but the analysis also revealed that in districts already represented by Republicans, the GOP advantage on the generic was just 6 points, 51 to 45 percent. In other words, Republicans have a lot of districts where their leads are very, very narrow while Democrats have very big leads in their districts. It wouldn’t take that much of a wave for a large number of seats to drop against the GOP.

As I noted in my own post about the Post/ABC poll over the weekend, jumping to conclusions about where the midterm elections are headed at this point is mistaken, and this applies to both sides of the political aisle. Democrats have been, and largely remain, optimistic about their own chances in the midterms thanks to their lead in the Generic Congressional Ballot and the fact that President Trump remains historically unpopular notwithstanding the fact that his numbers have improved in recent weeks from some of the lows we saw heading into the end of 2017. Similarly, Republicans have become more optimistic due to the fact that recent polls have shown the Democratic advantage in the generic ballot shrinking from where it was and the fact that the President’s approval number has improved markedly over the past month or so. The most notable example of the reasons for Republican optimism can be seen in the recent Monmouth University poll, which showed both markedly improved job approval numbers for the President and a Democratic advantage in the Generic Congressional Ballot of two percent, well within the margin of error. Since then another more recent poll from Investor’s Business Daily showing the Democrats with a five-point lead, a number that is more consistent with the RealClearPolitics average, which shows Democrats with a 6.5 point lead. The Pollster average meanwhile gives Democrats an 4.8 point lead, and the FiveThirtyEight average gives Democrats a 5.9 point lead. All that being said, the RealClearPolitics chart does show the degree of movement we’ve seen in the generic ballot over a short period of time: 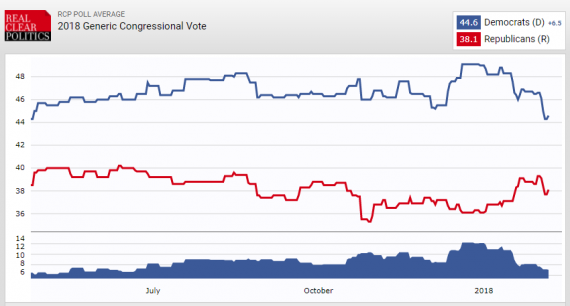 Given the trend that this chart depicts, it’s easy to see why Republicans have turned more optimistic about their chances in November. Clearly, the trend that lasted throughout most of 2017 that showed Democrats with a double-digit lead in the generic ballot that suggested that there was momentum for what could be a wave election in 2018 is over for the time being. That doesn’t mean, though, that things are likely to turn out well for the GOP in nine months for several reasons. First, as I noted over the weekend, it’s simply still too early to be able to accurately draw conclusions about where the midterms are headed based on either the generic ballot or on the President’s job approval numbers. Second, history tells us that the most likely outcome of these first midterms of President Trump’s term in office is likely to be that the Republicans will lose seats in Congress.

In that respect at least, the GOP may have more to worry about in the Senate than the House given the fact that they hold on to a slim one-seat majority there and there are several seats that appear as if they could be vulnerable in November, including Nevada, Arizona, and possibly even the open seat created in Tennessee by the retirement of Senator Bob Corker. The one thing that could save the GOP in the upper chamber is the possibility that they could offset losses in one or more of those states with pickups in one or more of the traditionally red states where there is a Democratic incumbent up for reelection, specifically including Montana, North Dakota, and Missouri. They may also have a chance at a pickup in one or more of the previously Democratic states that President Trump managed to win in 2016, including Wisconsin, Michigan, Ohio, and Pennsylvania. Since there’s been little reliable head-to-head polling of the races in any of these states, though, it’s too hard and far too early to make even an educated guess as to the likely outcome in November.

Over in the House, the size of the Republican majority makes it seem inevitable that there will be some seats lost, the only question is how many and whether it would be enough to swing control to Nancy Pelosi and the Democrats. In order for that to happen, Democrats would need to pick up at least 25 of the 238 seats currently controlled by the Republicans. That’s a tall order, but hardly an impossible one in the current political environment. As Cook notes above, the polling seems to indicate that the Republican advantage in Republican-leaning districts is distinctly weaker than it should be for the GOP to be confident in their ability to hold on to those seats in November. Conversely, that same polling shows that in Democratic-leaning districts Democrats have comfortable leads that should minimize the ability of the GOP to offset Democratic gains with their own pickups in blue districts.

Taking all of that into consideration, Cook’s analysis that the recent Republican optimism about 2018 is both premature and largely misplaced. Perhaps as the year goes along, there will be additional data that will reinforce the notion that the Republican majorities in Congress will remain secure regardless of the political winds they have faced over the past year. At the moment, though, there’s no reason for the GOP to start thinking that 2018 won’t be that bad after all, because in the end it wouldn’t take much for the natural tendency for the opposition party to gain seats in a midterm like the one we’ll have this year to turn into something sufficient to cause them to lose their majorities in both chambers of Congress.