Rick Santorum: A Straight Dad In Prison Is Better Than Two Gay Dads Who Aren’t

Rick Santorum returns to his old ways when asked about same-sex marriage. 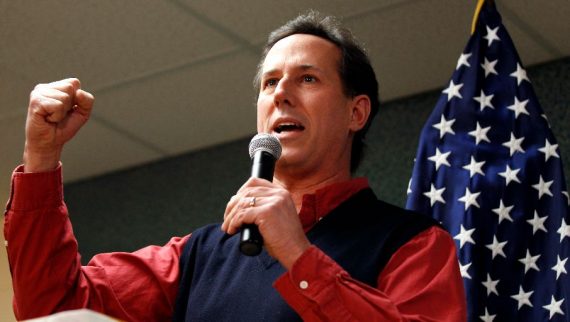 Rick Santorum’s crusade against people whose private affairs he does not approve of leads him to the most interesting logical quandaries at times:

For the second time in as many days, Rick Santorum waded into the issue of gay marriage, suggesting it was so important for children to have both a father and mother that an imprisoned father was preferable to a same-sex parent.

Citing the work of one anti-poverty expert, Santorum said, “He found that even fathers in jail who had abandoned their kids were still better than no father at all to have in their children’s lives.”

Allowing gays to marry and raise children, Santorum said, amounts to “robbing children of something they need, they deserve, they have a right to. You may rationalize that that isn’t true, but in your own life and in your own heart, you know it’s true.”

At a private boarding school Friday, the Republican presidential candidate’s voice grew emotional as he argued that only a man and woman should be able to marry. “Marriage is not a right,” Santorum said. “It’s a privilege that is given to society by society for a reason…. We want to encourage what is the best for children.”

The audience, half students and half local residents, reacted with snorts and applause.

This was the second time in as many days that Santorum’s opinions on same-sex marriage got him into a debate with a hostile audience. The same thing happened Thursday when he spoke before a college audience:

CONCORD, N.H. — Rick Santorum engaged in an extended and sometimes testy exchange over same-sex marriage with a group of college students during a campaign appearance on Thursday.

Mr. Santorum was speaking at the College Convention 2012, a forum organized by New England College and open to students from all over the state, regardless of political party. A press release from the college describes it as “a unique opportunity for students to participate in this important dialogue.”

One student started the conversation by asking Mr. Santorum — a fervent opponent of same-sex marriage — why he did not think that equality required allowing members of the same gender to marry.

Instead of offering a quick answer and moving on to another subject, Mr. Santorum began a Socratic lecture about changing the laws on marriage, repeatedly asking the students questions.

“Don’t you have to make the positive argument why the law should be changed?” he asked several of them.

As the students pressed him on the morality of letting gay men and lesbians marry, Mr. Santorum engaged them even further.

First, he compared changing marriage laws to building a bridge. You have to have a reason to build the bridge, he said. He then said that many of the things that same-sex marriage advocates want — like the ability to visit loved ones in hospitals — can be accomplish through contract law.

“Can that right be legally done right now through contract?” he asked. “Yes it can.”

But the testiest part of the exchange came when an audience member suggested that gay people should be allowed to marry because they have a right to happiness.

In response, Mr. Santorum asked whether she thought that more than two people should be allowed to marry, apparently trying to suggest that the questioner was advocating an extreme position.

Here’s the video of that particular part of the exchange, for which Santorum has received praise from many on the right for making what they think is a good point but which ended with Santorum receiving boos as he walked off the stage:

Santorum is no stranger to controversial comments about same-sex marriage, of course. Back in 2003, he infamously compared homosexuality to “man on child, man on dog, or whatever the case may be.”  In fact, it was this comment of Santorum’s that set Dan Savage off on the campaign that led to Santorum’s “Google Problem.”

It’s the kind of rhetoric that Santorum has become well-known for over the years, but it’s also something he has seemingly shied away from during this campaign, choosing instead to concentrate on issues like the economy and the middle-class populism that he rode to a seat in Congress and then a two terms in the United States Senate. In New Hampshire in particular, it seems incredibly unlikely that it would be helpful for him. New Hampshire, after all, is one of the states where same-sex marriage is legal, thanks not to a court decision but to a law passed by the state legislature and signed into law by the Governor. While there is apparently some effort to attempt to repeal the law and return to civil unions, it’s also quite apparent that the anti-gay attitude that people like Santorum project so easily is going to play well in the Granite State.

As for Santorum’s comments themselves, I think Andrew Sullivan has the best response:

That Santorum has regurgitated the polygamy point reveals, it seems to me, the weakness of his thinking on this issue. Gay people are not seeking the right to marry anyone. They are seeking the right merely to marry someone. Currently we are denied that basic civil right that every heterosexual takes completely for granted, in most states. The issue of polygamy is completely different and separate. Currently, no straight people have a right to a three-way marriage, let alone gay ones. I think there are very good social reasons for that, although it’s certainly worth debating. But it’s another debate. The only way Santorum’s argument works is with the premise that gays denied any right to marry are denied no right at all. They are not in the same category as heterosexuals, and their relationships, and the benefits they bring, are inherently inferior, indeed morally repugnant.

That last part is the most important point, I think. The view that Santorum and his cohorts hold may be a popular one among evangelicals in places like Iowa and in the South, but it’s fairly apparent that it is completely out of step with the manner in which this issue is viewed by the American public, especially younger Americans. Poll after poll over the past several years has shown increased public acceptance of homosexuality in general and same-sex marriage in particular (see here, here, and here). It is quite an extraordinary shift in public opinion on an issue that had not to long ago been considered barely acceptable to talk about in public, perhaps second only to the shifts in public attitudes that we saw in the wake of the Civil Rights movement (although even there it’s worth noting that it wasn’t until 30 years after Loving v. Virginia that a majority of Americans supported interracial marriage). It’s the younger generations that area leading the change on this issue and, within a decade or so, I have no doubt that many people will look back on the past and wonder how we could have held such views about our fellow human beings.

Santorum may only be in his 50s but he represents the past. If the GOP wants to win the future, to borrow a phrase, hitching its wagon to his hateful rhetoric is precisely the wrong way to do it.