With twenty days to go until Election Day, the race in Wisconsin is incredibly close:

Likely voters are split on the president’s job performance: 48 percent approve, and 48 percent disapprove. A slim majority, 52 percent, view Obama favorably, compared to 45 percent who view him unfavorably. That is slightly better than Romney’s image, which is 46 percent favorable, versus 48 percent unfavorable. Forty-nine percent of Badger State voters have a favorable impression of home-state Rep. Paul Ryan, the GOP vice-presidential nominee.

Marquette is considered a very reliable poll in Wisconsin, and it’s results put the RealClearPolitics poll average at +2.0 in the President’s favor, with clear signs that Romney has been inching up recently: 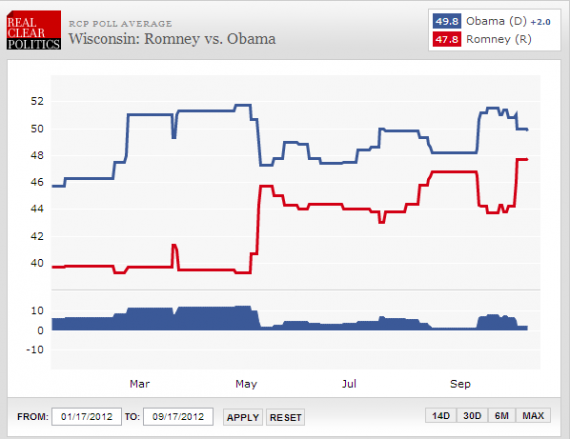 Wisconsin has been the biggest surprise toss-up of the race this year, and if Romney/Ryan can some how manage to push the state into their corner then those 10 Electoral Votes would go a long way toward off-setting a possible disappointment in a state like Virginia.