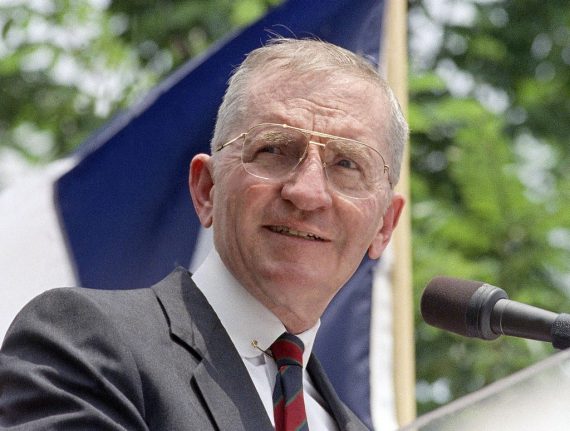 Ross Perot, who garnered 19% of the vote in the 1992 Presidential Election and roughly 8% of the vote four years later, is out with an Op-Ed in The Des Moines Registerendorsing Mitt Romney for President:

(CNN) - Former presidential candidate Ross Perot came out in favor of Mitt Romney Tuesday, writing in a newspaper editorial the 2012 GOP nominee was in a better position to slash America’s ballooning federal debt.

Perot, who ran as an independent candidate in 1992 and 1996, wrote in the Des Moines Register President Barack Obama hadn’t done enough to fix a stalled economy.

“Our country faces a momentous choice,” Perot wrote. “The fact is the United States is on an unsustainable course. At stake is nothing less than our position in the world, our standard of living at home and our constitutional freedoms.”

Perot, a Texas businessman and billionaire, ran as an independent candidate in 1992. He dropped out of the race in July but re-entered in October, going on to nab 19% of the vote. He ran again in 1996 and won 8% of ballots cast. He backed George W. Bush in 2000, but stayed out of the presidential race in 2004. In the 2008 GOP primary, he endorsed Romney over then-rival Sen. John McCain.

In his endorsement Tuesday, Perot hit Obama for adding to the national debt as well as presiding over cuts to the military.

“At a moment when turbulence is sweeping critical regions of the world, we are increasingly unprepared,” Perot wrote. “That is wrong. It’s not the way America ought to be. It is for these reasons that I am endorsing Mitt Romney.”

The American economy is stagnant. Economic growth is insufficient to create enough jobs for a country whose population is growing. The result is unemployment stuck over 8 percent for every single month of Barack Obama’s presidency. We have 23 million Americans who are looking for work and either can’t find a full-time job, can’t find a job at all, or who have given up looking. That is wrong. It’s not the way America ought to be.

At the same time, and not unrelated, is the extraordinary explosion of federal deficits and federal debt. In the last four years during Obama’s presidency, he’s added around $5 trillion to our national debt, more than any previous president. This was accomplished by successive federal budgets that each ran deficits exceeding $1 trillion a year. It is this massive deficit spending that threatens to undermine our future standard of living. To pay for our government’s massive debts, Washington’s profligacy, our children and grandchildren will be paying interest and principal on the nation’s debt for untold years into the future. That is wrong. It’s not the way America ought to be.

Even as we have engaged in runaway domestic spending, the country has been put on the path to massive cuts in the defense budget. President Obama’s own Secretary of Defense has called the proposed cuts “devastating” to our nation’s security. History teaches that the price of military weakness always exceeds the price of preparedness. And yet at a moment when turbulence is sweeping critical regions of the world, we are increasingly unprepared. That is wrong. It’s not the way America ought to be.

It is for these reasons that I am endorsing Mitt Romney. He has spent most of his career in the private sector. He understands how jobs are created. He understands how government can get in the way of that process. As a president, he would do what this administration has been unable to do, which is reform our federal government, pare it back, and — most critically — keep it from acting as a brake on economic growth.

Perot has basically been out of the political scene since the late 90’s so I really have to wonder whether this will amount to anything. Nonetheless, it’s no coincidence that the Op-Ed is running in the largest newspaper in Iowa in a year when that state is a swing state. Perot garnered nearly 19% of the vote there in 1992, and 8.5% in 1996. If those voters are still around and still amenable to his message, it could end up swaying enough of them to do Romney some good.