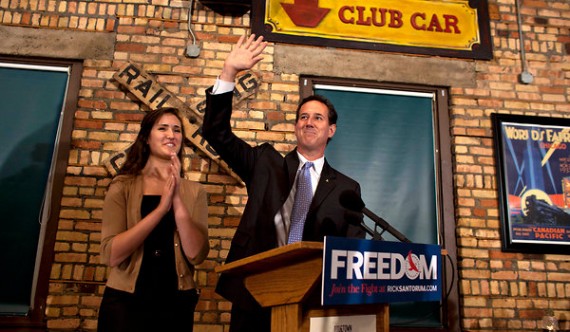 As expected, Rick Santorum walked away with a strong victory in Louisiana in terms of the raw votes cast, but the outcome will have little impact on the race the really matters now, the hunt for delegates:

Rick Santorum easily won the Louisiana Republican primary Saturday night, capturing a deeply conservative state with a hefty portion of the kind of evangelical Christian voters who have helped him claim victories in 10 other states.

The win gave Mr. Santorum a much-needed psychological boost but it will be unlikely to change the dynamics of the race. Only 20 delegates were up for grabs on Saturday, with 26 more to be allocated later. Even if Mr. Santorum were to claim most of them, he would still have only half the delegates that Mitt Romney, his chief rival, already has.

Mr. Romney’s win last week in Illinois, as well as his subsequent endorsement by Jeb Bush, the former governor of Florida, dimmed Mr. Santorum’s political prospects, although his victory in Louisiana showed how he could still complicate Mr. Romney’s efforts to capture the 1,144 delegates needed for the nomination.

In a fund-raising letter sent out Saturday night, Mr. Santorum said the results in Louisiana had sent “shock waves” through the political world.

“Tonight with our strong victory in Louisiana, our campaign has now won 11 states, tying a record and proving we can win in the West, South and Midwest,” the letter said. “Not since Ronald Reagan in 1976 has a conservative candidate won as many states as we have.”

The reference was significant — to the year President Gerald R. Ford won more delegates to the Republican convention than Mr. Reagan but not enough to secure the nomination. Mr. Ford did win the nomination, and lost the election to Jimmy Carter, but Mr. Reagan came roaring back to win in 1980. Some analysts are already talking about a Santorum candidacy in 2016.

Mr. Santorum was campaigning on Saturday night in Wisconsin, and after he arrived at a tavern in Green Bay, he thanked voters in Louisiana.

“You didn’t believe what the pundits have said, that this race was over,” he said. “You didn’t get the memo.”

The reality, of course, is that the race is effectively over and nothing that happened last night did much to change the race between Romney and Santorum. According to RealClearPolitics, as of now last night’s win resulted in Santorum winning ten delegates to Romney’s five, none of the other candidates won delegates because they failed to get above the threshold of 25% of the vote. That puts the delegate count this morning at 565 for Romney and 256 for Santorum. Revisiting the delegate math I did on Wednesday after Illinois’s primary, we find that the numbers haven’t changed significantly and that the race is still very much in Romney’s favor:

These numbers represent a slight slowing down of the pace that Romney was on after Illinois, which is to be expected given the fact that Santorum walked away with a net gain last nigh. However, it’s not a statistically significant change. You can get a better idea of just how far gone the race for delegates actually is by taking a look at this series of charts prepared by Tom Dougherty. Put simply, there is no realistic scenario under which anything other than Mitt Romney winning the nomination outright on the first ballot occurs.

Now that Louisiana is over, we’re up for a bit of a break before the next round of primaries. On April 3rd, there are contests in Wisconsin, Maryland, and the District of Columbia, with 96 delegates at stake. Romney seems foreordained to perform very well in Maryland, and in the District of Columbia (where Santorum isn’t even on the ballot). The showdown will be in Wisconsin, where Santorum had been leading in polls three or four weeks ago but now seems to be trailing according to a new Rasmussen poll. Even if Santorum does well there, though, the way delegates will be allocated that night is likely to favor Mitt Romney significantly and he is likely to walk away with the lion’s share of delegates in any case. The momentum, therefore, is in Romney’s favor and will continue to be so, meaning that the outcome of this race is inevitable. The only question is how much longer Santorum wants to pretend that he has a snowball’s chance of even coming close to Mitt Romney in the delegate race.

So the Santorum campaign and its supporters celebrated last night, but nothing really changed the reality of the fact that this race is, in any realistic sense of the word, over.